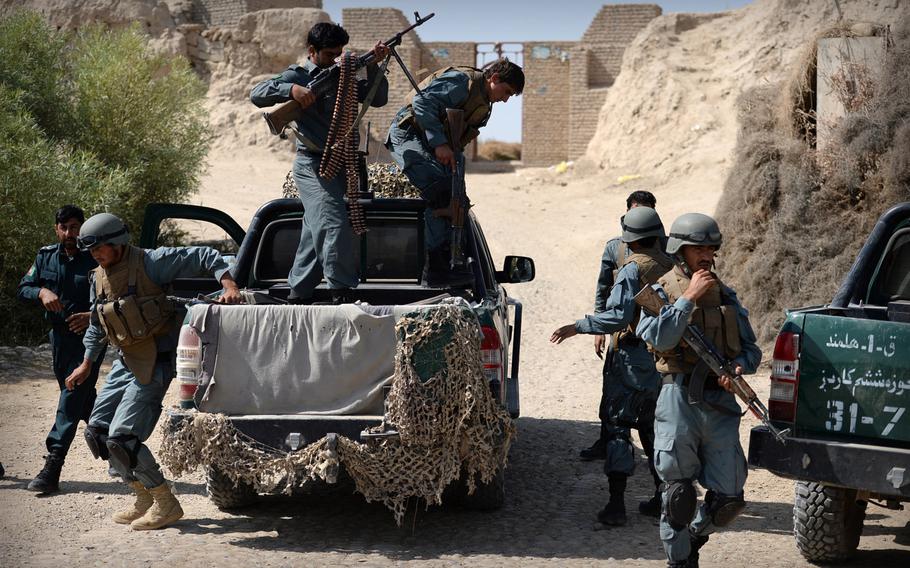 Buy Photo
Afghan policemen dismount from a truck during a patrol in Helmand province on Sept. 23, 2014. An Afghan official said Tuesday that an Afghan policeman killed 11 colleagues Monday night before fleeing the scene. (Stars and Stripes)

KABUL, Afghanistan — The Taliban have continued their assault on Afghanistan’s southwestern Helmand province with fresh attacks in two key districts, Afghan security forces said, as NATO announced that its forces last year suffered the fewest casualties since the U.S. invasion in 2001.

The latest round of fighting began Dec. 31 in Sangin and Marjah districts, a provincial spokesman said. The Marine Corps suffered significant casualties while fighting to liberate both areas in 2009-11.

The fact that the Taliban are conducting operations in winter is at variance with their usual practice of retreating to western areas of Pakistan to regroup before returning in the spring, when the weather is more suitable for carrying out operations.

Though Taliban activity has increased in recent months, U.S. and NATO troops, who have been performing a mainly train-and-advise mission since combat operations formally ended in 2014, are generally now at less risk of death or injury

NATO confirmed on Monday a local news report that its forces in 2016 suffered the fewest casualties since the 2001 invasion. Fifteen NATO personnel were killed last year, including two Romanians, nine Americans and four civilian staff.

Since 2015, the Taliban have made successive inroads in Helmand, including capturing several districts. Afghan security forces have suffered some of their most significant casualties trying to defend the province.

Omar Zwak, a spokesman for Helmand’s provincial governor, said Monday that offices belonging to Sangin’s district governor and its police chief remained under government control. “There is no concern that the district will fall,” he said.

The Afghanistan Analysts Network said in report last year that Afghan forces are struggling to fend off the insurgents because of a lack of coordination among army and police units and an understaffed military. Meanwhile, the Taliban have strengthened their position through the use of commando teams and the capture of Afghan ammunition and vehicles from checkpoints and bases they overran.

The United States, which pulled out of Helmand in 2014, has had to send special operations teams back to the area to help Afghan forces battle the insurgents. A NATO spokesman declined on Monday to comment on whether U.S. forces were involved with this latest set of clashes.

Fazal Muzhary, an analyst with the Afghanistan Analysts Network, said the continuation of operations into the winter marks a shift in Taliban policy. Fewer fighters are returning to Pakistan this winter than in previous years. “They don’t want to lose” their gains, he said. “In order to keep them, they must be present.”

According to iCasualties.org, the NATO coalition suffered the greatest number of casualties — 711 — in 2010. The numbers have declined since then, with the greatest drop in 2013, to 161 from 402 the previous year.

Much of the front-line fighting was handed over that year to Afghan security forces.

Among those killed in Afghanistan last year was Special Forces Staff Sgt. Matthew McClintock, who was killed in a firefight in the city of Marjah, Helmand province, in January. Another Green Beret, Staff Sgt. Matthew Thompson, was killed in August, also in Helmand, while assisting Afghan forces with a clearing operation. Three troops died as a result of a suicide bomb attack at Bagram Air Field in November.