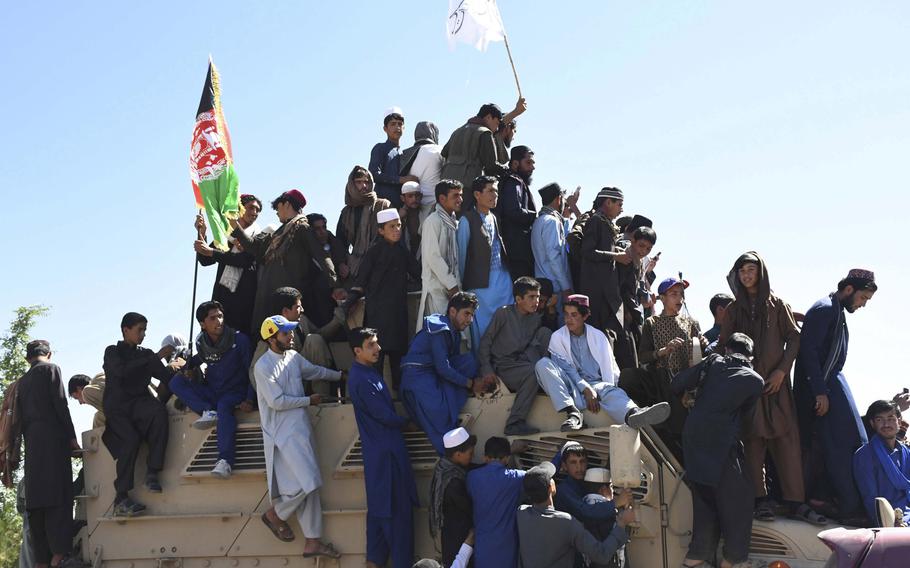 Buy Photo
A crowd flying both Taliban and Afghan flags climbed aboard military vehicles for impromptu parades last June in Logar province during an unprecedented truce between the Taliban and the Afghan government.The Taliban have not yet responded to a three-month cease-fire offer by Kabul. (J.P. Lawrence/Stars and Stripes)

KABUL, Afghanistan — The Taliban did not respond as of Monday afternoon to a three-month cease-fire offer, a deal put forward by the Afghan government amid insurgent offensives throughout the country.

Afghan President Ashraf Ghani’s new offer is dependent on the Taliban following suit, unlike a unilateral cease-fire declared in June that the Taliban eventually joined for three days during the Muslim holiday Eid al-Fitr.

The United States, Pakistan, the United Nations and NATO voiced support for Ghani on Sunday.

“The United States welcomes the announcement by the Afghan government of a cease-fire conditioned on Taliban participation,” Secretary of State Mike Pompeo said in a statement. “The last cease-fire in Afghanistan revealed the deep desire of the Afghan people to end the conflict, and we hope another cease-fire will move the country closer to sustainable security.”

In recent days, the Taliban have launched several high-profile attacks on cities across Afghanistan, leading to the deaths of hundreds of security personnel, destruction in the key city of Ghazni and the capture of several small military bases in northern Afghanistan.

Taliban militants continued their attacks by kidnapping 170 passengers aboard three buses in northern Afghanistan on Sunday night. Afghan forces rescued 149 hostages and were fighting to free the remaining 21, Afghan officials told The Associated Press on Monday.

Hardliners in the Kabul government have pushed back against Ghani’s offer. Amrullah Saleh, a prominent political figure and the nation’s former spymaster, accused Ghani on Twitter of “ridiculing our fallen heroes and pursuing a policy of sell out & appeasement.”

Citizens in Baghlan, where the Taliban killed dozens of government troops and police officers last week, published a letter on Twitter Monday criticizing Ghani and saying he was no different than the Taliban leader. The letter said citizens would not follow the cease-fire and will shoot at any “terrorists” who enter the city.

The Taliban have several options in responding to a ceasefire (and) they have the chance to build goodwill among the people of Afghanistan, who are desperate for peace, said Graeme Smith, a consultant to the International Crisis Group, a private, nonprofit think tank.

“But the Taliban also have the option of allowing an undeclared or partial ceasefire, giving their fighters a chance to catch their breath after the recent push on the battlefield — without giving a political victory to President Ghani,” Smith said.

Ghani’s truce offer in June led to scenes of government soldiers and militants hugging and taking selfies in celebration.

It’s normal for cease-fires to break down, but both sides showed surprising levels of discipline during the June cease-fire, Smith said.

“The June ceasefire was like a rookie hitting a home run on the first pitch, the very first time he steps to the plate,” Smith said.

Since then, however, insurgents have increased attacks across the nation.

In July, American diplomats, in a reversal of policy in Afghanistan that favored talks between the Taliban and the Kabul government, opened direct negotiations with Taliban representatives, according to media reports. Insurgents also recently sent delegations to Uzbekistan and Indonesia to discuss peace prospects.