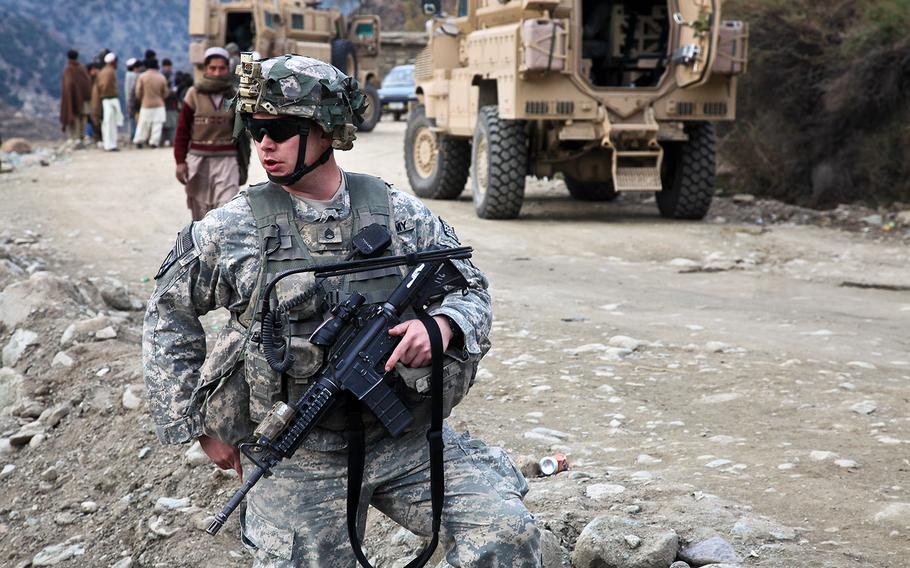 “About 2,000 insurgents are involved in the fight,” Saidkhail said in a telephone interview. Since Sunday, hundreds of local Afghan volunteers have poured into Dangam to shore up the district’s defenses, he added.

The battle in Kunar coincided with a deadly Taliban suicide attack Tuesday on a Pakistani military-run school in Peshawar, leaving at least 141 dead, most of them children. The Pakistani Taliban claimed responsibility for the massacre, saying the attack was in response to Islamabad’s counterterrorism operations in the North Waziristan border region.

Kunar province, among others that dot the area along the Pakistan border, has been one of the most violent regions of Afghanistan throughout the 13-year war. The eastern provinces, long known to be safe havens for insurgents operating on both sides of the border, were the last areas handed over to Afghan security forces in June.

In Dangam, the security forces and Afghan locals have killed 18 insurgents and wounded 28 in intense fighting, Saidkhail said, adding that “there are mostly Pakistani armed men” among the wounded and dead.

He said security officials in Dangam have requested reinforcements from the Afghan National Army.

On Tuesday, Afghan defense officials in Kabul confirmed that army units had moved into the district and were engaged in combat. Ministry officials said five Afghan soldiers have been killed and four wounded.

But the Afghan army’s response in Dangam has been bogged down by mines and bombs planted by the Taliban along the main roads to deny access to the district, Saidkhail said.

U.S. troops from 3rd Infantry Division are based at Tactical Base Gamberi in eastern Afghanistan, one of three new “Train, Advise, Assist Commands” created by ISAF to support operations in the country. The new commands are part of the coalition’s new mission focused on training and advising the Afghan army and police after most foreign ground forces withdraw from Afghanistan at the end of December.

A three-week spate of bombings in Kabul and elsewhere in the country, including those specifically targeting foreign guest houses and a British Embassy convoy, have raised tensions between Afghanistan and Pakistan in the run-up to ISAF’s December deadline.

Gen. Mohammad Zahir, who has since stepped down as Kabul police chief, said last month the explosive material used in most of the recent Kabul attacks was “military grade” ordnance used by the Pakistani military.

Kabul police spokesman Hashmatullah Stanakzai confirmed Zahir’s comments to Stars and Stripes, tying Pakistan to the ongoing inquiry into the attacks. Stanakzai said the weapons and materials used in the strikes were consistent with those used by foreign terrorist organizations, including those based in Pakistan.