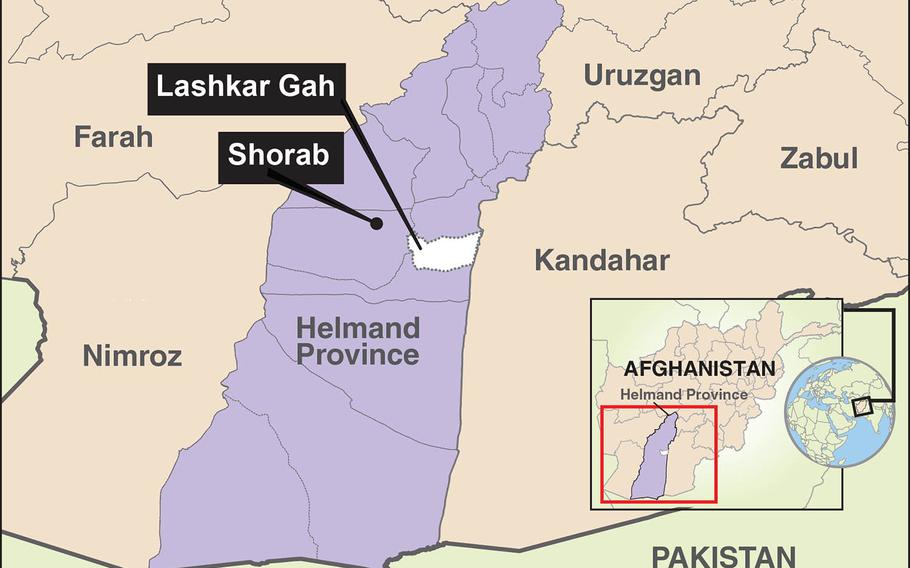 A Taliban squad attacked a key base that houses U.S. military advisers and soldiers in southern Afghanistan early Friday, killing a top Afghan commander, before being repelled by Afghan forces and U.S. Marines, officials said.

The complex attack on Camp Shorab in the largely insurgent-controlled Helmand province occurred during a pause in peace talks in Doha, which could bring an eventual end to U.S. military involvement in the country.

Reports suggest the attackers were able to enter the base and that U.S. forces were involved in repelling the assault, though there are conflicting reports.

The attack began before dawn on Friday and clearance operations were said to be ongoing into the late afternoon. At least five Afghan troops were killed and 12 more injured, the provincial governor’s office said in a statement.

Among the dead was the Afghan army garrison commander, a security forces official told Stars and Stripes, speaking on condition of anonymity.

At least 20 attackers, including three suicide bombers, were killed, the statement said.

There were no American or coalition casualties in the attack, Col. Dave Butler, spokesman for the Resolute Support mission, said on Twitter.

Citing reports, Butler told reporters that the attackers managed to gain access to the base, but were stopped by Afghan forces. Marines had “mitigated the threat” of a smaller attack on base while Afghans responded to a larger one, Butler told some reporters.

Omar Zwak, a spokesman for the provincial governor said the militants were unable to breach the compound. Their attack ended in a parking lot, he said.

Shorab was once a sprawling U.S. Marine base known as Camp Leatherneck for much of the war is home to a contingent of hundreds of U.S. troops, mostly Marines, training the security forces.

The Taliban immediately claimed credit for the assault, saying in a statement that the fighting was ongoing and that there were a large number of casualties among the coalition forces. The militant group often embellishes its claims.

The attack comes a day after the U.S. envoy leading the Doha talks said the negotiations had been put on hold until this weekend.

“Both sides will take the next two days for internal deliberations, with plans to regroup on Saturday,” Zalmay Khalilzad wrote Thursday on Twitter.

Past rounds of talks with the Taliban focused on American troop withdrawal in exchange for guarantees of no attacks against the U.S., but it was unclear how close Khalilzad was on a deal on those issues. The envoy was also expected to press the Taliban to hold direct talks with the Kabul government, which the U.S. has long urged but the militants have so far refused.

Helmand has been the site of some of war’s heaviest fighting and has suffered the second-most insurgent attacks in recent months, behind Farah, said a report by the Special Inspector General for Afghan Reconstruction in January. Nine of Helmand’s 16 districts were controlled or influenced by insurgents as of last fall, the report found.

After U.S. and coalition combat operations ended in 2014, security in the province faltered. The provincial capital, Lashkar Gah, was on the verge of falling to the insurgents in 2016.

The U.S. deployed a team of Army advisers to shore up local forces in the province, which top U.S. officials said had disintegrated under poor leadership and corruption.

In early 2017, a task force of U.S. Marines returned to the province to advise the army’s 215th corps and the national police’s 505th zone.