Taliban kill dozens in storming of Afghan base 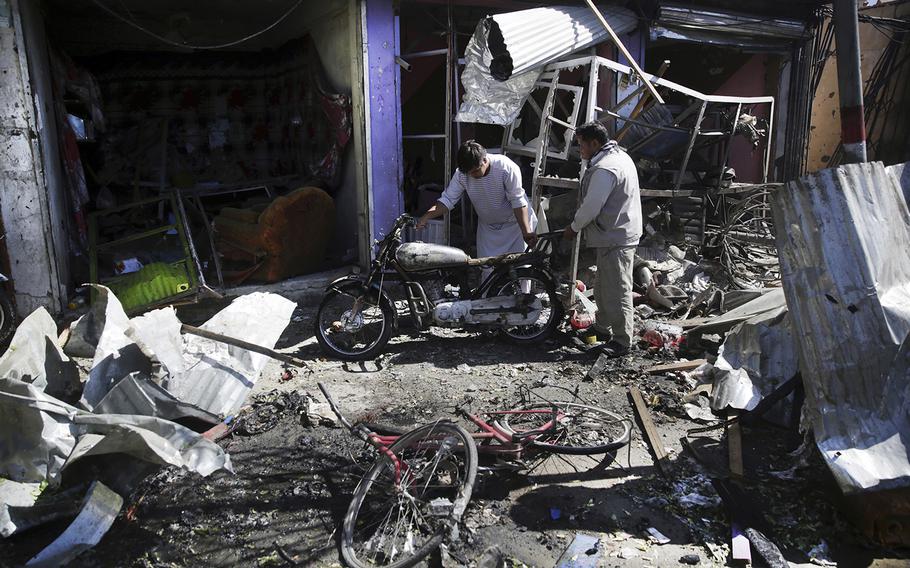 Men look at the remains of their properties at the site of a suicide attack in Kabul, Afghanistan, Monday, July 24, 2017. The Taliban claimed responsibility for the Monday attack and launched another attack on an Afghan military base in southern Kandahar province on Tuesday. (Massoud Hossaini/AP)

The attack was the latest in a string of deadly assaults by the militants, who in recent weeks have stepped up operations across the country aimed at overthrowing the U.S.-backed government.

Guerrillas stormed the base in Khakrez district “from four sides,” killing 26 soldiers and injuring 13 others, said Gen. Mohammad Radmanish, the Defense Ministry’s deputy spokesman. About 80 insurgents were killed and the army remained in control of the base, Radmanish said.

“Our forces responded to the attack and defended the compound until additional forces arrived,” he said.

The Taliban said in a statement that 74 Afghan soldiers were killed and that they seized weapons and vehicles.

Tuesday’s attack came after Taliban militants overran two districts in northern Faryab province and western Ghor province over the weekend. The recent fighting highlights growing insecurity in all corners of the country more than 15 years after the invasion that ousted the Taliban from power.

The Defense Ministry said in a statement Wednesday that Kohistan district in Faryab had been recaptured from the militants, while a clearing operation was underway in Ghor’s Taywara district.

Meanwhile, fierce fighting was continuing in eastern Paktia province, where the Taliban on Tuesday said they had overrun Jani Khel district, a stronghold of the Taliban-affiliated Haqqani Network. The government denied the district had fallen.

On Monday, the Taliban claimed responsibility for a suicide car bomb in Kabul that killed at least 24 civilians and injured more than 40. The group has recently carried out several deadly attacks in the capital.

Afghan forces have been moving to recapture territory lost to the guerrillas. Last week, government troops reclaimed Nawa district in southern Helmand province after the militants held it for nine months.

At the start of this year’s fighting season, more than 10 percent of Afghanistan’s 407 districts were under insurgent control or influence, while 33 percent were contested, according to U.S. military assessments.