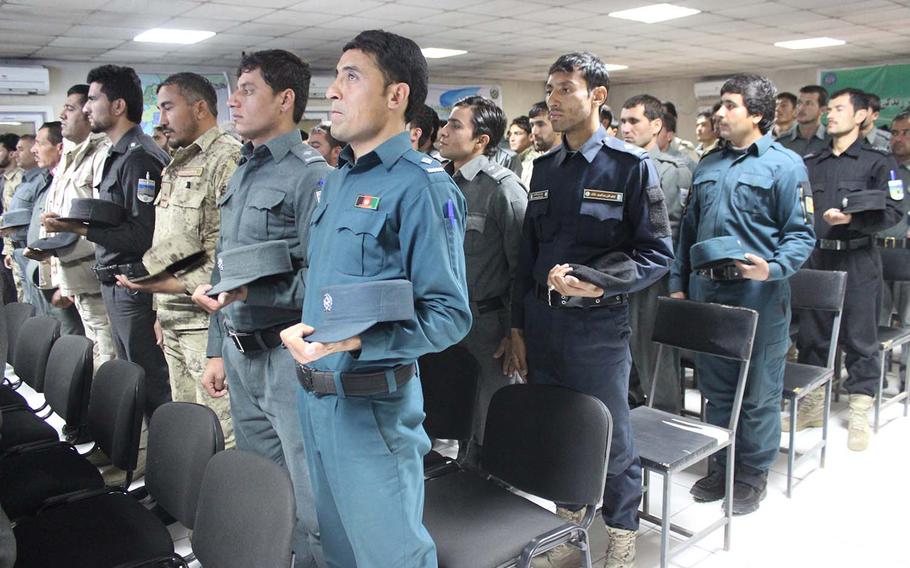 Members of the Afghan National Police stand to be recognized during their graduation from the Explosive Ordnance Disposal course at Central Training Center-Kabul on Feb. 20, 2016. The Taliban hanged two Afghan police officers in Paktika province on May 10, 2016. (Charity Edgar/U.S. Navy)

The Taliban had captured the two policemen in an ambush in the Jani Khel district Saturday, said Dadullah Khan, acting police chief of Paktika province.

The Taliban had threatened “vengeance” for the executions, which were carried out after the Afghan government promised to get tougher with insurgents in the wake of a massive bomb attack last month that killed nearly 70 civilians and wounded about 350.

Many Afghans welcomed the government’s harsh punishment of insurgents and criminals. The Taliban have launched their spring offensive and rejected overtures from the government to join peace talks. President Ashraf Ghani announced recently that the government would focus on fighting the insurgents rather than trying to bring them to the peace table, which he had made a key goal of his presidency. The Afghan intelligence agency said the executions should be a warning to those who would consider terrorist attacks.

United Nations and human rights organizations, meanwhile, condemned the government executions, cautioning that they would not bring justice or security.

“Delivering justice requires adhering to the highest standards, not flaunting a hanging for the purpose of revenge,” Patricia Grossman, senior Afghanistan analyst for Human Rights Watch, said in a statement.

The government said the six men hanged Sunday at Pule Charkhi prison on the outskirts of Kabul had been found guilty by three courts and in accordance with Afghan and Islamic law.

Rupert Colville, a spokesman for the U.N. High Commissioner for Human Rights, questioned Afghanistan’s criteria for fair trials and the transparency of its process. The UN has called on the Afghan government to institute legal reforms that would allow death sentences to be commuted to life imprisonment.

But many Afghans are calling for more executions. Some have told local media that the hangings could inspire greater public trust in the government, while the Afghan Defense Ministry’s spokesman told Tolo News it would bolster the morale of Afghan military and police forces on the battlefield.

Nazeefullah Karim, 52, a tribal elder in the village of Hussainkhail in Kabul’s Bagrami district, told Stars and Stripes he thinks the government should have been executing people convicted of killing innocent Afghans from the very beginning.

“They (Taliban) are killing innocent Afghans everywhere, but nothing happens if they are arrested,” he said. “I was happy to hear that those who were involved in carrying out bomb blasts and helping suicide bombers were hanged to death.”

Members of the Afghan parliament this week have called for more executions of death row prisoners who have been convicted of terrorism and other crimes. There are about 130 such people currently in custody in Afghanistan.

The Taliban have called the government executions a “sign of cowardice and downfall.”