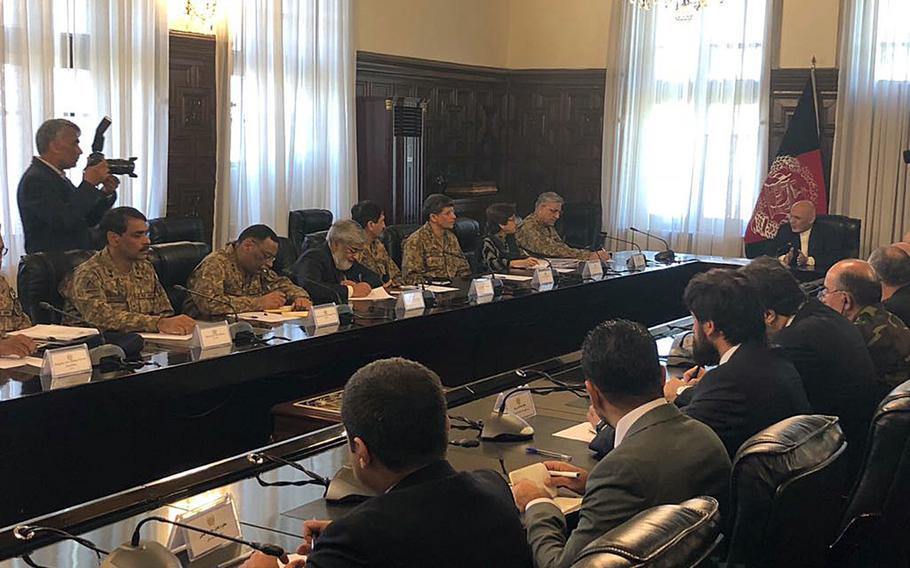 Afghan President Ashraf Ghani meets with Pakistan's Chief of Army Staff Gen. Qamar Javed Bajwa and others in Kabul, June 12, 2018. Ghani announced last week that an eight-day truce would begin Tuesday and stretch through the Eid holiday that marks the end of the Muslim holy month of Ramadan. (Luke Hoogendam/U.S. Marine Corps)

Afghan President Ashraf Ghani meets with Pakistan's Chief of Army Staff Gen. Qamar Javed Bajwa and others in Kabul, June 12, 2018. Ghani announced last week that an eight-day truce would begin Tuesday and stretch through the Eid holiday that marks the end of the Muslim holy month of Ramadan. (Luke Hoogendam/U.S. Marine Corps) 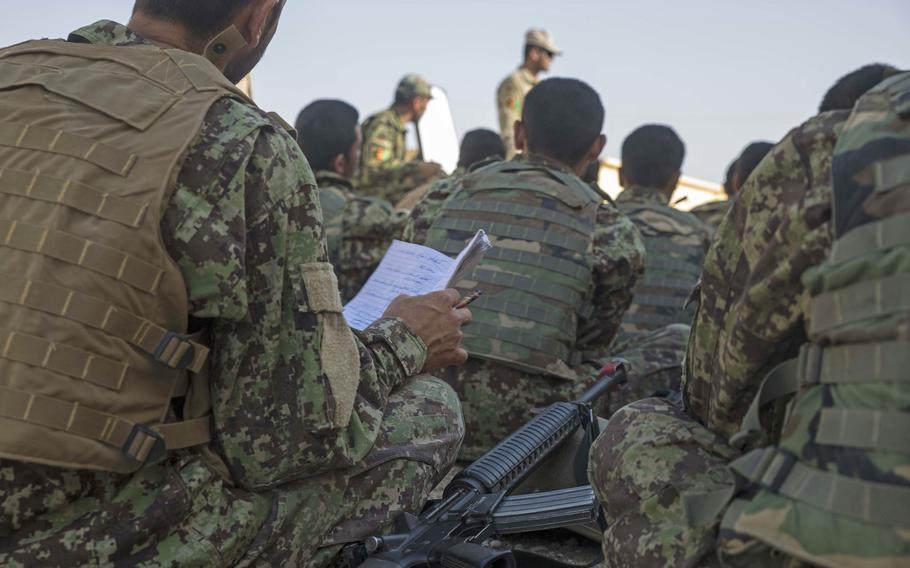 A soldier with the Afghan National Army's 215th Corps takes notes in an offensive and defensive tactics course at Camp Shorabak, Helmand Province, June 3, 2018. Afghan President Ashraf Ghani announced last week that an eight-day truce would begin Tuesday and stretch through the Eid holiday that marks the end of the Muslim holy month of Ramadan. (Luke Hoogendam/U.S. Marine Corps)

KABUL, Afghanistan — The Taliban remained on the offensive Wednesday, mounting attacks in northern Afghanistan a day after the Kabul government’s pause in combat operations against the group began.

At least eight Afghan soldiers were killed and 16 injured in overnight clashes with the Taliban in Badakhshan province’s Jarm district Wednesday, said Gen. Mohammad Radmanish, acting defense ministry spokesman. He would not say whether any posts were overrun. Earlier media reports said as many as 20 soldiers had been killed.

Afghan President Ashraf Ghani announced last week that the eight-day truce would begin Tuesday and stretch through the Eid holiday that marks the end of the Muslim holy month of Ramadan.

The gesture aimed at bringing the Taliban into peace talks halted Afghan, U.S. and coalition offensives against the Taliban, but not against other militants.

However, the Taliban said it would only maintain a holiday cease-fire with Afghan troops for three days of Eid, and that foreign troops remain targets.

Over the weekend, attacks killed scores of Afghan troops, and Tuesday saw no ebb in Taliban violence. The Taliban overran a remote district in northwestern Faryab province, set off an explosives-laden Humvee in eastern Ghazni province and fought an hourslong gun battle after assaulting a district in northern Sar-e-Pol province.

The series of attacks killed at least 20 people and wounded dozens more, according to local media reports. Nearly three dozen soldiers were reportedly missing after the attacks.

Pakistan has long been accused of backing the insurgency and the Trump administration strategy for ending the Afghan conflict includes applying greater pressure on Islamabad.

Ghani discussed efforts to extend the cease-fire and set the conditions for reconciliation with the Taliban, Pakistan’s army said in a statement.

The Taliban are believed to control the most territory they have since their 2001 ouster. In recent weeks, they have blockaded key highways and Afghan forces have struggled to wrest back control.

Nicholson has said the insurgent’s tactics seek to inflict casualties and grab headlines, and that the militants have focused on out-of-the-way districts to avoid coalition and Afghan air power, which has been stepped up since last summer.

In one of a series of defiant messages released on Tuesday, the Taliban complained that the bombing of their Voice of Sharia radio station in Ghazni province was an attack on their freedom of expression.

The insurgents, who have claimed responsibility for attacks that killed Afghan and foreign journalists, blamed the strike on a sortie of five U.S. aircraft.

A U.S. official said an Afghan sortie took out a broadcast tower, not a radio station.

“The claim by the Taliban speaks volumes with regards to the capabilities of the Afghan air force,” said Army Lt. Col. Martin O’Donnell, NATO Resolute Support spokesman. “It was two Afghan air force A-29s, not five U.S. aircraft, that conducted the strike.”

This week, U.S. forces are expected to focus on battling the local Islamic State affiliate, which is active mainly along the eastern border with Pakistan. Afghan and coalition forces are not prohibited from defensive action under the cease-fire, and officials told local media that security had been beefed up in the Afghan capital.

Some analysts have questioned whether Taliban leadership, believed to be safeguarded mostly in Pakistan, have enough control over their commanders to enforce their own truce.

That remains to be seen until Eid is announced, likely Thursday night, but an audio recording provided to Stars and Stripes purports to include the voice of the Taliban’s shadow governor in Helmand, ordering his fighters not to attack during the holiday.

In another sign of holiday charity, the Taliban said it released 15 prisoners in Helmand province on Monday — 14 security forces members and one tribal leader. It is common during the end of Ramadan for authorities on both sides to pardon prisoners.

The truce so far has not softened the group’s position on peace talks with Kabul.

In an Eid message Tuesday, Taliban supreme leader Hibatullah Akhundzada renewed his call for direct negotiations with the United States. Washington has rejected direct talks and has said the peace process should be led by the Afghan government.