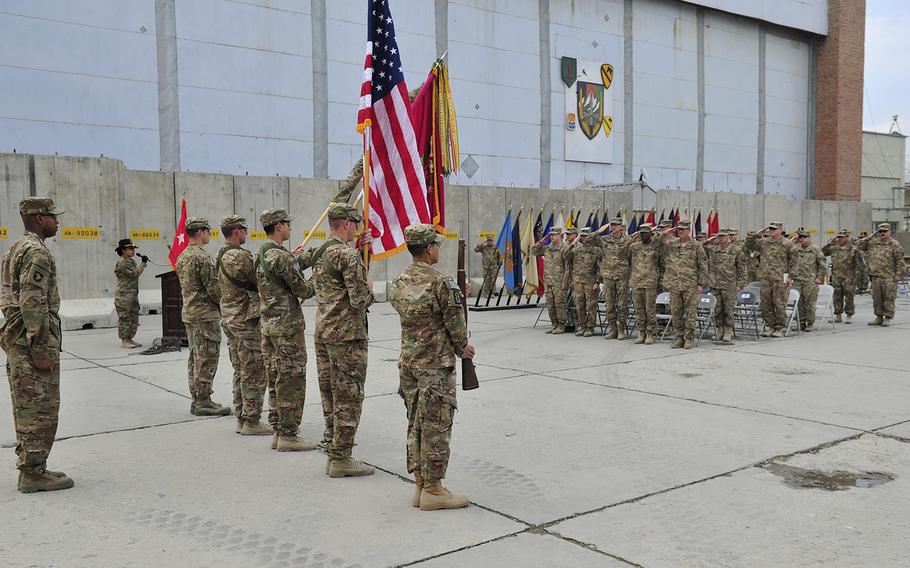 Soldiers render honors to the flag during the playing of the national anthem at the transfer of authority ceremony between the 63rd Ordnance Battalion and the 184th Ordnance Battalion at Bagram Air Field in Afghanistan on Nov. 29, 2016. Two days after President Donald Trump took office, the Taliban asked him to remove all U.S. troops from Afghanistan but hinted at a willingness to work with the United States. (Bob Harrison/U.S. Army)

KABUL, Afghanistan — Two days after President Donald Trump took office, the Taliban asked him to remove all U.S. troops from Afghanistan but hinted at a willingness to work with the United States.

The insurgent group posted a statement on its website Sunday calling on Trump to “put an end to the invasion.” But it also asked him to “help countries with their development” rather than with “bloodshed and destruction.”

The call for foreign forces to leave Afghanistan is consistent with past Taliban demands. But the mention of development appeared to be new. In recent months, the group has expressed support for infrastructure and humanitarian projects inside the country.

A Taliban spokesman was not immediately available to clarify the message’s intent.

The Taliban have been leading an insurgency to regain control of Afghanistan since they were removed from power after the U.S.-led NATO invasion in 2001.

Afghanistan’s government has been trying to get the group to the negotiating table since 2008. The two parties held direct talks in July 2015. Since then, the Taliban have been emboldened by their success in regaining large amounts of territory, and they now refuse to negotiate until their preconditions, including the removal of all foreign forces, are met.

Sunday’s statement said that responsibility for finding a solution to the conflict was a burden that Trump now carried. “You have spent more than a trillion dollars here,” the message said, “but you haven’t achieved anything other rather than killing innocent Afghans and destroying their orchards and villages.”

U.S. policy has shifted since the invasion, from trying to defeat the Taliban militarily to supporting an Afghan-led political solution.

The Trump administration has not yet articulated a position on Afghanistan. One of the key issues the president faces is whether to keep, increase or decrease the current U.S. troop level of 8,400.

The Taliban on Sunday advised the new president not to send in more troops. “This issue can’t be solved by increasing the number of soldiers. It wasn’t solved that way in the past,” the group said, referring to the fact that NATO at one point had more than 150,000 troops in the country.