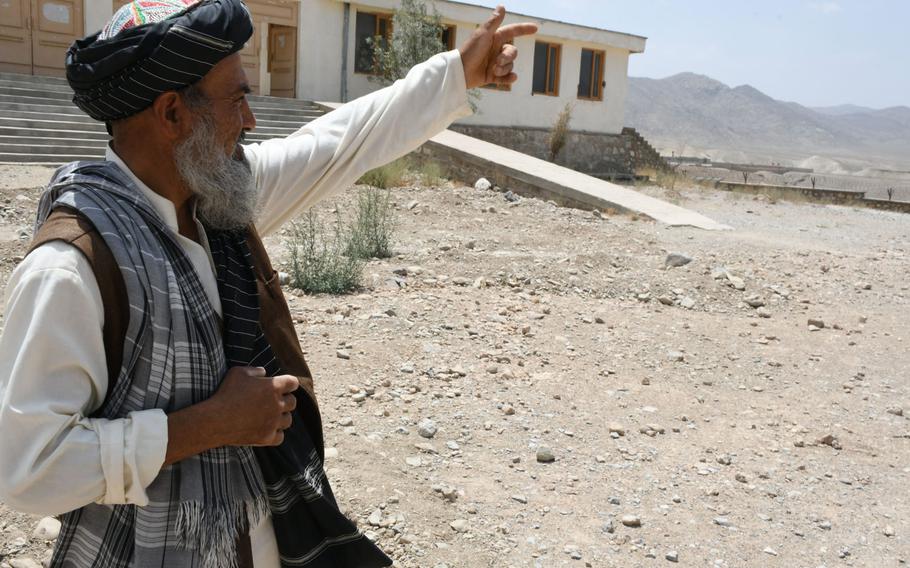 Khak-e-Jabar resident Adam Khan on Wednesday, July 18, 2018, points to a village in the distance where the Taliban recently began to operate. (Phillip Walter Wellman/Stars and Stripes)

Khak-e-Jabar resident Adam Khan on Wednesday, July 18, 2018, points to a village in the distance where the Taliban recently began to operate. (Phillip Walter Wellman/Stars and Stripes) 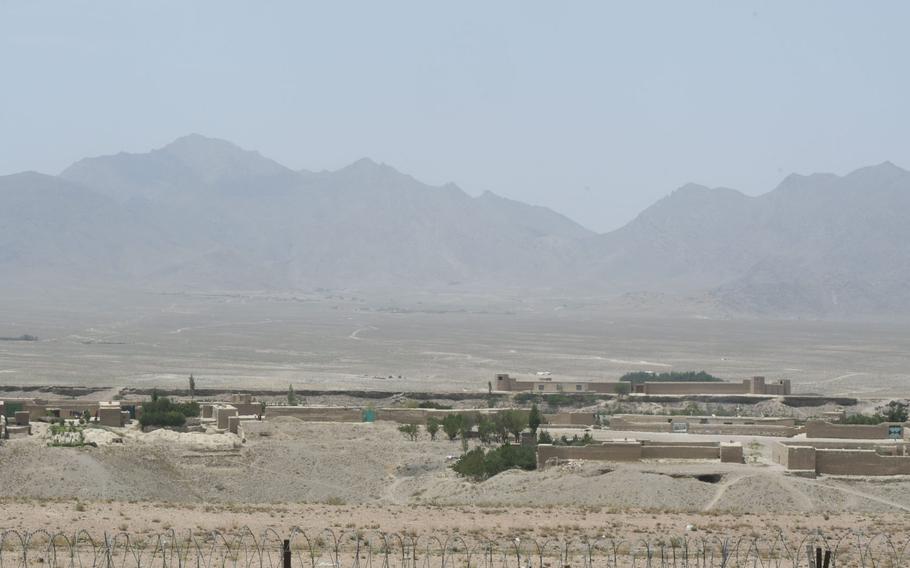 A view from the governor's compound in Khak-e-Jabar district, Kabul province on Wednesday, July 18, 2018. The Taliban have begun operating in a village in the distance. (Phillip Walter Wellman/Stars and Stripes) 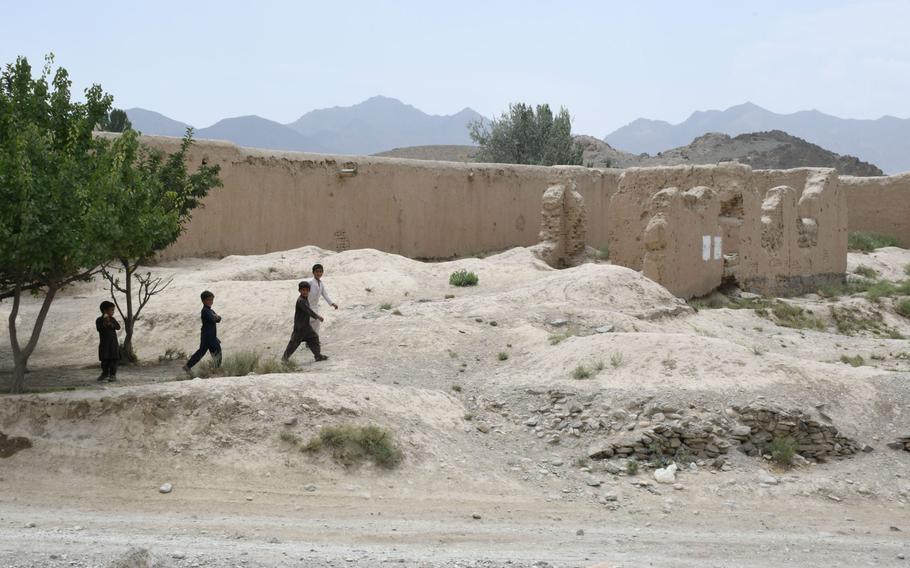 Boys walk in Khak-e-Jabar district, Kabul province on Wednesday, July 18, 2018. The Taliban are said to have taken control of dozens of villages in the district since a U.S.-backed cease-fire by the Afghan government last month. (Phillip Walter Wellman/Stars and Stripes) 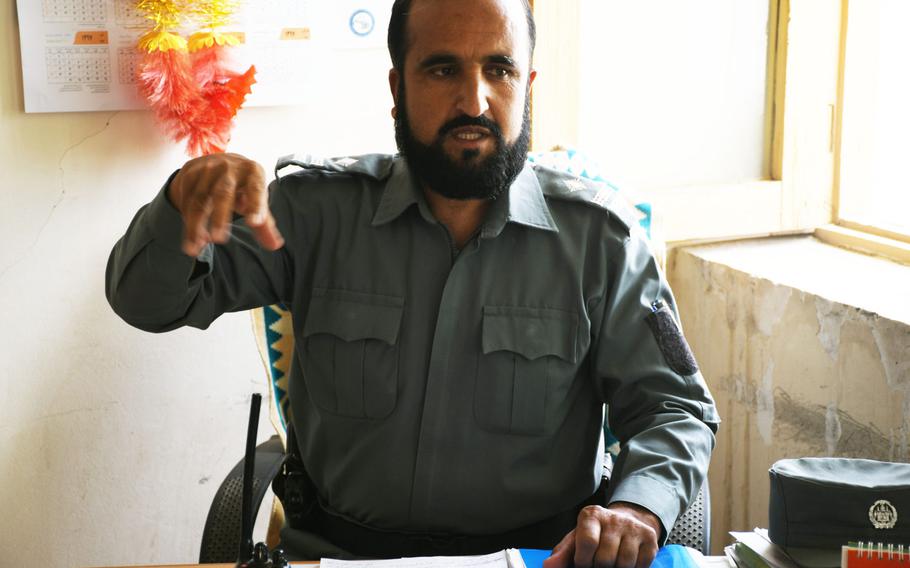 Noor Rahman Haqpal, the deputy police commander for Khak-e-Jabar district in Kabul province sits at his desk on Wednesday, July 18, 2018, explains how the Taliban's presence in the district has grown since a cease-fire last month. (Phillip Walter Wellman/Stars and Stripes) 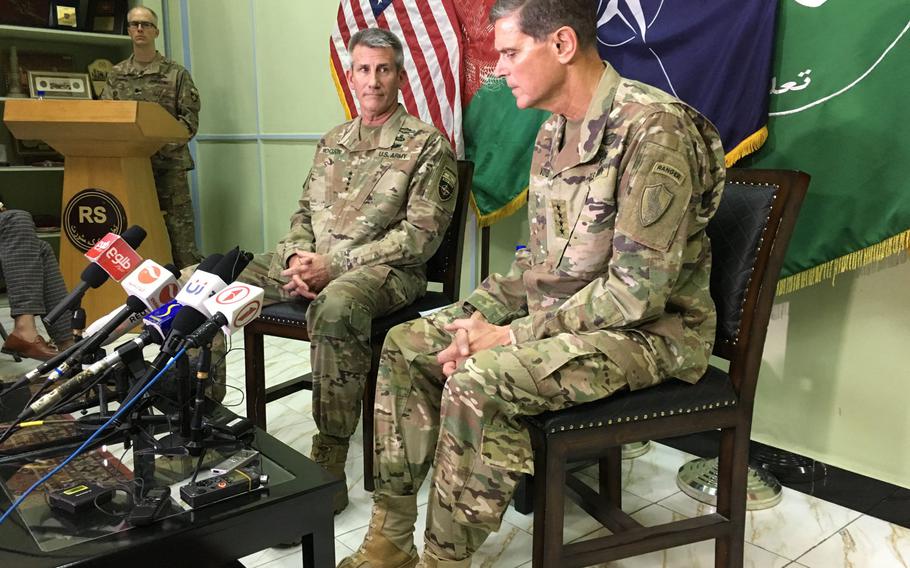 KHAK-E-JABAR DISTRICT, Afghanistan — Adam Khan arrived at the governor’s compound in this mountainous district near the Afghan capital recently to complain about Taliban advances in the area — the result, he said, of a U.S.-backed cease-fire by the Afghan government.

“It’s frightening,” Khan said, pointing from the elevated compound to his relatives’ village about a mile away, where the Taliban are now active.

“They’re asking people for food and money and to help them build a road on the mountain,” he said. “I’m just a farmer. If they come to my village I won’t be able to help. Then what? Will they beat me? Will they kill me?”

Officials at the governor’s compound, which houses modest police and army units, said Khan is among a steady stream of locals who have been lodging complaints about the tangible effects of President Ashraf Ghani’s unilateral cease-fire, which ended on June 30 and has been widely lauded for helping advance the country’s peace process.

They fear another truce, which the government is considering implementing next month, could help the Taliban take full control of the district and, in the words of one local, “create a battlefield on Kabul’s doorstep.”

Afghan and U.S. officials appear to believe it’s a risk worth taking.

There have been unprecedented signs of progress toward peace negotiations this year — including Ghani’s offer of unconditional talks and the Taliban’s declaration in a recent open letter to the American people calling for dialogue. Officials say they are committed to building on this progress, which reached a high when Afghan, U.S. forces and Taliban forces all ceased fighting over the three-day Islamic holiday of Eid al-Fitr last month, the first such truce in the nearly 17-year-old war.

Ghani extended the government’s cease-fire by 10 days, hoping the Taliban would reciprocate, but they did not. Instead, locals say their fighters used the opportunity to extend control over dozens of villages in Khak-e-Jabar district about 25 miles from Kabul, which they first entered during Eid.

“The Taliban came in, studied the landscape and then stayed here,” tribal elder Miragha said at his home in Malikkhail village while hosting several guests for lunch. “We were shocked at how quickly they came; there are many of them.”

Miragha, who like many Afghans uses only one name, said that the insurgents had been beating people whose relatives work for the government and security forces, telling them their relatives must quit their jobs. If the situation doesn’t improve, many families would be forced to leave their homes, Miragha said, his guests nodding in agreement.

“I don’t know if it was good for other areas, but for us, the cease-fire created this problem,” he added to more nods.

The Afghan Defense Ministry told Stars and Stripes that Khak-e-Jabar was the only area where the recent cease-fire exacerbated the security situation, and that it was “paying serious attention to it.” Several operations were launched in recent weeks to fight the insurgents, a ministry official said, but local police say they operations have been futile.

The government is considering another cease-fire in late August to coincide with another Islamic holiday, Shah Hussain Murtazawi, the president’s deputy spokesman, told Stars and Stripes. He wouldn’t, however, specify whether another cease-fire without Taliban reciprocation was likely. A spokesman for the insurgents this week said it was too early for the group to comment on any future cease-fire it might implement.

Speaking to reporters in Kabul on Monday, Gen. John Nicholson, the U.S.’s top commander in Afghanistan, said that despite potential setbacks — like those being seen in Khak-e-Jabar — the U.S. would comply with and welcome another truce by the Afghan government, even a unilateral one.

“Of course,” the Taliban could take advantage of such a cease-fire Nicholson said, “But the overall strategic objective of advancing the peace process, in our view, is worth the tactical risk.”

Despite continuing violence across the country and a record number of civilian deaths, Nicholson said increasing prospects of peace talks with the Taliban show the U.S. strategy in Afghanistan is working.

“Some of these traditional metrics (for gauging the war’s success) like levels of violence and population control, while still relevant and important, should not outweigh the importance of advancing the peace process,” Nicholson said. “This advancement towards peace is extremely relevant and, in a way, perhaps, more important than some of these other metrics.”

Noor Rahman Haqpal, the deputy police commander for Khak-e-Jabar district said while the government and its U.S. backers should be commended for pushing for peace, any unforeseen outcomes that occur along the way, like the current situation in his district, must be properly dealt with.

“If the central government doesn’t pay enough attention to what is going on here, it’s very clear there will be chaos,” Haqpal said. “And not just here, maybe in the future it will spell trouble for the capital too.”