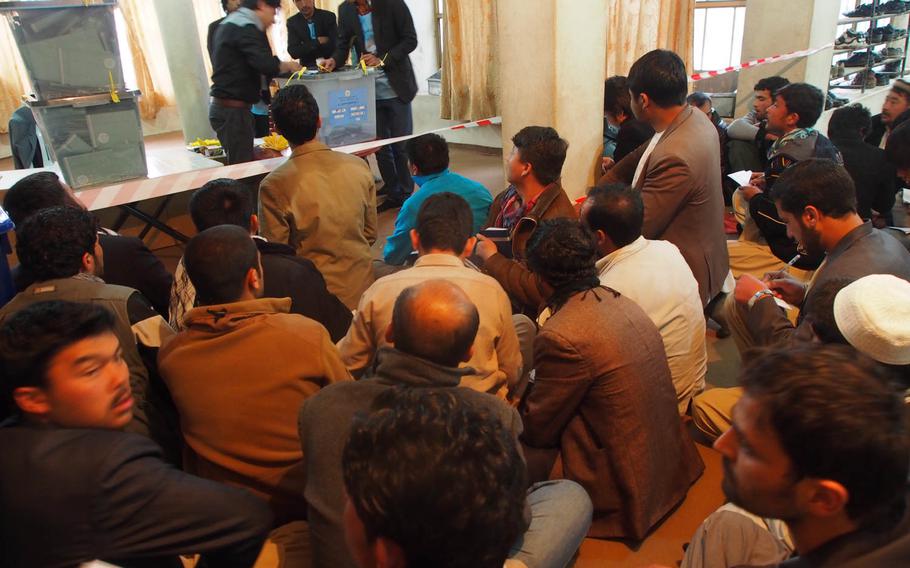 Election officials prepare to count ballots in front of a group of observers at a polling station in Kabul on Saturday, April 5, 2014, following the country's historic presidential vote. (Heath Druzin/Stars and Stripes)

Election officials prepare to count ballots in front of a group of observers at a polling station in Kabul on Saturday, April 5, 2014, following the country's historic presidential vote. (Heath Druzin/Stars and Stripes) 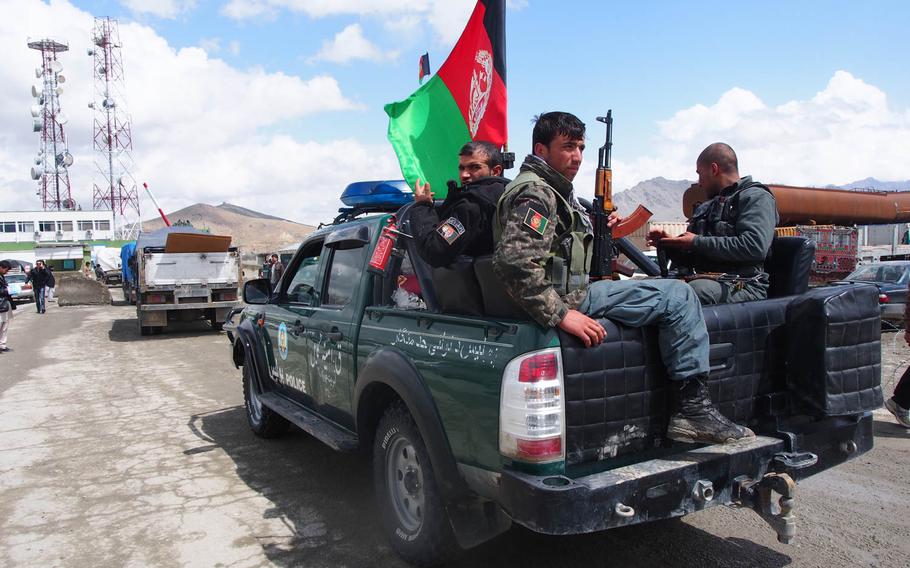 Afghan National Police officers accompany a convoy of trucks carrying ballots to Afghanistan's Independent Election Commission Sunday, April 6, 2014, a day after the country's presidential election. Experts say the Taliban was weakened by the vote, but the next president will have a monumental task in improving a government seen by many as corrupt and ineffective. (Heath Druzin/Stars and Stripes) 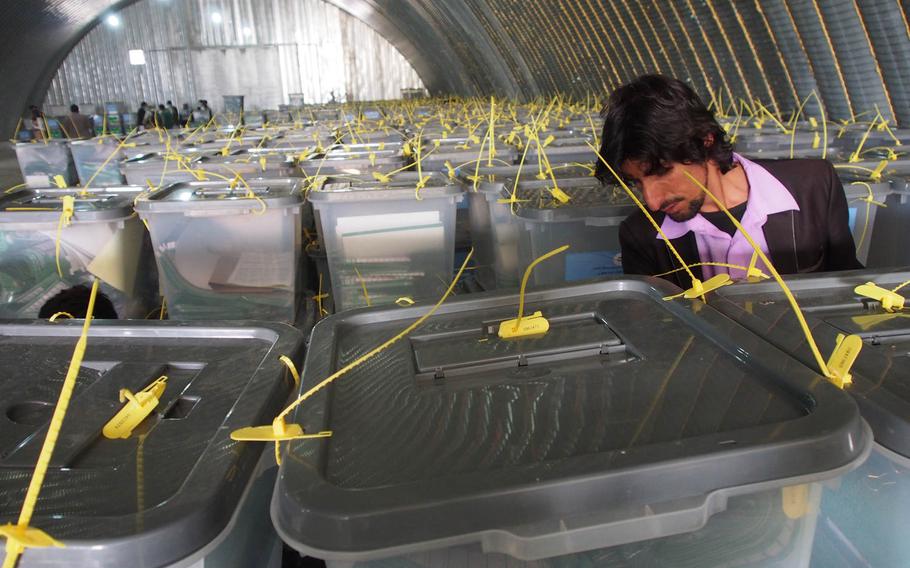 A man inspects ballot boxes at a storage facility at Afghanistan's Independent Election Commission on Sunday, April 6, 2014, a day after the country's historic presidential vote. The winner won't be know for some time, but whoever prevails will have the task of governing a country beset by corruption and with an entrenched insurgency. (Heath Druzin/Stars and Stripes) 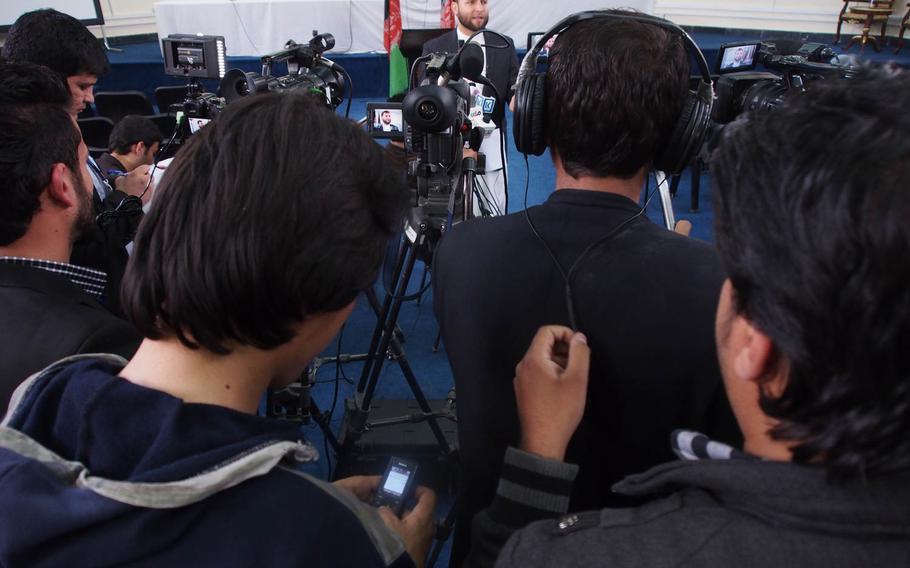 Zia-Ul-Haq Amarkhail, head of Afghanistan's Independent Election Commission Secretariat, speaks to reporters on Sunday, April 6, 2014, the day after Afghanistan's presidential election. With a crowded field and the likelihood no candidate will get a majority of votes, Afghans may not know who their next president is for months. (Heath Druzin/Stars and Stripes)

KABUL — The long lines outside many polling stations in Afghanistan for Saturday’s crucial presidential election not only raised hopes for the country’s future, but for many represented an embarrassing setback to the Taliban, which had vowed to disrupt the vote.

The day was not bloodless. At least 20 people were killed in violence across the country Saturday, among them seven military personnel, nine police and four civilians, Afghan Interior Minister Mohammad Umer Daudzai told reporters. And in many rural areas, turnout was reported to be nearly nonexistent as residents cited fears of the Taliban.

But the fact that the Taliban were apparently unable, or unwilling in the face of heavy security presence, to project violence or intimidation beyond their traditional strongholds was seen by many Afghans as a blow to the insurgent group, at least in the war of perceptions.

Not only Afghans pinned their hopes on the election. U.S. and NATO leaders also hailed the relatively high turnout and mostly peaceful balloting as a sign of Afghans’ commitment to a democratic future and, as U.S. Defense Secretary Chuck Hagel put it,“a testament to the tireless efforts and sacrifices of American, ISAF, and Afghan personnel.” The role of the Western-trained Afghan security forces was key, said Marine Gen. Joseph Dunford, commander of the International Security Assistance Force, who described their efforts to secure the elections as “extraordinary.”

In taking stock of what the election means for the country and the Taliban insurgency, what is clear is that much remains unclear.

Analysts and officials cautioned that it is too soon to draw major conclusions from an election day that could see the first democratic transfer of power in Afghanistan’s history. The votes remain untallied, allegations of fraud remain uncounted and unconfirmed.

About 7 million people voted, according to election commission officials, which, barring massive fraud, would mark about a 50 percent increase over the validated votes from 2009. In that election, more than one million votes were thrown out and President Hamid Karzai’s main challenger, Abdullah Abdullah, quit in disgust before a scheduled run-off. Nearly 1,000 of roughly 7,300 polling centers were closed Saturday because of security fears. Of those, most were in more rural areas, election officials said.

There were few surprises on the preliminary lists of areas where low turnout and allegations of fraud were reported, most of them in traditional Taliban strongholds where intimidation is a powerful tactic and sympathy for the insurgent movement often lingers.

Judging by the dozens of Tweets sent throughout election day, and two lengthy messages condemning the election, the Taliban were closely watching the vote. Their post-election press release claimed that Afghans boycotted the election en masse and that the Taliban launched more than 1,000 successful attacks.

Voters and the Afghan government largely rejected the Taliban’s claims.

Many voters saw the election as a direct challenge to the Taliban, and plenty of ink-stained middle fingers (which the insurgent group threatened to cut off) were aimed at the Taliban in photos posted on Twitter, though the tweets represented the minority of Afghans with access to social media.

Sami Yousafzai, a journalist who has spent years covering the Taliban in Pakistan, said the election turnout was likely to hurt the Taliban, especially given the initial reports of a large show of voters in Kandahar, the group’s spiritual birthplace.

“Overall, I think the nationwide election was a slap on the face of the Taliban because the people (rejected) the Taliban mindset,” he said. “After this election, I don’t see much future for the Taliban.”

A mid-level Taliban commander in Helmand province echoed the Taliban leadership’s claim that widely reported large turnout was Western propaganda, but said the insurgents saw a victory simply in forcing the Afghan military to mobilize its entire force across the country to protect the vote.

Yousafzai said the Taliban are capable of continuing a low-grade insurgency indefinitely and likely to increase attacks after the election. He said it’s still key for the next government to try to restart peace talks and that the Taliban is likely to enter such talks in a weakened position.

“It’s still important to bring them into the political process,” he said.

But Martine van Bijlert, co-director of the Kabul-based Afghanistan Analysts Network, cautioned against drawing conclusions too early about the effect of the elections on the insurgent group. For starters, she said, it’s unclear if their efforts to disrupt the election were thwarted or if they simply pulled back, waiting for a better opportunity when Afghan security forces are not on such high alert.

“If they had hoped this election would be a huge propaganda victory for them, that didn’t happen, but what that means long term — for their position or capabilities or military strength or position on peace talks — it’s a bit early to call,” van Bijlert said.

For many Afghans, the debate over Taliban capabilities may be largely academic. Insecurity remains the top national concern for Afghans in general, according to a study released in December by the Asia Foundation, which surveyed more than 9,000 Afghans across every province. But corruption is a close second, and when asked what the biggest local problems were, insecurity was fifth, after more everyday issues like unemployment, electricity supply, roads and the availability of drinking water.

The large, enthusiastic turnout in cities contrasted with reports of low turnout and violence in rural areas, highlighted a growing divide between the more secure and affluent urban populations and the rural regions where as much as three-quarters of Afghans are estimated to live. And it underscored that corruption still could undermine the election even if the Taliban could not.

“What we saw with the euphoric turnout in the cities and the painful silence in many rural areas illustrates the divide that is ripping the country apart,” said Graeme Smith, a senior analyst for the International Crisis Group. “This will be the central challenge for the next president to bring those rural areas into the fold.”

If the Afghan government falters in the coming years, it may be more due to its own failings than any particular success by the Taliban, analysts say.

Malik Niaz Mohammed, a tribal leader in Nangarhar Province just east of Kabul, said the people in his area are willing to support the government, but are turned off by what they see as rampant corruption and inefficiency.

That view was echoed by Mohammed Elyas, a college student in Jalalabad, who asserted that government programs that brought schools, roads and clinics to the area won may people over, but that that support is often undermined by what residents see as a failure to crack down on corruption or to rein in warlords.

“Even a government dog is better than the Taliban,” he said. “But on their main responsibility of security and peace, the government has failed.”

Whether Karzai’s successor can change that remains to be seen.

Now that the first round of presidential voting is finished, a long process of counting and sorting out complaints begins. The winner may not be announced for weeks and even then, it’s likely none of the eight candidate will win a majority, which would mean a second round of voting.

Already, the major candidates have made mention of possible fraud, jockeying for position as what is sure to be a contested count gets under way.