Taliban capture another district on the eve of expected cease-fire 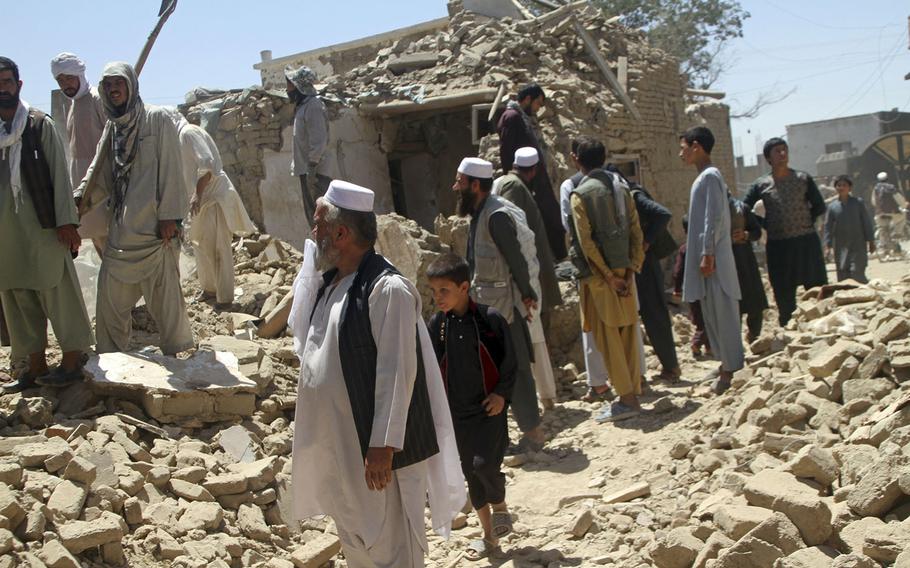 KABUL, Afghanistan — A district in northern Afghanistan fell to the Taliban early Sunday morning, just hours before the government was expected to announce a cease-fire to correspond with a major Islamic holiday.

Afghan security forces had been battling the Taliban in Faryab province’s Bulcheragh district for a week, before about 100 government employees — mostly police officers — surrendered to the insurgents, provincial council leader Tahir Rahmani told Stars and Stripes.

“We knew they were going to surrender because the district center was under a lot of pressure,” Rahmani said. “There was no air or ground support.

“We shared this information with the government several times, but they didn’t do anything.”

Those who surrendered also provided the Taliban with U.S.-funded military vehicles, weapons and ammunition, a Taliban statement said.

The collapse of Bulcheragh district is the latest in a string of Taliban offensives.

On Aug. 10, the insurgents stormed Ghazni, about 100 miles from Kabul. They captured and held entire neighborhoods before retreating after five days of fighting, which included U.S. airstrikes.

More than 100 Afghan security forces personnel and up to 250 civilians died, according to early United Nations estimates.

While the fight in Ghazni raged, Taliban fighters late on Aug. 12 overran a military base in Faryab’s Ghormach district, killing or wounding over three dozen soldiers. Officials described a situation similar to nearby Bulcheragh district, where soldiers weren’t provided with reinforcements and ran out of food, water and ammunition.

The uptick in violence counters the U.S. military’s narrative of progress in its longest war, now in its 17th year, and happened prior to an expected cease-fire over the Eid al-Adha holiday, which begins Tuesday.

President Ashraf Ghani’s office issued a statement on Saturday suggesting a cease-fire would soon be announced. It follows a July truce, during which the Taliban also laid down arms for three days.

Reuters on Tuesday reported that the Taliban was also considering another cease-fire to mark Eid al-Adha.

Afghanistan’s 1TV reported on Saturday that the Taliban had demanded the release of 1,000 prisoners in return for a cease-fire.

Some Afghans worry that the Taliban could take advantage of another cease-fire, considering the strength they’ve shown recently.

Speaking to reporters last month, Gen. John Nicholson, the U.S. top commander in Afghanistan, said the U.S. would support another government cease-fire but would remain vigilant.