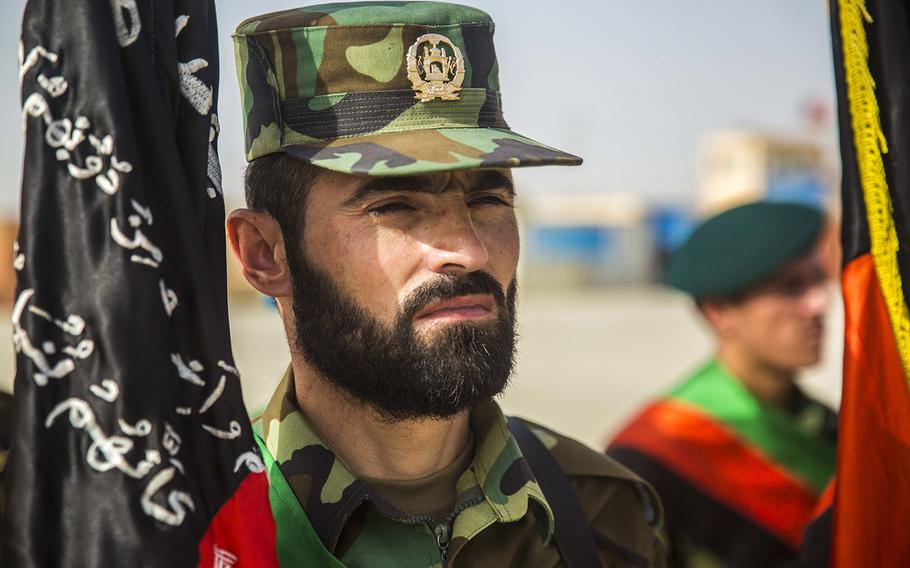 In a July 14, 2018 photo, an Afghan National Army soldier stands at attention during 2nd Kandak, 2nd Brigade's Operational Readiness Cycle graduation ceremony at Camp Shorabak in Helmand province. Hundreds have died after the Taliban launched an offensive in the area in mid-October, leading the U.S. to conduct airstrikes against the militants, officials and news reports said on October 14, 2020. (Luke Hoogendam/U.S. Marine Corps)

KABUL, Afghanistan — A deadly Taliban offensive in Afghanistan’s Helmand province has drawn a crescendo of accusations that the militant group is openly flouting a deal under which all American troops could leave the country by next spring, and jeopardizing month-old peace talks with the government.

The Taliban spent six months planning the attacks targeting Helmand’s capital and other districts, in which hundreds of militants, troops and civilians have been killed or injured, and thousands have been forced from their homes, provincial governor Mohammad Yasin Khan said in a statement Wednesday.

Peace talks between the Afghan government and the militants, which were called for in an agreement the Taliban signed with the U.S. in February, were delayed for an equal amount of time, during which violence has erupted in the country.

Afghan troops were deployed to quell the attacks in Helmand, which began Sunday, and the U.S. launched days of airstrikes against the militant group, something it has done sparingly since signing the agreement, which calls for the militants not to attack U.S. and other coalition forces but does not explicitly bar them from attacking Afghan troops and cities. U.S. officials have said, however, that they have a verbal commitment from the Taliban to do neither.

The airstrikes on the militants’ positions over the weekend were in defense of Afghan troops and consistent with the February deal, USFOR-A spokesman Col. Sonny Leggett said Monday on Twitter.

“USFOR-A has & will continue to provide support in defense of the ANDSF under attack by the Taliban,” he tweeted, using the acronym for Afghan security forces.

Khan said more strikes have targeted the Taliban since Monday, but USFOR-A has not confirmed that the coalition was involved in those. The Afghan air force has also been flying sorties against the Taliban, Khan said.

The offensive in Helmand began days after President Donald Trump said in a tweet on Oct. 7 that all U.S. troops “should” be home from Afghanistan by Christmas.

That tweet, which is said to have blindsided American military leaders, delighted the Taliban, the group said in a statement. But it raised fears in many Afghans that, “if Trump follows through, abruptly dropping the U.S.-Taliban agreement for a conditions-based and gradual pullout of the about 4,500 remaining U.S. troops by May, the country might plunge again into full-scale war and political mayhem,” the Washington Post wrote.

The chairman of the Joint Chiefs of Staff, Gen. Mark Milley, insisted in an interview with NPR that further troop reductions would be “conditions-based.”

“The key here is that we’re trying to end a war responsibly, deliberately,” he said in the interview Sunday.

While one of the conditions of the February deal has been met — the belated start of intra-Afghan talks — Milley hedged when asked about others, both in the peace deal and in verbal agreements with the Americans, that would influence the withdrawal of American troops.

Although Helmand’s governor said “the enemy has failed” in its plan to breach Lashkar Gah and clean-up operations were beginning Wednesday, local residents and officials said the clashes were continuing.

“We are hearing heavy gunshots in the northwest of the city,” Mohammad Aslam told Stars and Stripes by telephone. “In some areas, the Taliban appear to be moving close to the city.”

The United Nations said the clashes were intensifying. Hundreds of Afghan troops and civilians have been killed or wounded, thousands have been forced to flee their homes, and critical services, including health care, electricity and telecommunications, have been cut off, it said.

Roadside bombs have been planted around Helmand, locals said.

International medical charity Doctors Without Borders, which goes by its French acronym MSF, opened a hospital as an overflow facility after the main trauma clinic in Lashkar Gah rapidly reached capacity and struggled to treat people injured in the fighting, it said on Twitter.

Among patients treated by MSF doctors was a pregnant woman who was hit by a stray bullet that killed her unborn child, it tweeted.

The Taliban onslaught in Helmand was not isolated. The group has carried out 575 attacks against Afghan security forces and civilians throughout the entire country in the last two weeks, said Tariq Arian, a spokesman for the Interior Ministry.

USFOR-A commander Gen. Scott Miller has called on the Taliban “to immediately stop their offensive action in Helmand Province and reduce their violence around the country.”

His message was echoed by the top American diplomat in Afghanistan, Charge d’Affaires Ross Wilson, who said on Twitter that the latest surge in violence was “not consistent with the U.S.-Taliban agreement” and would lead “only to unacceptable loss of life and destruction.”

“It should stop so that all parties can move toward a lasting and much-needed peace for all #Afghans,” he wrote.