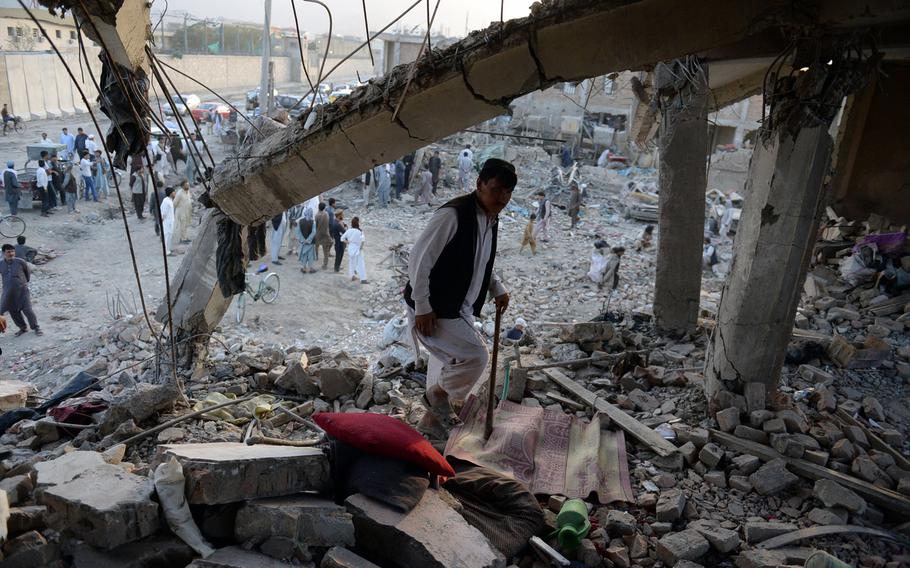 A man walks through the ruins of a building destroyed by a truck bomb in Kabul, Afghanistan. The string of attacks on Aug. 7, 2015, prompted many Afghans to lash out at Pakistan, which they accuse of harboring militants. (Josh Smith/Stars and Stripes)

A man walks through the ruins of a building destroyed by a truck bomb in Kabul, Afghanistan. The string of attacks on Aug. 7, 2015, prompted many Afghans to lash out at Pakistan, which they accuse of harboring militants. (Josh Smith/Stars and Stripes) 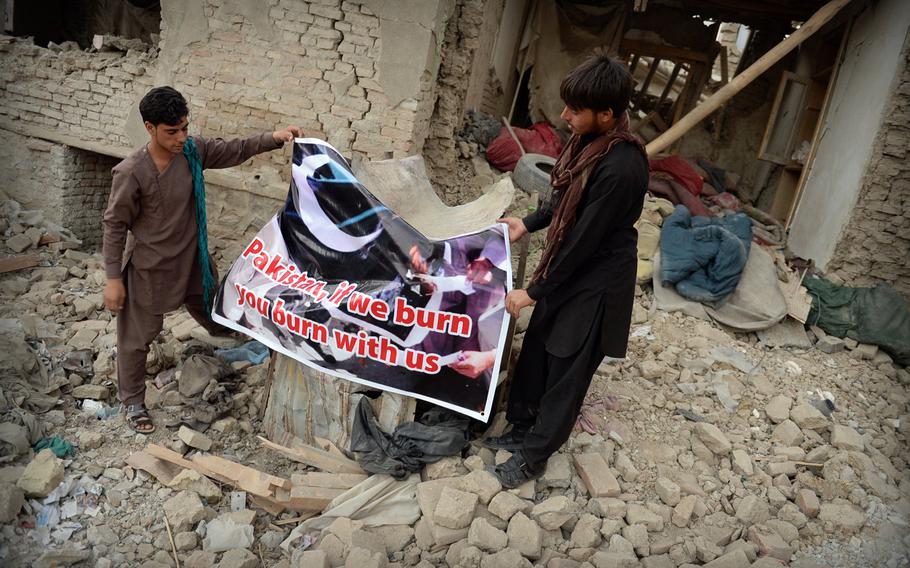 Two men hang up a sign at the site of the deadly truck bombing that occurred in Kabul, Afghanistan, on Aug. 7, 2015. Many residents blamed Pakistan for supporting and harboring insurgents who carry out such attacks. (Josh Smith/Stars and Stripes)

KABUL, Afghanistan — The wave of bombings that killed at least 60 people and left hundreds injured could be a show of force by the Taliban to strengthen their position ahead of peace negotiations, some analysts believe.

The brazen attacks on Friday and Monday, whose victims included an American Green Beret, have raised fears that the Taliban may have abandoned a negotiation strategy as part of the leadership shakeup after confirmation that longtime leader Mullah Mohammad Omar had died two years ago in Karachi, Pakistan. A second round of exploratory peace talks, which opened last month in Pakistan, was indefinitely postponed after the announcement of Mullah Omar’s death.

However, some longtime Afghan analysts believe that the Taliban leaders have not entirely abandoned the idea of talks with the Afghan government. The leadership first needs to prove it’s a potent force, and one that is independent of Pakistan, too.

“The Taliban have plenty of reasons to want to show that they are strong militarily, first to the Afghan government ... and secondly to their own ranks to boost morale at a difficult time,” Kate Clark, a senior researcher with the Afghan Analysts Network, said in a report issued Monday. “Such attacks as were seen in the capital might also be a message to Islamabad and Kabul not to treat the Taliban as marionettes.”

Many Afghans blame Pakistan for the escalating attacks. Some vented their anger Monday by shouting “Death to Pakistan” at the scene of a massive truck bomb that leveled a city block last week.

The angry rhetoric is striking, as it comes only months after Afghan President Ashraf Ghani stood side by side with Pakistani President Nawaz Sharif in Kabul and vowed to work together to combat terrorism.

Since he assumed office in September, Ghani has made peace talks with the Taliban a priority of his administration. He went on to stake significant political capital on reaching out to the Pakistanis, who are often blamed by distrustful Afghans for tacitly helping the Taliban and providing a safe haven for the group’s leadership.

For a short while, Ghani’s gambit appeared to have paid off, as Pakistan hosted discussions between peace delegations from the Taliban and the Afghan government. But those talks fell apart last month after it was revealed that Mullah Omar was dead. His successor, Mullah Akhtar Mansour, suddenly disavowed the negotiations despite the fact that as Mullah Omar’s No. 2 he had overseen preparations for the talks.

But it’s too soon to write off all hope that the peace talks will resume, as any such negotiations are inherently fragile, said Nishank Motwani, a Canberra, Australia-based specialist who studies the region. “We need to be careful to not make too much of the peace and reconciliation process because it had just started.”

The continuing violence is a sign that the Taliban and their Pakistani backers are still trying to better position themselves for any possible political settlement, argues Mohammad Younas Fakor, a political analyst in Kabul. That’s a view that’s seconded by Jacqueline L. Hazelton, a professor at the U.S. Naval War College in Newport, R.I. “Fighting and talking usually go hand in hand,” she said.

If the Taliban continue to show that they can hit what are supposed to be hard targets in the capital, they can gain an advantage in negotiations with the Afghans, Hazelton said.

“What the Taliban might want to do with that leverage in peace talks is an open question,” she added. “It could be integration into the official government power structure, it could be a tacit or explicit arrangement giving the Taliban ruling power in some parts of the country, for example.”

Motwani, though sounding a cautious note on negotiations, has few illusions about the insurgent group.

“The Taliban are a malign actor, and they have been carrying out such attacks the whole time,” he said. “Their intention is probably to create a disproportionate amount of fear that would make Afghans doubt that their government is capable of protecting its people. With the security forces stretched thin and experiencing a high rate of desertion, none of this bodes well for the long term, especially when the capital can’t be protected.”

Afghan and coalition military officials often point to the Taliban’s terror-style attacks in the capital as evidence of desperation after the failure of repeated efforts by the insurgents to occupy and hold several district centers in the face of government counterattacks. In recent months, the Taliban have managed to assemble hundreds of fighters and mount surprise attacks on isolated and poorly defended district centers. But they have generally been pushed out within days by Afghan forces, which are operating alone since the withdrawal last year of most international troops.

Despite his harsh statements about Pakistan, Ghani still says he sees working with Islamabad as the key to solving the root problems that are fueling the violence in Afghanistan. In his speech on Monday, he promised to dispatch a delegation to Islamabad to ask the Pakistanis to crack down on the Taliban and other groups.

Pakistan’s government has condemned the latest attacks and says it still plans to work with Afghanistan. “We stand shoulder to shoulder with our Afghan brethren in their hour of grief,” the Pakistani government said in a statement.

But actual cooperation between the two countries remains elusive. A proposal to share intelligence sparked outrage in Kabul, for example. Many Afghans are wary of the Pakistani intelligence organization, which they accuse of aiding, supporting and even directing the Taliban. And ground forces on both sides of the disputed border regularly clash.

Pakistan launched a massive operation against its own domestic insurgent groups after militants massacred 132 school children in December. Western military leaders in Kabul backed Ghani’s outreach, arguing that the mistrust that existed under former Afghan President Hamid Karzai had not paid dividends.

After nearly a decade and half of international intervention and war, there is broad agreement that the situation in Pakistan is one of the keys to peace.

Western officials, particularly those in the United States, have been hesitant to push Pakistan too hard for fear it could throw the nuclear-armed country into chaos, Motwani said. That had tragic results for the NATO-led military operation, he said.

“By the time Obama ordered the surge it was too late,” Motwani said. “One of the key reasons the surge failed to produce lasting results was that politically they didn’t want to address the real source of the problem, which is Pakistan. In many ways America subordinated its Afghan policy to its Pakistan policy.”

For any progress to be made, “There has to be a fundamental reorientation in how Pakistan engages with Afghanistan,” he said. “Until that happens Afghanistan will continue to pay the price.”