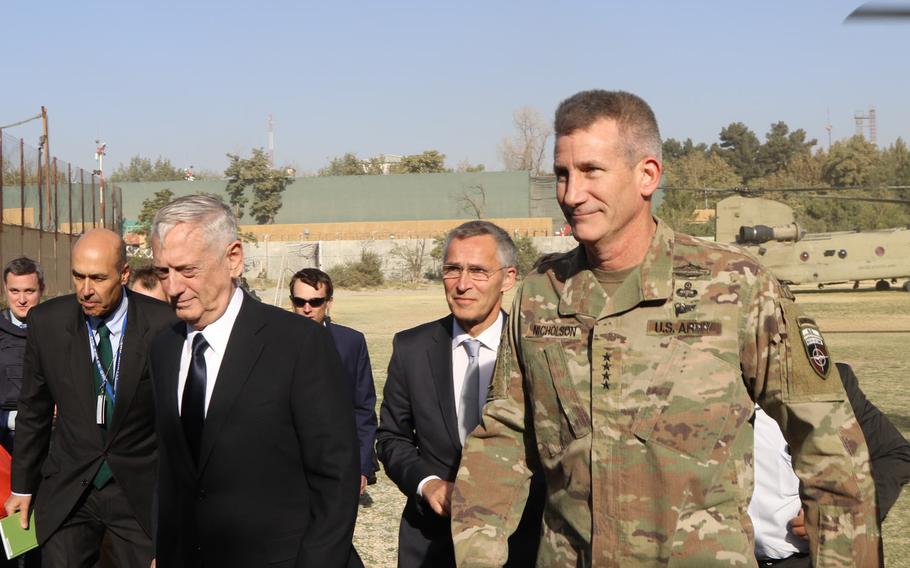 KABUL, Afghanistan — Rockets and mortar shells slammed into Kabul’s international airport and surrounding neighborhoods Wednesday, killing one person and injuring 11 others while Defense Secretary Jim Mattis and the NATO chief were in town to discuss ways to stabilize Afghanistan.

U.S. forces responded with an airstrike to help Afghan security force subdue militants who launched the attack, according to NATO’s Resolute Support mission. One of the missiles malfunctioned, causing several casualties, RS said.

No one was hurt on the airport grounds, Afghan authorities said. Afghan officials said several civilians were wounded when a rocket struck a home near the airport but did not specify that the casualties were caused by the errant U.S. projectile.

“U.S. forces acting in support conducted an airstrike,” the U.S. military said in a statement. “Tragically, one of the missiles malfunctioned, causing several casualties. Resolute Support deeply regrets the harm to non-combatants. We take every precaution to avoid civilian casualties, even as the enemies of Afghanistan continue to operate in locations that deliberately put civilians at very high risk.

Mattis called the attack a crime during a later news conference.

“This is a classic definition of what the Taliban are up to right now,” he said. “It defines their approach to how they see their role here.”

During the same news conference, Mattis said the U.S. was committed to protecting Afghan civilians amid fears that the U.S.’s new strategy for conducting America’s longest war could result in more non-combatant casualties.

“We aren’t perfect guys, but we are good guys,” Mattis said, vowing to protect Afghan civilians.

Mattis held closed-door talks with Afghan President Ashraf Ghani and NATO Secretary-General Jens Stoltenberg in an unannounced trip to Kabul, his first to the country since the Trump administration announced its new strategy for Afghanistan.

Speaking to reporters after the talks, all three men commended the strategy’s regional approach, which aims for greater cooperation from countries like India and Pakistan.

While the allied strategy includes working more with nations in south Asia, plans remain in their formative stages, Mattis said.

“We just rolled the strategy out,” Mattis said. “We need to sit down together and talk very openly and frankly about where we’re at today, where we’ve been and where we’re going to go.”

Mattis visited India before arriving in Kabul. During that trip, Indian Defense Minister Nirmala Sitharaman vowed to cooperate more with the Afghans but ruled out sending Indian troops to Afghanistan.

Many analysts have questioned whether seeking greater support in Afghanistan from India, Pakistan’s archrival, is a wise move. Pakistan is said to provide support and shelter to the Afghan Taliban and some fear India’s overtures could exacerbate the situation. Pakistan denies supporting the insurgents.

Earlier this month, Mattis said more than 3,000 additional U.S. troops were on their way to Afghanistan, as part of the new U.S. strategy. There are currently 11,000 there.

However, details of the plan are still unknown. President Donald Trump has said he does not want to discuss military tactics, timetables or troop numbers, a sentiment echoed by Mattis.

“I don’t want to tell the enemy exactly what we are doing, but the whole point is to make certain we have a compelling battlefield advantage over anything the Taliban tries to mass against [Afghan] forces,” Mattis said.

Stoltenberg said on Wednesday that more non-U.S. troops were also on their way to Afghanistan, adding to the current 5,000 personnel. He said 15 NATO members had agreed to send additional troops to help U.S. and Afghan forces prevent the country from becoming a haven for terrorists. “The more stable Afghanistan is, the more safe we will be,” Stoltenberg said.

The Wednesday airport attack highlighted the difficult security situation the United States and its allies face as the war enters its 16th year.

Since international forces ended combat operations at the end of 2014 and switched to a train, advise and assist role, security has worsened in Afghanistan. The Taliban are now said to claim more territory now than at any time since a U.S.-led invasion overthrew their regime in 2001.