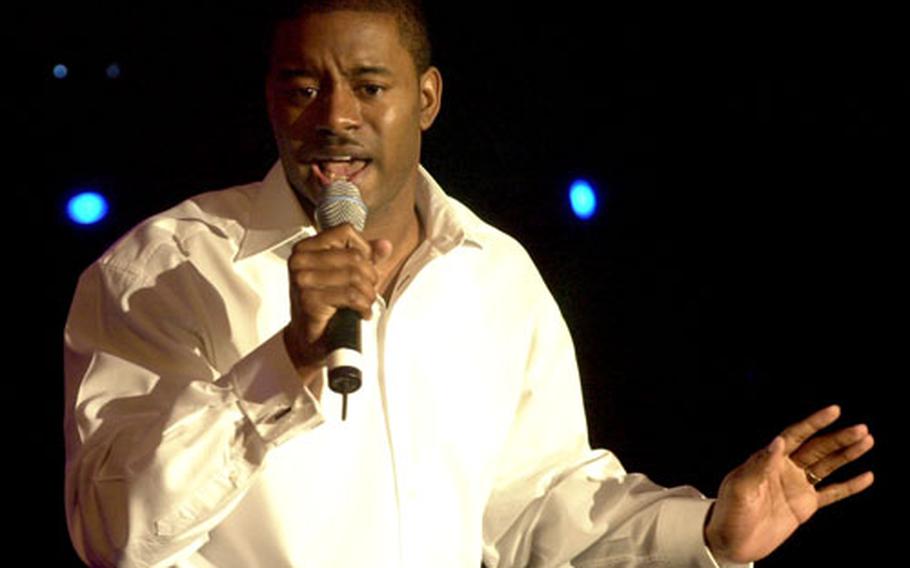 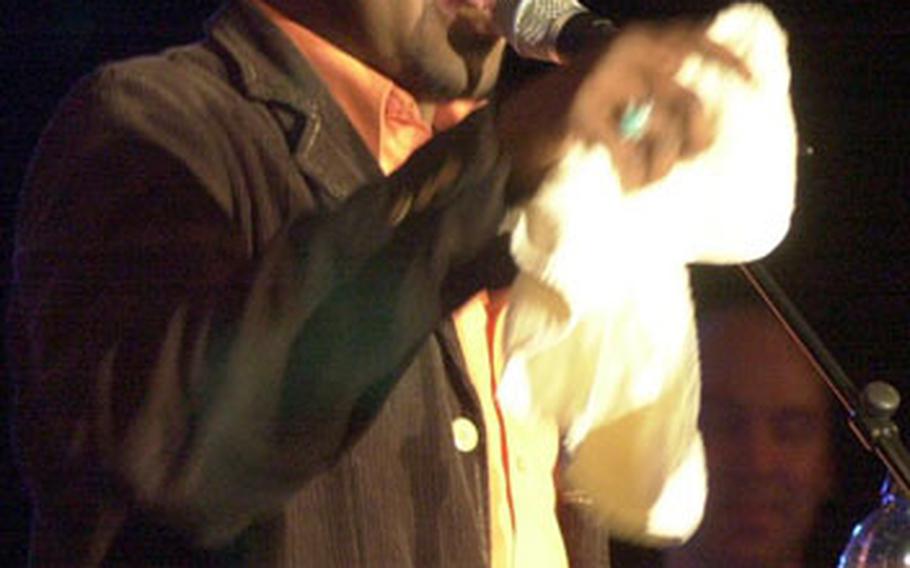 “American Idol” finalist and recording artist George Huff sings at the “USAFE Idol” singing competition Saturday evening at Ramstein Air Base, Germany. Huff was a judge during the competition, which included the Air Force’s top singers from across Europe. (Scott Schonauer / S&S)

RAMSTEIN AIR BASE, Germany &#8212; Friends nicknamed Senior Airman Tony Howard &#8220;Pretty&#8221; because he frequently likes to admire himself in the mirror.

On Saturday night, many audience members agreed he deserved a second look.

Howard, a security forces journeyman based at Volkel Air Base in the Netherlands, sang a rousing rendition of Stevie Wonder&#8217;s &#8220;Superstition&#8221; to win the second annual USAFE Idol competition at Ramstein Air Base.

Wearing a replica of Wonder&#8217;s trademark shades and mimicking the famous singer&#8217;s sway, Howard earned one of the loudest ovations from the several hundred people in the audience.

Although he exuded confidence on stage, the Georgia native looked shocked when he won.

The singing competition is loosely based on the hit TV show &#8220;American Idol.&#8221; Contestants, who are active-duty personnel stationed at bases spread across the continent, sang two songs of their choice with the Air Force&#8217;s pop music band Direct Hit providing the music. Judges decided the winner.

Howard beat out seven other contestants by capping off the night singing Ruben Studdard&#8217;s version of &#8220;Flying Without Wings.&#8221;

Staff Sgt. Michelle Miller, who is assigned to the 16th Air Force at Ramstein, finished second. The daughter of an accomplished piano and organ instructor said the competition was fierce.

Master Sgt. Douglas Gosselin, who is stationed at RAF Lakenheath, England, took third after giving one of the most energetic performances, singing John Michael Montgomery&#8217;s &#8220;Be My Baby Tonight.&#8221; At one point during the song, he caused a roar by whipping off his sports jacket, falling to his knees and pointing to the crowd.

George Huff, an &#8220;American Idol&#8221; finalist in season three, served as a judge and performed two songs before the contest&#8217;s second round. He also met with the contestants before the show.

Although the viewing audience was smaller and the stakes were less, Huff found that many of the airmen went through the same anxiety he had as a TV contestant. He offered advice he gained from his experience.

Howard said he learned a lot from his brief time with Huff.

Howard has been in the Air Force three years and plans to make it a career. But that doesn&#8217;t mean he has any intention of giving up singing and performing.

The former church choirboy, who is married and has a 1-year-old daughter, has thought about entering the &#8220;American Idol&#8221; competition but wants to hone his skills first.

As the 2006 USAFE Idol winner, Howard received two free airline tickets to any place in the continental United States courtesy of American Airlines.