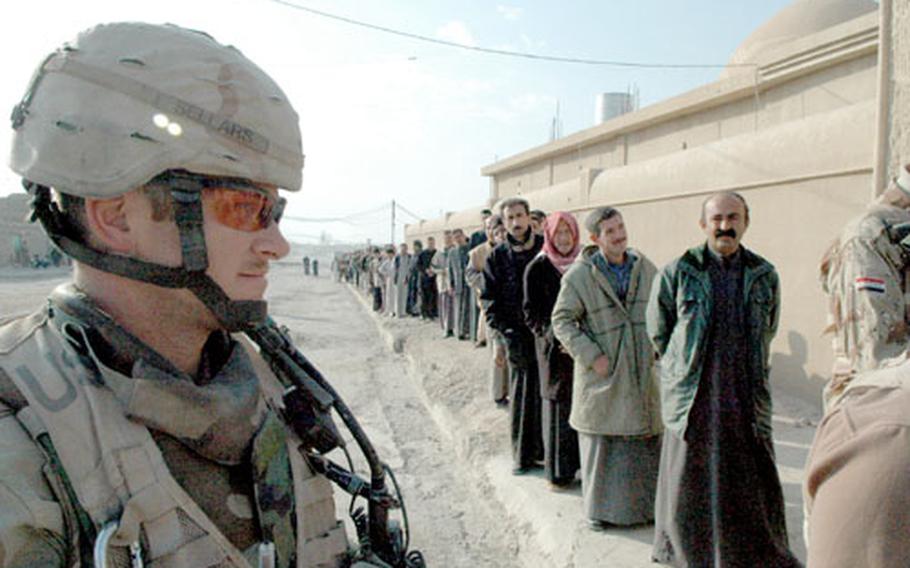 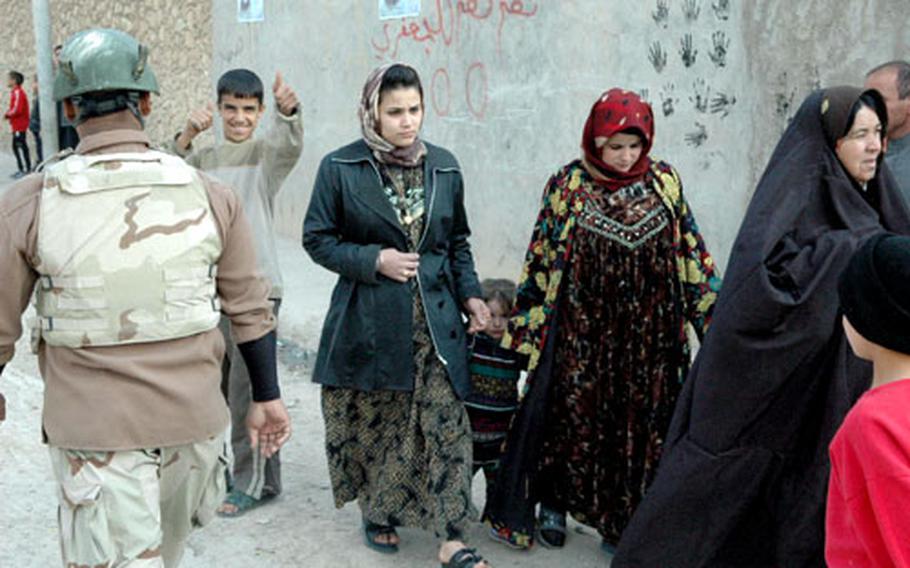 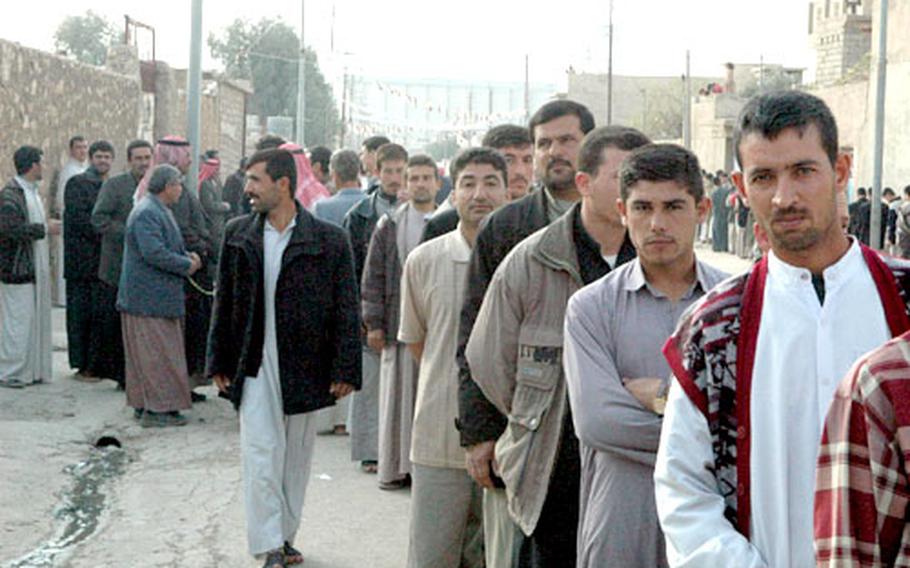 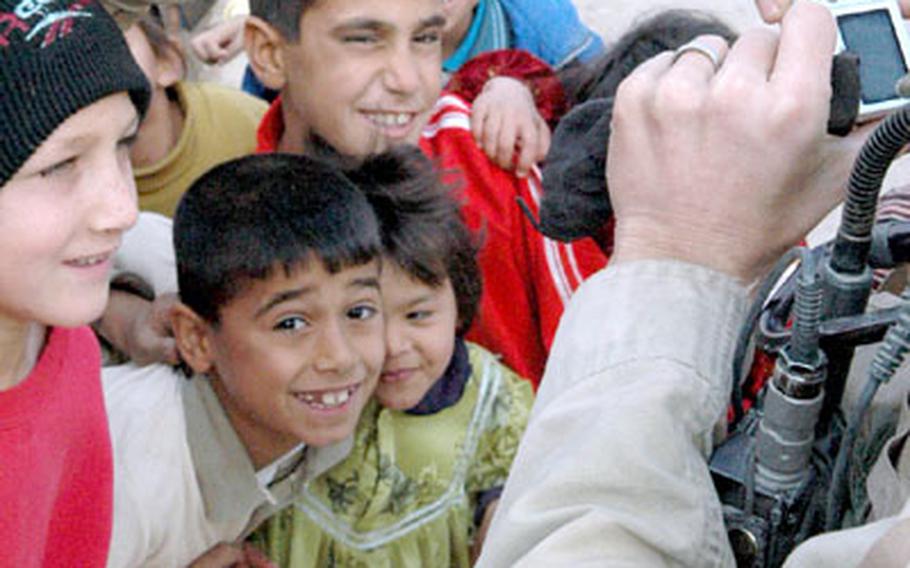 Iraqi children pose for a U.S. soldier taking a photograph outside a busy polling site in Tal Afar, Iraq, on Thursday. About an hour later, mortar shells landed near the same polling site, killing two children and injuring seven others. (Monte Morin / S&S) 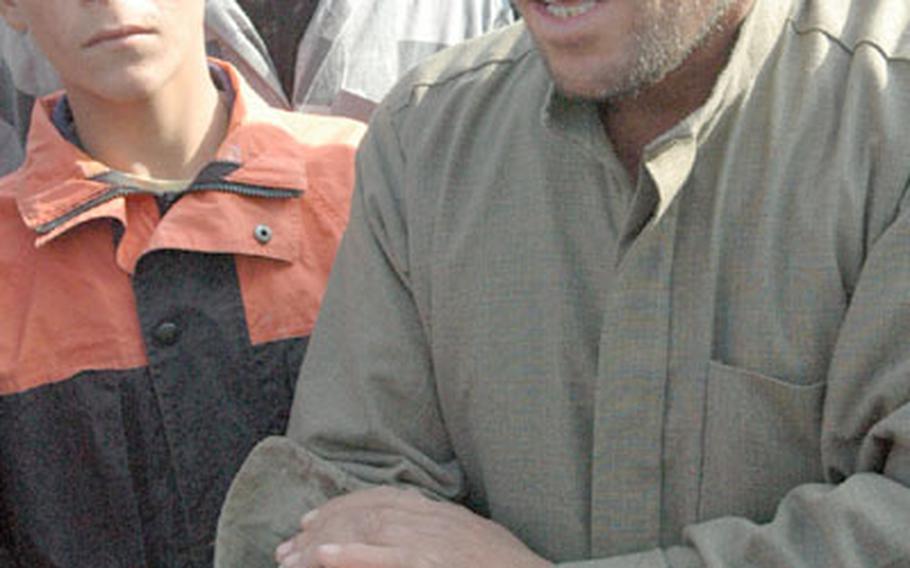 An Iraqi man holds a piece of mortar shrapnel he was struck by after he voted in Tal Afar on Thursday. (Monte Morin / S&S)

TAL AFAR, Iraq &#8212; Crowds of Iraqi voters, many of them women, poured into the streets of this ancient city and lined up to vote Thursday, despite sporadic mortar attacks that killed at least three people and injured eight.

Sellars, the commander of Fox Troop, Sabre Squadron, 3rd Armored Cavalry Regiment, spent much of the day speeding between polling sites in a clattering Bradley fighting vehicle. While U.S. forces sought to maintain a low profile, and were barred from entering polling sites, Abrams tanks took position at key intersections and a pair of Kiowa helicopters flew high above the city.

In nearby Mosul, authorities reported that insurgents had targeted polling sites with a bicycle bomb and another improvised explosive. No further details of the bombings were available by early afternoon.

The voter turnout in Tal Afar was so large, Sellars went back to his base to retrieve more hand-held metal detectors so that Iraqi security personnel could more quickly check the lines of voters.

The first hours of the election saw several sporadic mortar attacks in the city&#8217;s center and in Sellars&#8217; area of operations &#8212; known for its heavy Shiite population and a presumed target for attacks from Sunni insurgents.

Voters carried on with the task at hand, despite the explosions.

In the heavily Shiite Jolak neighborhood, campaign posters for the &#8220;555&#8221; slate of candidates covered houses and storefronts.

As Sellars stepped from his Bradley, a man with a bloody bandage around his arm showed the captain a chunk of shrapnel that had struck him after her voted. The chunk of steel shone gun-metal gray in his hand, while his index finger was dyed deep purple &#8212; a mark that he had already voted.

As Sellars spoke with the man through an interpreter, radioman and Pfc. David Roca, 22, of Queens, N.Y., informed Sellars that a white pickup was spotted driving through town, despite a citywide ban on all automotive traffic, including bicycles and donkey carts.

&#8220;Tell them to interdict it. Interdict it with their co-ax if they have to,&#8221; Sellars said, referring to the coaxial machine guns mounted on Bradleys and Abrams tanks.

Radio reports from other parts of the city Thursday morning showed both Sunni and Shiite Muslims were turning out in large numbers.

&#8220;We are so happy about this because nobody is telling us how to vote,&#8221; the owner of a small store told Sellars in the Al Mua&#8217;almen neighborhood. Sellars, 30, of Arkansas, was handing out metal detectors to Iraqi security personnel when a large crowd of children gathered around him chanting, &#8220;Mr. Jimmy! Mr. Jimmy!&#8221;

The scene was very different more than an hour later, when mortar shells landed among a crowd of children, killing three and injuring seven. Sellars&#8217; Bradley was to escort an ambulance containing the bodies and another containing the wounded to the city&#8217;s hospital.

Before they could leave for the medical center though, several distraught men descended on the ambulance containing the bodies and asked to look at them so they could inform neighborhood families about who had died. The men grew increasingly distraught as they opened the black body bags and pulled blankets aside to look at the casualties.

As more men began to gather, Sellars ordered the ambulance to close up and leave for the hospital.

On Wednesday, two mortar shells whistled into the southwest area of Tal Afar. One landed in the area of a polling station and caused minor injuries to three members of a family. The other struck just outside the perimeter wall of a U.S. and Iraqi army encampment at a granary known as The Silo. The explosion near the military site caused no injuries.

At a number of polling sites throughout Tal Afar, election officials and Iraqi army soldiers separated males and females into two lines for voting. Initially, U.S. soldiers advised against that arrangement, but eventually they relented.

&#8220;It&#8217;s their election and they want to do it this way so, there it is,&#8221; said Sgt. Brian Griggs, of Fox Troop, Sabre Squadron, 3rd Armored Cavalry Regiment. Iraqi army and police officers said they believed the most likely attack would come from a female suicide bomber.

For the most part, U.S. and Iraqi soldiers and police officers anticipated a quiet election, much like the October referendum. An uneventful voting day would bode well for Iraq&#8217;s future, they said.

Staff Sgt. Corey Tondre, of Sabre Squadron&#8217;s Eagle Troop, said the voting could have a profound affect on his future.