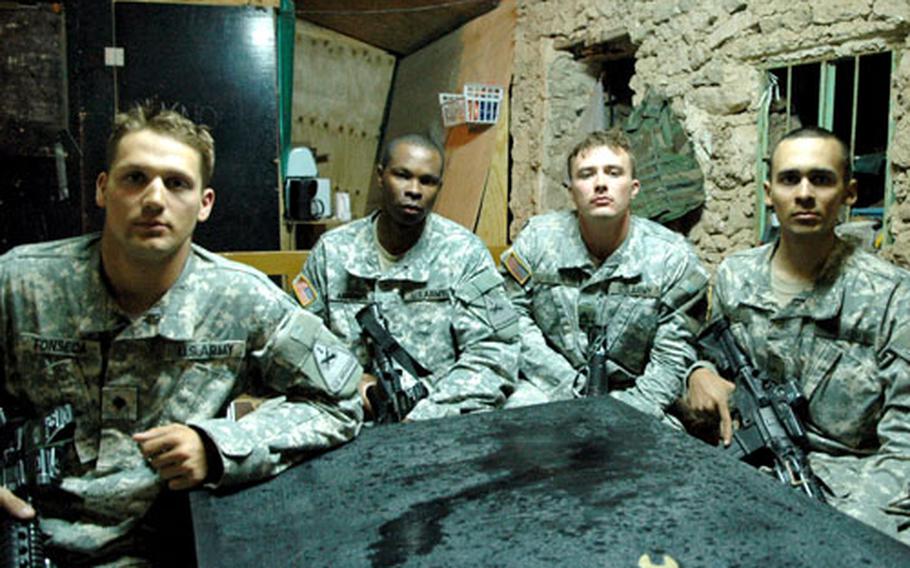 TAL AFAR, Iraq &#8212; Staff Sgt. Jeff Anderson had barely searched the room before he got a bad vibe.

The 24-year-old Montgomery, Ala., native tugged the poster off the wall. There was a ventlike opening behind it &#8212; the kind of place where insurgents stash weapons. He dragged the couch over to boost himself up and have a peek.

Amazingly, the blast did little more than deafen Anderson for a few seconds. Before the smoke cleared, Anderson&#8217;s squad from 2nd Platoon, Company B, 1st Battalion, 36th Infantry Regiment got their next surprise: A grenade dropped out of the hole, skittered across the floor and exploded.

As 1st Armored Division troops in Tal Afar pursue an aggressive strategy of house raids and random searches, soldiers have experienced only fleeting contact with the enemy. In most instances, insurgents have chosen to fire and flee, or used roadside bombs and booby traps.

But on Monday, Company B soldiers found themselves locked in a rare, five-hour showdown with a cornered gunman and suspected suicide bomber who had bunkered himself into the wall of a home. Soldiers used rifles, grenades, blocks of C-4 explosives and a remote-controlled robot on the insurgent, who &#8212; it seemed &#8212; simply refused to die.

The episode began around 9 a.m. when soldiers rolled out of Combat Outpost Burma and began a routine search of buildings. The platoon never got past the first houses they came to. As Anderson led his squad into a home, Sgt. Mikeal Auton, 23, of Lenoir, N.C., led his squad into an adjacent barn filled with sheep and heaping piles of hay. Auton&#8217;s soldiers found a plastic bag filled with a fertilizer explosive, as well as metal bolts and nuts &#8212; ready-made shrapnel. They found a second bomb and a suicide vest.

Anderson&#8217;s squad intensified their search of the house next door. After the couch detonated, they turned their focus on the man in the wall.

Soldiers tossed five fragmentation grenades and five flash bangs at the opening, and then blasted it with more than 1,100 rounds of 5.56 mm ammunition.

But he stayed hunkered down with a submachine gun and a Kalashnikov. An explosive ordnance disposal team was called in to settle the matter. They detonated two blocks of C-4, collapsing half the roof.

Then soldiers noticed a pile of trash on a second story ledge. Pvt. Victor Flores, 21, of Phoenix, Ariz., moved the trash and found another heavily fortified hole. McCusker figured someone had to go inside and confirm whether the insurgent was dead.

McCusker armed himself with a flashlight and a 9 mm pistol and squeezed himself into the opening. Instead of a dead body, he found the barrel of a gun.

&#8220;Bullets went right by my face, 10 or 12 rounds,&#8221; McCusker said. The rounds ricocheted off the walls of the hiding space, peppering his face with concrete. McCusker tumbled out the hole onto the ground, his face bleeding.

Lying on the ground, McCusker looked up at one of his men.

Auton and two others emptied a magazine each into the opening.

The insurgent, who was still clutching his submachine gun, did not see 2nd Platoon soldiers approaching him from behind. They fired roughly 10 to 20 rounds more at him.

The insurgent slumped and appeared to be dead, but now his cell phone was ringing. Fearing the hiding spot might be rigged with a bomb, and due to the severe damage to the building, McCusker&#8217;s men cleared the area. The EOD team sent in a remote control robot with a camera.

&#8220;They told us they could still see him breathing on the camera,&#8221; McCusker said. Worried the insurgent might still trigger an explosion or fire at them again, an engineer dispatched him with a final gunshot to the head.

A few hours later, as soldiers recounted the incident, McCusker said he would handle the situation differently in the future. While he wanted to prevent damage to surrounding buildings &#8212; something he managed to do &#8212; he said he wouldn&#8217;t worry about that in the future.