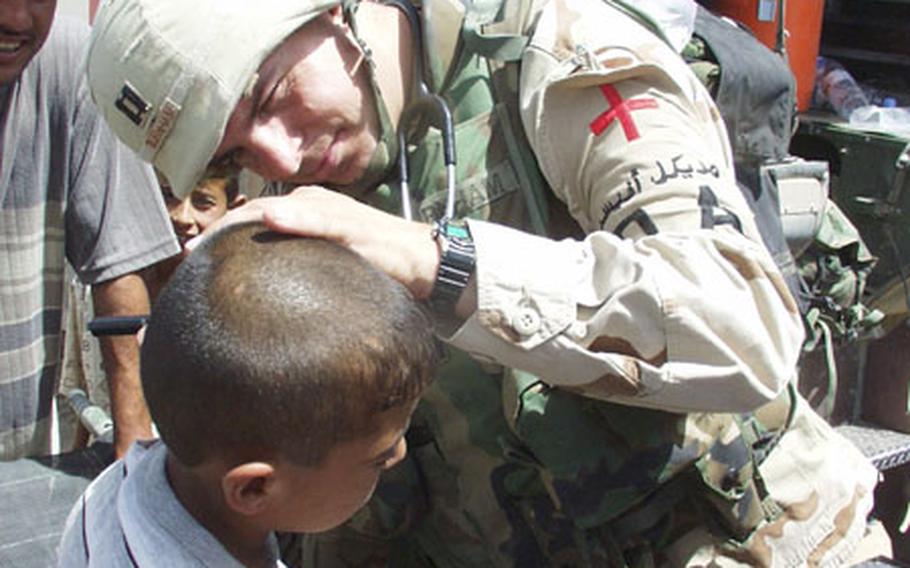 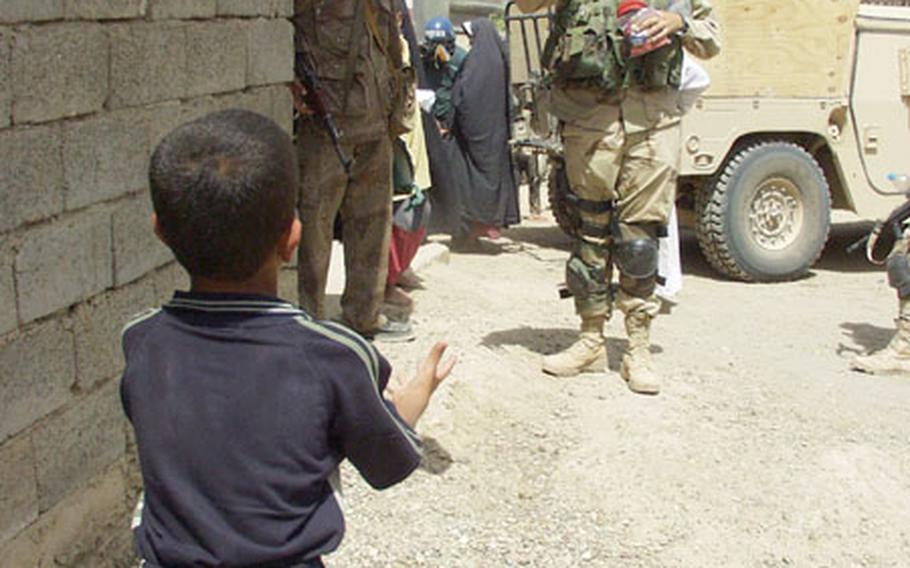 An Iraqi boy plays catch with 2nd Lt. Francis McCahill of Melbourne, Fla., a medical platoon leader with the 2-7 Cavalry Headquarters Headquarters Company during a trip to Mushada, Iraq, to provide medical checkups and medicine to residents. (Charlie Coon / S&S) 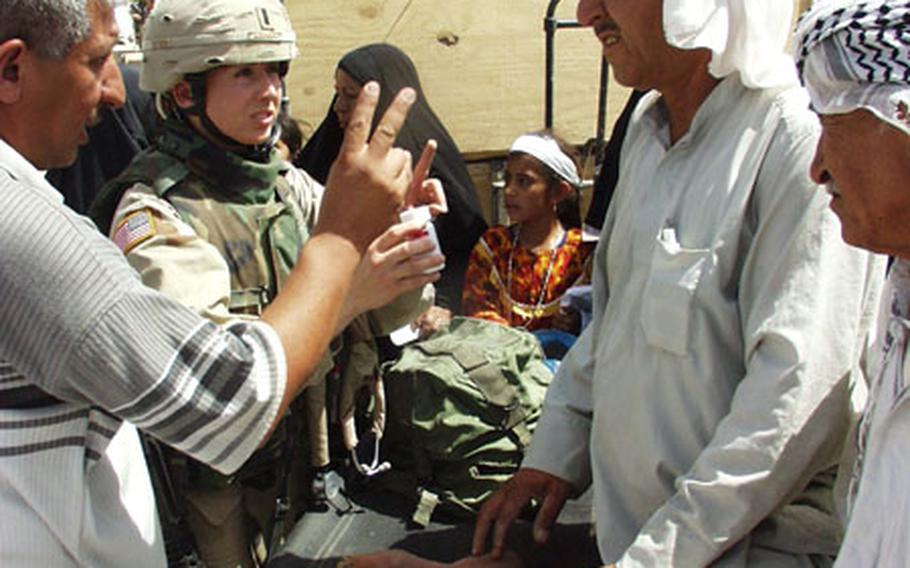 First Lt. Robin Lowery of Little Rock, Ark., a physician&#39;s assistant with Company, 39th Medical Group, tells a man through an interpreter about his medical treatment during a visit Saturday to Mushada, Iraq. Lowery was part of an Army convoy that made a goodwill trip to the small village located about 30 miles north of Baghdad. (Charlie Coon / S&S)

MUSHADA, Iraq &#8212; The convoy of trucks and armored Humvees kicked up dirt as it rumbled down the one-lane road into the village.

It turned out the residents of Mushada were thinking good thoughts. They&#8217;d been scouted and deemed coalition-friendly and worthy of a MEDCAP, or medical civil affairs project.

On Saturday, about 40 U.S. troops brought medicine to this dusty enclave off the beaten path, announced their presence using loudspeakers, then waited. Curious Iraqis peeked out their doors before trickling out to meet the troops in the dusty town square.

The soldiers hope word spreads to the less-friendly villages near Mushada, which is about 30 miles north of Baghdad. More MEDCAPs are planned as coalition troops try to make the transition from waging war in Iraq to rebuilding it.

War is still being waged, though. The 12-vehicle convoy that drove in from Camp Cooke carried more soldiers to pull security than to check patients. Upon arrival, some infantrymen took up positions with their M-16s on the perimeter of the village.

But the onslaught came from within.

Dozens of children swarmed the troops as they handed out the free goods. Women were personally invited by the loudspeakers to see &#8220;female doctors.&#8221; They lined up for help. Old men sought relief for their sore feet and arthritis.

The only people busier than the two physician&#8217;s assistants were the two translators as they hurried to translate symptoms and treatments.

On guard was a handful of troops from the Iraqi Civil Defense Corps, the Iraqi equivalent of the National Guard and Reserves in the United States. The troops wore desert camouflage just like the Americans, but some wore sneakers instead of boots and they joined the convoy in Toyota pickups instead of Humvees.

A few weren&#8217;t even old enough to shave. One U.S. soldier said the Iraqis likely weren&#8217;t packing very many bullets in their automatic weapons.

Villagers came to the American troops with complaints of sore knees and ankles and gastrointestinal discomfort. One boy had an ear infection. His father was given medicine for him and told through a translator how to use it.

Ryan said the villagers were given some Tylenol in addition to specific medicines for specific ailments. But it wasn&#8217;t a particularly sickly group.

The event soon took on a party atmosphere as soldiers taught the boys how to throw the footballs. Little girls posed for Polaroid snapshots, then giggled while looking at the pictures.

It was an easy place to forget about the war.

Saturday&#8217;s visitors were members of the 1st Cavalry Division&#8217;s 39th Brigade Combat Team, most of who arrived in Iraq within the past two months. Their jobs are to secure parts of Baghdad and the area north of the city.

The soldiers hoped the MEDCAP visit to the tiny village of fewer than 200 residents was a small but successful step toward peace.

&#8220;I hope we do more of them,&#8221; said Capt. Hugh Allyn of Montclair, N.J., an infantryman who has been working the local markets with interpreters trying to bridge the friendship gap.