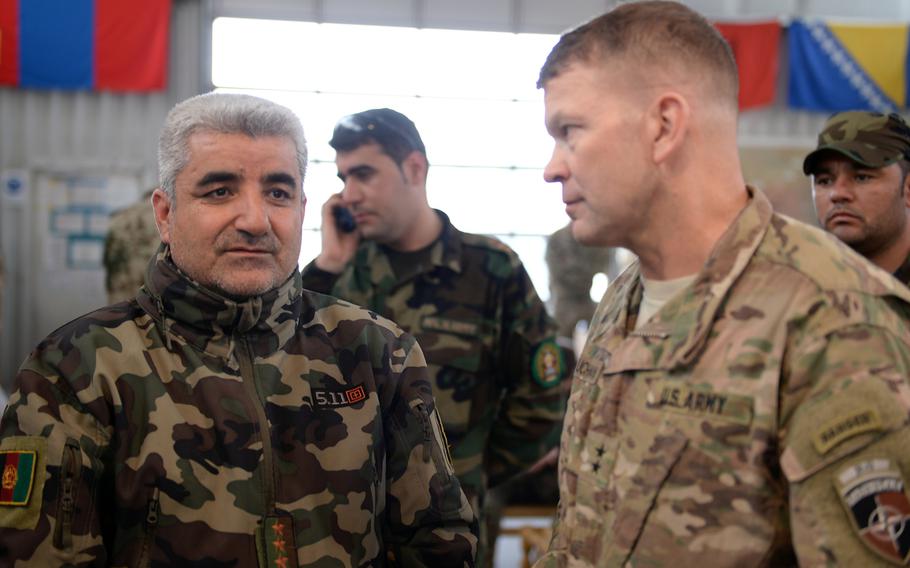 “We are pretty much changing everything — changing maneuvers, the shape of the operation and the directions,” Shaheem said through an interpreter.

Taliban insurgents attacked Afghanistan’s fifth-largest city in late September, catching government forces by surprise. Within hours, the Taliban were in control as security forces retreated to the airport and an army base south of the city. Residents said police disappeared without putting up a fight.

It took two weeks of street-to-street fighting and the help of U.S. special operations forces and air power for the Afghan forces to retake the city. Kunduz was the first major urban center to fall under Taliban control since they were ousted from power in the 2001 U.S. invasion.

U.S. military officials and analysts pointed to a lack of coordination among Afghan security forces and low morale as contributing to their failure to anticipate or stop the Taliban advance.

Shaheem chaired a meeting at Camp Pamir Monday of top military, police and intelligence officials from the region.

Although Shaheem did not elaborate on the precise changes in tactics, they appear to involve more pro-active measures by the government forces. NATO officers in Kabul have complained privately that Afghan commanders had demonstrated a lack of self-confidence in operations after NATO’s ground troops were pulled out 15 months ago, reacting to Taliban attacks rather than initiating them and so keeping the guerrillas off-balance.

“You can see a lot of good coordination that is going on right now,” Shaheem said. “We’re here to bolster this coordination between all friendly forces.”

“They have a lot of capability, but it’s a matter of integrating it,” Buchanan said. “They have infantry, they have air power, they have artillery. If you use them just one at a time, it’s not very effective. But when they bring all three together at once, it could have a very powerful effect.”

The battle for Kunduz also underscored the challenges of urban warfare. Shaheem said one of the goals was to rebuild trust with civilians who were caught in crossfire and felt abandoned by security forces.

“A lot of people are still ... disturbed that Kunduz was overrun,” Shaheem said. “We’re trying right now to build this trust to make the people sure the government is stable.”

Some at the meeting complained they are still short of manpower, ammunition and equipment.

Speaking on the sidelines of the meeting, Lt. Col. Fazel Azim Hairat, the Afghan army’s assistant operations officer, said the military would need extra help to fight the Taliban in Kunduz and its surrounding areas.

The international military coalition ended its combat role in Afghanistan at the end of 2014 and now the U.S. only provides air support under specific conditions, such as when its troops are endangered or if the attack is considered a terrorist threat. Resolute Support officials had no immediate comment on whether they would provide air support in the event of another attack on Kunduz.

During last year’s battle with the Taliban in the city, U.S. aircraft called in for airstrikes hit a Doctors Without Borders hospital, killing 42 people, including hospital staff and patients. A U.S. investigation attributed the attack to “human error.”

The recently departed head of the international coalition, Gen. John Campbell, said after the Kunduz attacks that Afghan forces needed to make better decisions about when to go on the offensive and when to defend.

Buchanan said he spoke privately with officials in Kunduz about increasing offensive maneuvers.

Shaheem said recent operations by Afghan forces that started in Baghlan province south of Kunduz province were successful at keeping insurgents at bay. But momentum stalled in Kunduz province, where insurgents still control much of the territory around the city of Kunduz. The shift in tactics is meant to reestablish momentum, he said.

“Overall the situation is under control, and we’re hoping we are not going to experience the same thing we experienced last year,” Shaheem said. “But we have to be very cautious about that. Kunduz is still one of our top priorities.”