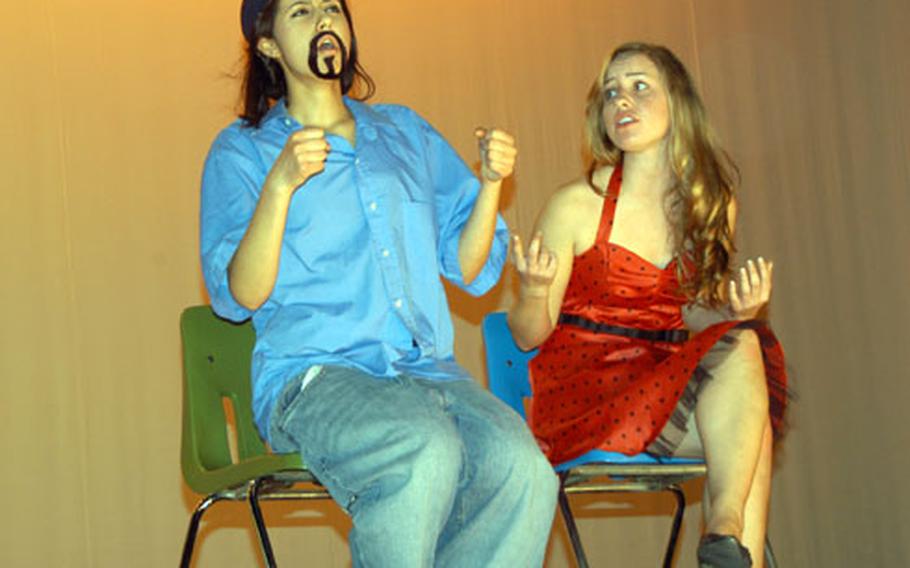 CAMP FOSTER, Okinawa &#8212; For Zama American High School senior Emily Ashby, acting on stage in front of her peers Tuesday gave her a different kind of rush than performing in drama class.

Ashby, 17, and classmate Elsa Moreck, 17, also a senior, had just received rousing applause for their reading of "Lost in Transmission," adapted from a humor column by Dave Barry. And Ashby was taking it all in.

"You can hear people laugh at all the right parts," she said. "You&#8217;re looking out and you see all the smiling faces and all the encouragement."

The enthusiasm and energy were evident Tuesday inside the hallways of Kubasaki High School, where theater students from around the Pacific had converged for the annual Far East Drama Festival, which runs through Friday.

Students were dancing the tango, acting in front of the video camera and designing costumes.

"It&#8217;s like being in drama class all day. You just feel the excitement," said Joy Graham, 17, a junior from Daegu American School in South Korea.

The five-day festival drew more than 100 theater students from 11 Defense Department high schools in Japan, Okinawa, South Korea and Guam for a series of workshops and stage performances.

"The festival takes them outside their comfort zone in a very challenging, positive and empowering way," said Bales. "It&#8217;s an opportunity for them to see themselves through many other eyes throughout the week."

The festival can be particularly inspiring to students from smaller high schools, where theater is limited.

"We don&#8217;t have an actual drama room," Moreck said of her school on Camp Zama near Tokyo. "Here you can perform in front of a bigger audience and on a nice stage."

Alphonso Mills, 17, a senior at Seoul American High School in South Korea, said participating in theater helped him overcome shyness as a youngster. He&#8217;s hoping the workshops will help improve his stage presence.

Britta Jensen, a drama teacher at Daegu American, said students walk away from the festival a little more confident and a little more ready to show off their skills.

"It&#8217;s a chance for them to really be themselves and hone skills that on the home front they may not be able to show off or feel comfortable," she said. "For some of them, it may be the only time they may get that recognition."