'Take a Soldier to the Movies' brings films, snacks to deployed troops 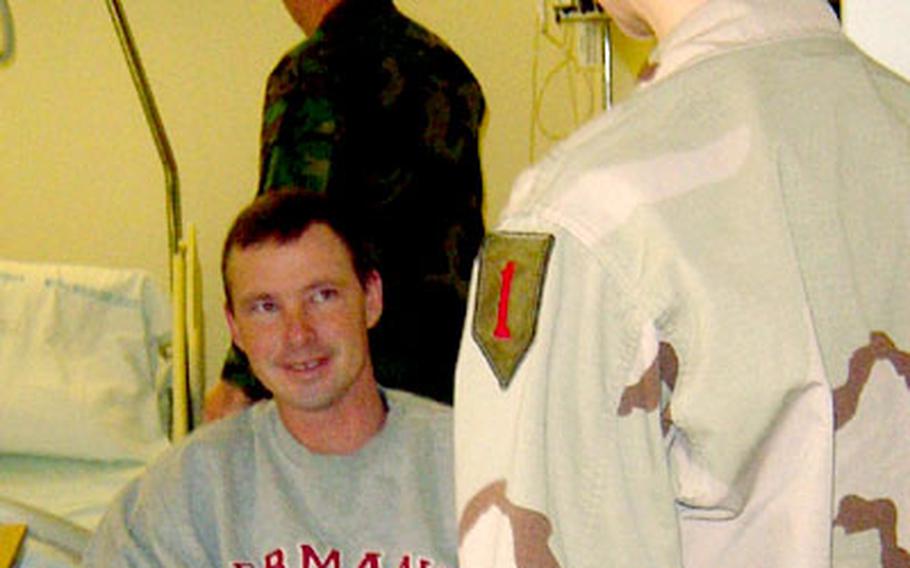 Bernard Hintzke and his wife Kathy long ago started a tradition of taking their four sons to the movies on Thanksgiving.

With his youngest son, Spc. Adam Hintzke, deployed to Iraq with the 601st Aviation Support Battalion, the father decided that this year he would send the movie to Adam to keep the Thanksgiving tradition alive.

That simple plan has grown into putting movies into the hands of troops from about 10 Army and Marine units downrange.

With Operation: Take a Soldier to the Movies, Bernard Hintzke and his support team have sent more than 1,600 movies to soldiers and Marines deployed to Iraq.

&#8220;To date, we have been able to put together movie packages for every unit that has contacted us and asked to be included in the project,&#8221; Hintzke wrote in an e-mail. &#8220;The number of movie packages sent to the troops to date is 1,680. A little idea that started with our son who is in Iraq has grown to this. We now have someone representing Operation: Take a Soldier to the Movies at Fort Hood, Texas.&#8221;

He and his team of volunteers in West Allis, Wis., turned to members of their community for donations of movies and snacks.

&#8220;We had hoped that the people in our area would like to help again like they did for the [1st Infantry Division] Christmas in July project, by sending a movie package to the troops on Thanksgiving Day as a way of saying &#8216;thank you for your service to our country,&#8217;&#8221; Bernard Hintzke wrote.

But Kathy Hintzke&#8217;s cousin, who works in a public relations firm, created the organization&#8217;s Web site (www.soldiertomovies.org) and sent a press release to national media sources.

The organization now gets donations from people and schools all over the United States, the father wrote.

He collects movies, snacks and the popcorn boxes in which they are distributed, and sends them to the 601st Aviation Support Battalion rear detachment, based in Katterbach, Germany, according to Capt. Mellanie Merrit, rear detachment commander.

Other donations come directly from people who have visited the Web site.

Lindenmeyer and volunteers from the Katterbach community assemble the popcorn boxes and pack them with movies and snacks to send downrange.

Merrit and others from the Family Readiness Group also delivered movie packages to injured troops at Victory Ward at W&#252;rzburg hospital. Some packages also went to wounded troops at Landstuhl Regional Medical Center.

Some of the donors send movies and snacks for the packages, but nearly all send letters accompanying their donation, Merrit said.

&#8220;These are really high-quality, top-notch movies that people are sending,&#8221; Merrit said. &#8220;But the coolest piece of it all is the letters that people send to the soldiers. We have to go through all of this and package everything, and we read the letters from people thanking the soldiers for their service to our country, and it really tugs at the heartstrings.&#8221;

And the soldiers appreciate the support.

&#8220;My husband [Maj. Victor Lindenmeyer, commander, Company A, 601st ASB] called me on Thanksgiving and said this was the highest boost in morale all year,&#8221; Lindenmeyer said. &#8220;He&#8217;s a very tough guy, and there was so much emotion in his voice. The guys all missed home, it was Thanksgiving.

&#8220;This wasn&#8217;t just 10 guys getting a package; everyone in the company got one. Some of the guys were upset because there was no return address to write a letter of thanks, but they appreciated the support &#8212; like somebody on 4 Apple Lane thought about you today.&#8221;

Items to donate: new or used DVD movies, microwave popcorn, packets of pre-sweetened drink mix and assortments of movie theater-style candy. A letter or photo can also be included.

Operation: Take a Soldier to the Movies