Tainted gas found at some AAFES stations in U.K. 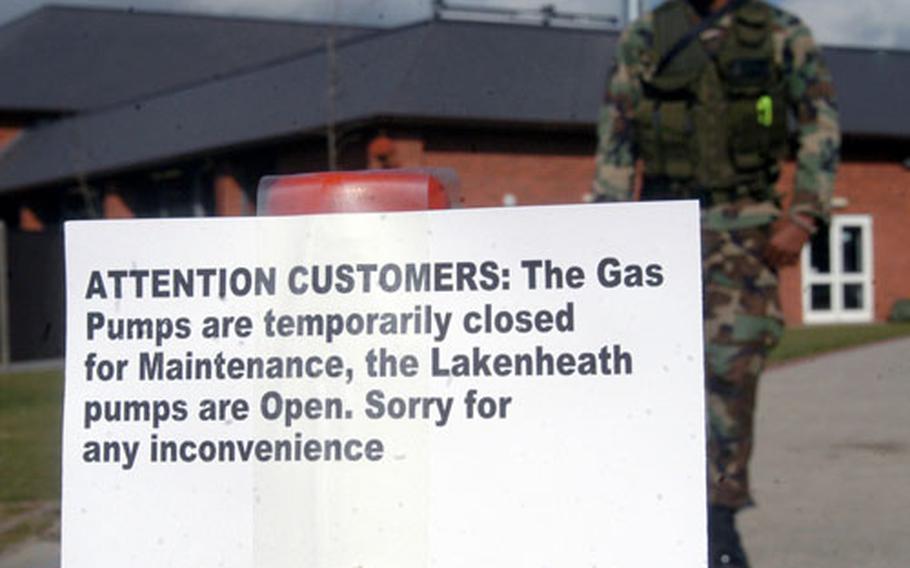 A security forces partrolman stands guard behind a traffic cone with a warning sign on it telling customers that RAF Mildenhall&#39;s gas station is closed. (Sean Kimmons / S&S)

A security forces partrolman stands guard behind a traffic cone with a warning sign on it telling customers that RAF Mildenhall&#39;s gas station is closed. (Sean Kimmons / S&S) 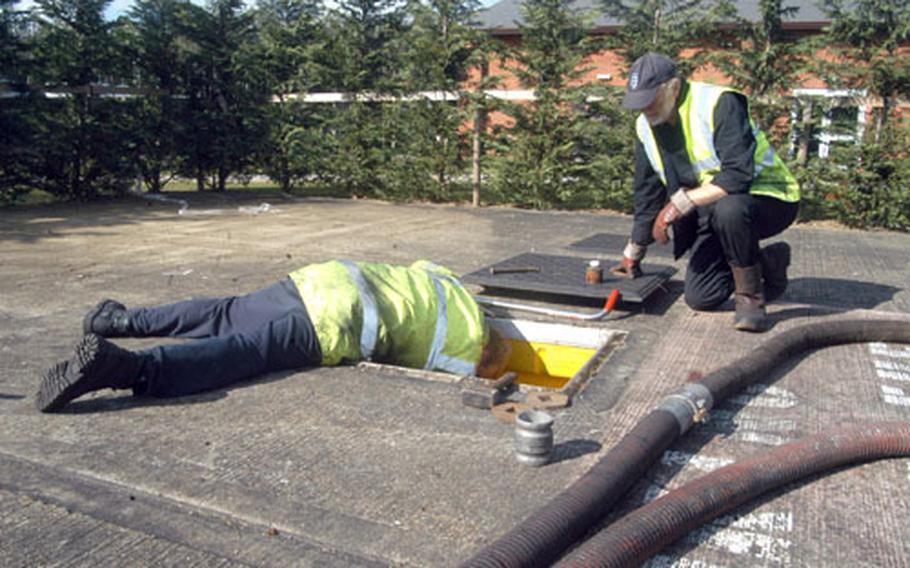 Bob Terry watches Cliff Kingham as he locks up a fuel storage tank after they removed about 32,500 liters of fuel from RAF Mildenhall&#39;s gas station following tests that showed that its fuel was contaminated. Both are from the Bob Terry haulage company. (Sean Kimmons / S&S)

The stations were closed part of the day Thursday.

Silicone adversely affects a car&#8217;s oxygen sensor, causing the &#8220;check engine&#8221; light to engage, and can lead to complete engine shutdown in some makes and models.

Byerly said customers who believe they bought the fouled fuel should file a claim with a base legal office to pursue compensation and that the British energy firm that supplied the tainted fuel will subsidize car repairs. A 100th Legal Office representative said that customers will need a receipt, two estimates of repair costs, as well as a copy of their U.K. registration in order to file a claim.

A Harvest Energy spokesman, however, said Thursday that the company is not commenting on any compensation matters.

Silicone is used by gas companies as an anti-foaming agent in diesel gasoline, but can cause severe problems to regular gasoline engines, according to the British Trading Standards Institute, which conducted the probe into the tainted fuel.

It&#8217;s unclear when the tainted gas was delivered to both bases, she said.

The amount of silicone found in gas at Mildenhall was significantly lower than that at RAF Alconbury because the Mildenhall tanks had since been refilled with clean gas due to customer demand at that station.

The pumps had to be closed during the emptying process.

Gas tested negative for silicone at RAF Lakenheath &#8212; the only other U.S. military base in the U.K. that receives gas from Harvest, Byerly said. The company also had supplied silicone-tainted gas to two major United Kingdom gas station firms.

Harvest Energy is one of two British gasoline suppliers that have been connected to the contaminated fuel, which has plagued scores of British motorists for the past two weeks across the south and east of England.

Harvest supplied the tainted fuel, which a British investigation has traced to an Essex fuel depot, to the grocery store chain, Morrisons, as well as Asda, the British arm of Wal-Mart, according to Harvest spokesman Chris Brown.

Vehicles can be equipped with up to four oxygen sensors and repairs can range from $300 to $1,000 in a worst-case scenario, Pidgeon said.

Stars and Stripes reporter Sean Kimmons contributed to this story.