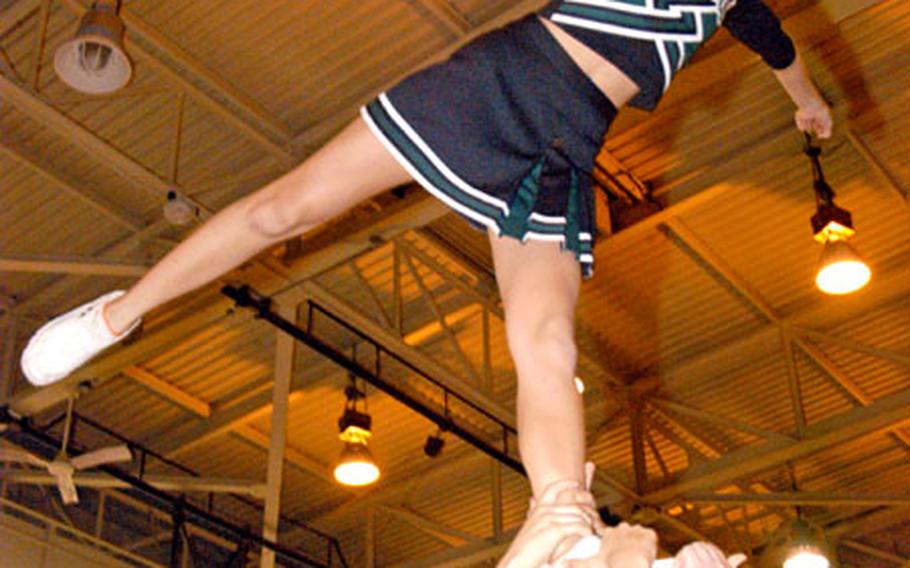 Aimee Hildenbrand, a sophomore at Taegu American School in South Korea, reaches for the rafters as the school’s Warriors Varsity Cheerleaders Squad demonstrates one of its stunts. The team took second place in the small school co-ed division at the National Cheerleading Association U.S. Championships in Daytona Beach, Fla., on April 10. (Galen Putnam / U.S. Army)

But with that finish and previous victories to their credit, the Warriors squad will spend the next year aiming for first place in the nationals, said co-coach Army Pvt. Julian Saaiman, an administration clerk with the 19th Theater Support Command at Camp Henry in Taegu.

But the drive toward first place at Daytona Beach next year will mean some key changes in how the squad trains, Saaiman said.

But Saaiman and co-coach Heather Robinson will take the squad through weeks of varied exercises: swimming, tumbling, stunting, weightlifting and more.

&#8220;The practices themselves are going to be a lot more rigorous, a lot more physical, a lot more focused, with competition in mind as our motivation, as well as having fun.&#8221;

And honing performance movements will get special focus.

&#8220;We really need to work on full body performance, all moves and all motions need to be exaggerated to give the full effect, as well as the cleanness and the sharpness of the motions,&#8221; said Saaiman.