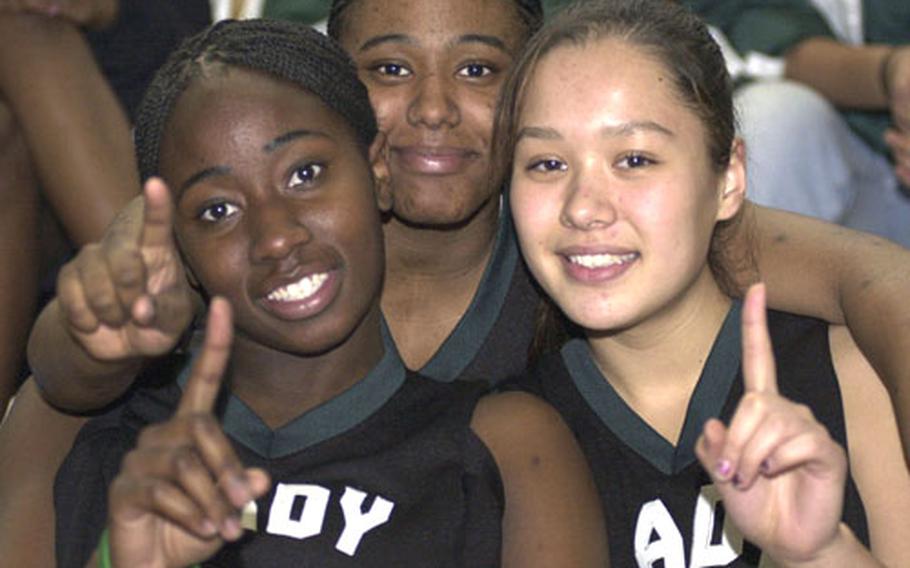 Lynette Grant, left, was killed Friday in an automobile accident near Jacksonville, Ala., where she was a freshman at Jacksonville State. She is pictured above as a high school senior with fellow Taegu American athletes Tamara “Tank” Hancock and Kelli Cox. (Dave Ornauer / S&S)

Three days after the death of sports hero and alumna Lynnette Grant, Taegu American School took on an air of subdued sadness as classes resumed Monday.

He spoke four days after three-sport star Grant, who graduated in June, died in a car wreck during a heavy rainstorm Friday afternoon in Alexander City, Ala. Grant was just starting her freshman year at Jacksonville State University and was traveling to visit her sister in Montgomery when she was killed.

As classes resumed, Speer said, students and school staff spoke about her contributions to the school and community and how suddenly her life ended.

Grant was the kind of person whom everybody liked, Speer and one of Grant&#8217;s former classmates said. She didn&#8217;t let the success of her Far East Class A volleyball and basketball MVP awards go to her head; she was all about team and its successes, they said.

&#8220;She was MVP of every sport she was in. She was smart. She was pretty. Everybody looked up to her,&#8221; said senior Jesse Covan, who was a Warriors softball teammate. &#8220;She was such a strong person. She had everything going for her. Nobody would expect something like that to happen to her.&#8221;

While the mood Monday and Tuesday was subdued, emotions were visible throughout the community when news of Grant&#8217;s death came Saturday.

&#8220;That was the worst,&#8221; Speer said, noting that the news came out just before the Warriors volleyball teams were to play Saturday morning. &#8220;A lot of her friends were on the team. That was extremely emotional. Needless to say, they weren&#8217;t really into the game.&#8221;