Tactical Unmanned Aerial Vehicle takes and relays images from 6,000 feet in the air 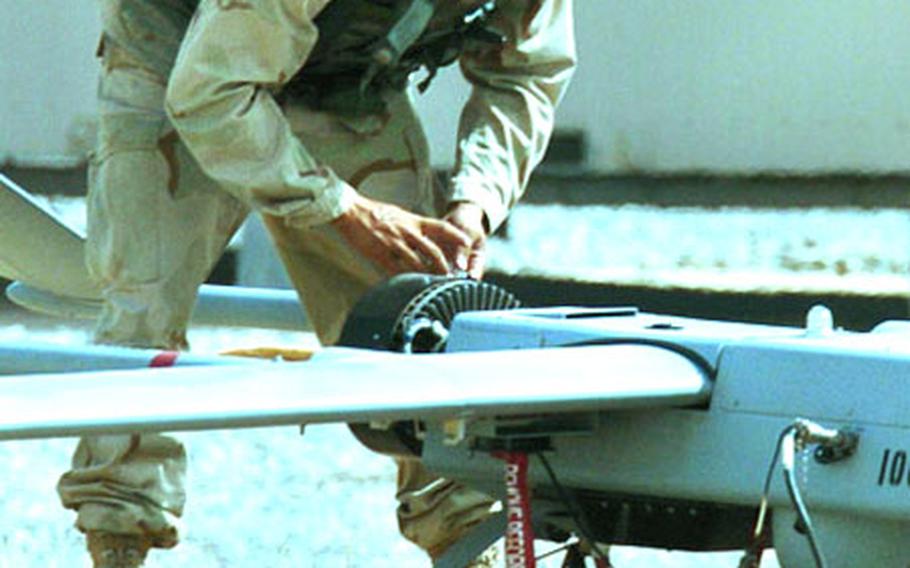 A soldier from the Tactical Unmanned Aerial Vehicle Platoon, 101st Military Intelligence Battalion, oils the propeller of the TUAV during pre-flight inspections at Forward Operating Base Remagen, Iraq, on May 10. (Courtesy of U.S. Army)

A soldier from the Tactical Unmanned Aerial Vehicle Platoon, 101st Military Intelligence Battalion, oils the propeller of the TUAV during pre-flight inspections at Forward Operating Base Remagen, Iraq, on May 10. (Courtesy of U.S. Army) 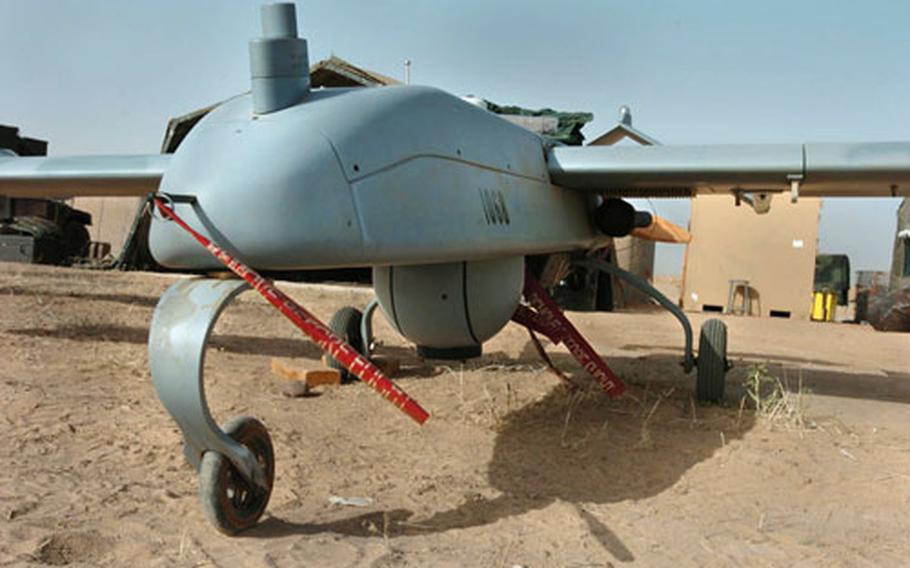 One of four new Tactical Unmanned Aerial Vehicles acquired by the 1st Infantry Division stands ready for a test flight at Forward Operating Base Remagen, Iraq on May 10. The design and color conceals the vehicle during flight. (Courtesy of U.S. Army) 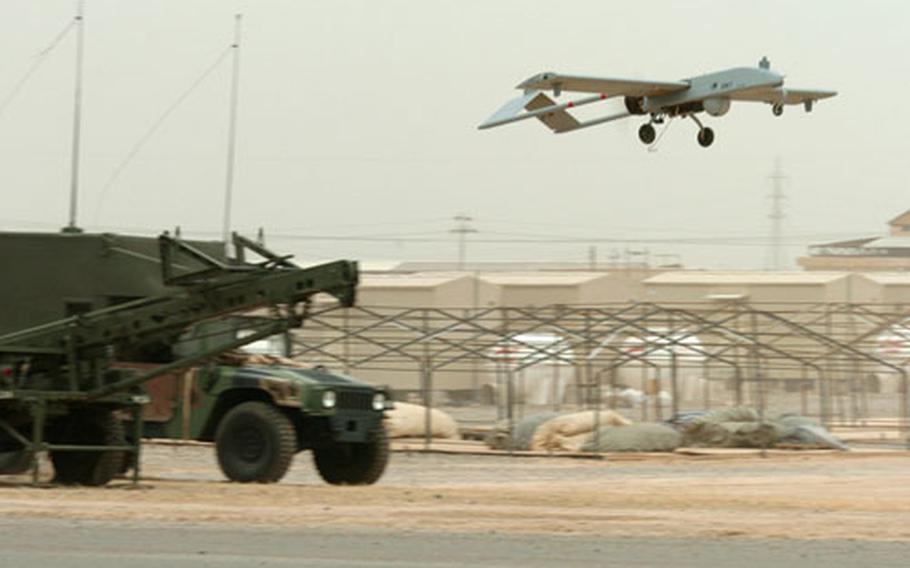 The 1st Infantry Division’s Tactical Unmanned Aerial Vehicle takes flight during a test run at Forward Operating Base Remagen, Iraq, on May 10. The vehicle is launched from a hydraulic rail launcher. (Courtesy of U.S. Army)

The 1st Infantry Division has its own eye in the sky.

Day and night, the division&#8217;s 101st Military Intelligence Battalion is flying its new Shadow 200 Tactical Unmanned Aerial Vehicles &#8212; an 11-foot pilotless aircraft that can watch the ground in daylight or darkness from 6,000 feet in the air, then relay the pictures to its operators.

In Iraq, Hall said, it has been especially useful because it can spy guerrillas setting up mortars or rigging roadside bombs.

&#8220;We can help find the enemy before they even launch an attack,&#8221; Sgt. Robert Peterson, a TUAV platoon sergeant and mission commander, stated in an e-mail from Iraq.

Each system comes with four 300-pound aircraft and two ground-control stations. Soldiers can control the aircraft up to 40 miles away. It can stay in the air up to five hours.

The Shadow 200 is a newer and smaller version of the bigger and better-known Ranger UAV, which has been widely used in Afghanistan and Iraq.

Their surveillance capabilities are similar, Hall said. The Ranger can fly farther and longer. But the Shadow 200 doesn&#8217;t need a runway to take off.

And it belongs to the division.

The first Shadow 200s entered service in October 2002, and the Army has hurried to get them into the hands of units deploying to Iraq. Hall said the 4th Infantry, 82nd Airborne and 101st Airborne divisions all have used them.

The Mosul-based Stryker Brigade is flying them as well.

Two platoons of soldiers trained as TUAV operators arrived at 1st ID headquarters in Tikrit on May 1, straight from eight months of training at Fort Huachuca, Ariz., home of the U.S. Army Intelligence Center and School. The 101st MI tested its new vehicles May 10, Hall said, and launched them on their first mission two days later.

Most of the soldiers flying the TUAVs are on their first duty assignment.

&#8220;The hardest part of the job is just keeping up with all the requests for UAV coverage that we get,&#8221; Peterson said.

Military intelligence battalions are used to operating in the shadows. But 1st ID is more than happy to tout the Shadow 200 and its capabilities.

Second Lt. Raven Bukowski, 23, of Akron, Ohio, a TUAV platoon leader and 2003 graduate of the U.S. Military Academy, doesn&#8217;t mind stepping out of the shadows.