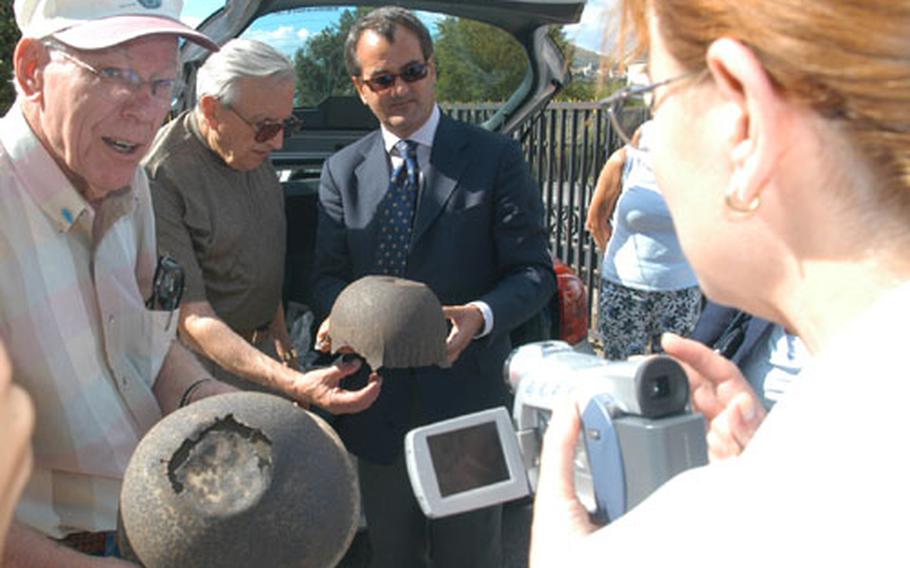 Former 36th Infantry Division soldier J.W. Hawkins, left, holds an American soldier&#39;s helmet found near San Pietro Infine by Fabrizio Carloni, center right, who holds a helmet liner. Looking at the liner is another former division member, Joseph Heiser. Carloni has written a book on the 1943 battle of San Pietro Infine, which Hawkins and Heiser took part in. In the foreground with the video camera is Hawkins&#39; daughter, Janet. (Jason Chudy / S&S)

Former 36th Infantry Division soldier J.W. Hawkins, left, holds an American soldier&#39;s helmet found near San Pietro Infine by Fabrizio Carloni, center right, who holds a helmet liner. Looking at the liner is another former division member, Joseph Heiser. Carloni has written a book on the 1943 battle of San Pietro Infine, which Hawkins and Heiser took part in. In the foreground with the video camera is Hawkins&#39; daughter, Janet. (Jason Chudy / S&S) 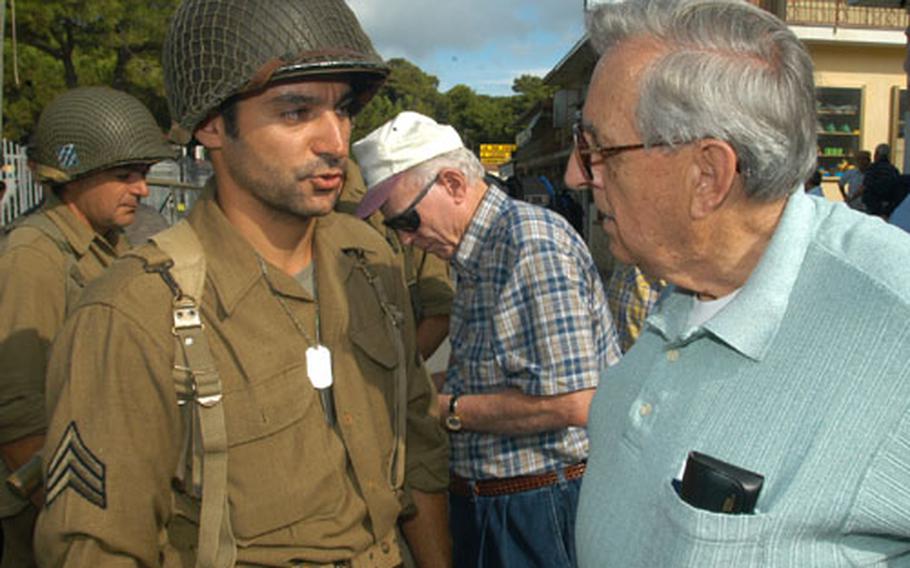 Joseph Heiser, right, chats with an Italian re-enactor on the 60th anniversary of Heiser&#39;s landing at Paestum, Italy, on Sept. 9, 1943, with the 36th Infantry Division&#39;s 141st Regiment during World War II. In the background at center is J.W. Hawkins, who also made the landing with the division. (Jason Chudy / S&S) 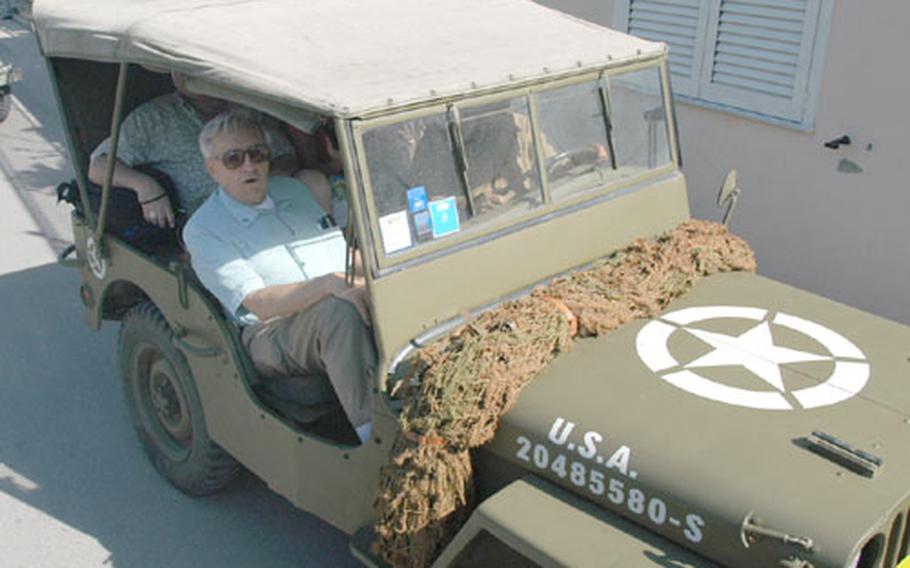 Veteran Joseph Heiser rides in an Italian re-enactor&#39;s jeep through the city of Paestum, Italy, on Tuesday. The Italians have chosen the 36th Infantry Division, of which Heiser was a member during World War II, to model their uniforms and equipment on. (Jason Chudy / S&S) 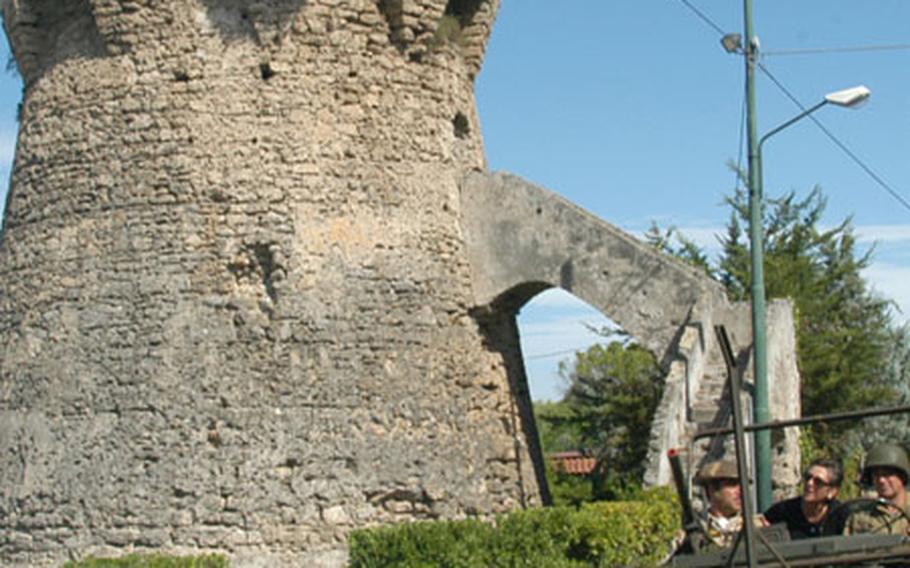 A renovated World War II jeep drives by a Roman tower that was used by German troops as a machine-gun nest during World War II in the Bay of Salerno landings at the town of Paestum, Italy. World War II veteran Joseph Heiser, an infantryman with G Company of the 141st Regiment, 36th Infantry Division, remembered seeing yellow German tracers coming from the tower toward him as he landed in the second wave of the invasion on Sept. 9, 1943. (Jason Chudy / S&S)

SAN PIETRO INFINE, Italy &#8212; Joseph Heiser stood among the destroyed buildings in the small hillside town of San Pietro Infine and looked south across the narrow valley, trying to regain his bearings.

He pointed to the conical-shaped Monte Rotondo a mile or so away. That, he said, was where he was wounded on Dec. 6, 1943.

For the veterans, it is a trip of remembrance and healing. For the family members, it is about education and understanding.

&#8220;When you travel and retrace the battle sites where these veterans fought, it becomes very emotional,&#8221; said 36th Infantry Division Association member Patti Stickle. &#8220;We talk about the war &#8230; and it just becomes so emotional you just start crying. All of us have spent hours crying.&#8221;

Stickle&#8217;s father, Tech. Sgt. William G. Wiley, was an infantryman in the division.

Hawkins told how one night he chose to dig a foxhole instead of taking an existing one. The next morning he learned that a soldier in that foxhole was later killed by a direct hit. He told how a shell landed a few feet away, killing one officer and wounding another but leaving Hawkins unhurt.

Many of the stories from his two years with the division didn&#8217;t come without a few quiet pauses to wipe away tears.

Hawkins also talks about how he lost two jeeps during the war, neither in combat. One was stolen while he visited a Naples bar.

Heiser&#8217;s stories share similar place names, but different battle details. Neither knew each other during the war. Hawkins was an engineer with the division&#8217;s 111th Engineering Combat Battalion, while Heiser was an infantryman with G Company of the 141st Regiment.

Heiser spent five months fighting with the division, arriving on the beach at Paestum in the second wave on Sept. 9, 1943. After being pulled out of action to regroup and reorganize after the landings, Heiser and the 36th rejoined the line on Monte Rotondo in November 1943.

Their position was so far forward that they couldn&#8217;t leave their foxholes during daylight without drawing fire. The mountains to either side were still in German hands.

Within two weeks, Heiser was wounded. Within two months, his war would be over.

On Jan. 20, 1944, two of the division&#8217;s three regiments attempted to cross the Rapido River under heavy fire from the Germans, who had strengthened the far bank as part of their Gustav defensive line. Mines killed men before they reached the river. Though less than 30 feet wide, a strong current overturned boats before they could get across, drowning some heavily packed soldiers.

The few bridges erected across the river were eventually destroyed.

Somehow, on the 21st, Heiser made it across.

By the next day, the Americans had run out of mortars and machine-gun ammunition and they couldn&#8217;t swim back across the cold river. An order came down to surrender, but they waited. The Germans called to them, saying they would be killed unless they gave up.

According to the official U.S. Army history of World War II, the division suffered 1,681 killed, wounded, captured or missing in action in those two days.

Eventually, Heiser was moved to Stalag 2B, a prisoner-of-war camp in northern Germany. As the Russians closed in at the end of the war, the prisoners&#8217; guards moved them from the camp. One night, the guards disappeared.

Like their wartime experiences, this visit, which ends when the group returns to the States on Monday, will be filled with memories: good, bad and unusual.

Some will remember the old Italian man who waited for them at the town of Paestum, where the division landed 60 years earlier to the day. A cigarette dangled from the old man&#8217;s lips as he pointed to a picture in his hand. It showed two American soldiers, a bunch of kids and an Italian woman. The woman was his mother, the kids his friends. The Americans were soldiers from the 36th. The picture was taken in a nearby town on the day of the landings.

They&#8217;ll remember San Pietro Mayor Fabio Vecchiarino telling how director John Huston&#8217;s film &#8220;The Battle of San Pietro&#8221; showed a brief clip of his mother smiling at the camera. Or how San Pietro native Mario Vecchiarino&#8217;s aunt is also shown in the film, carrying a coffin on her head to the town chapel.

But, most of all, they&#8217;ll remember the friendship and camaraderie shared by a group, Stickle said, that has become a family in just one short week.