T-birds are ready to color sky at Misawa 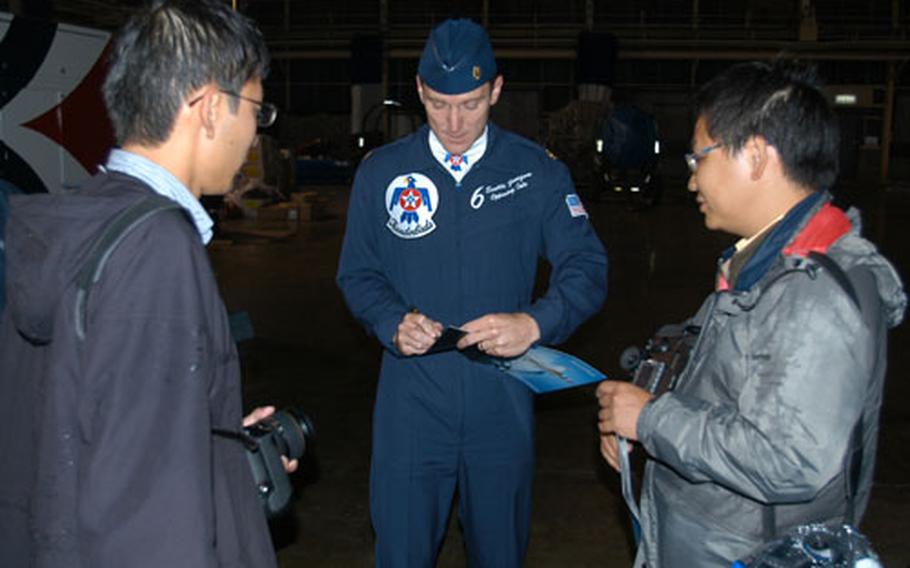 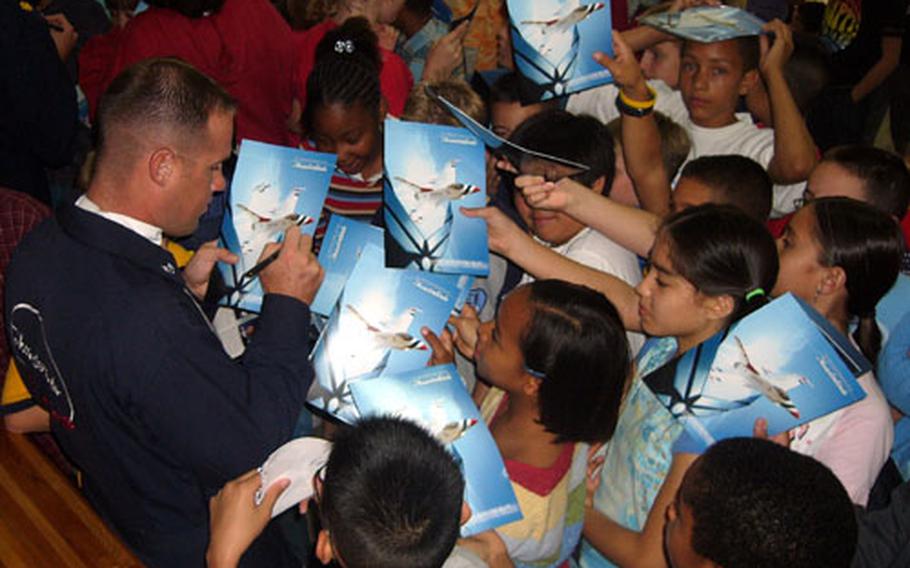 MISAWA AIR BASE, Japan &#8212; Even though Thursday&#8217;s forecast was bleak, the red, white and blue jets visiting this northern Japan base would be ready for show time.

As a steady drizzle fell Wednesday afternoon, maintainers in blue suits working a swing shift, prepared to tow the soggy F-16s into Hangar 949 to wipe them down with rags, check for maintenance problems and touch up any paint chips.

The Thunderbirds &#8212; the Air Force&#8217;s Aerial Demonstration Squadron from Nellis Air Force Base, Nev. &#8212; are wrapping up their monthlong Pacific tour with several shows in Japan.

But after dazzling crowds in Guam and South Korea, the team has yet to put on a demonstration for this island nation.

Bad weather grounded the air show last weekend at Japan Air Self-Defense Force&#8217;s Hyakuri Air Base and a Sept. 15 show at Kadena Air Base was canceled in the wake of a Marine helicopter crash on Okinawa this summer.

On Wednesday, a day before the Thunderbirds were to perform a closed show at Misawa, the team optimistically ran through a practice demonstration. Six jets took to the air, performing only a few more than 30 maneuvers in their repertoire due to low clouds as pilots familiarized themselves with the terrain in a five-mile ring around the airfield.

&#8220;We&#8217;re looking forward to putting on some great demonstrations and showing the U.S. airmen over here at Misawa, as well as the Japanese people, just what our Air Force is all about,&#8221; said Maj. Scottie Zamzow.

Zamzow, one of three fighter pilots selected for the team last year, trained twice a day for four months before the Thunderbirds&#8217; 70-show season began in March.

One of the more challenging maneuvers the team performs is the six-ship delta formation where all six jets fly together, 18 inches apart, he said.

Zamzow and the Thunderbirds will have to wait until Sunday to dazzle. The remnants of Typhoon Meari forced the team to cancel the Misawa show Thursday, leaving it with one more Japan show at JASDF&#8217;s Hamamatsu Air Base.

Show sites and schedules had to be selected carefully. Bases need to provide everything from jet fuel to sealed smoke oil drums for the jets and rental cars and lodging for personnel. Permission also must be gained for five miles across and 15,000 vertical feet of airspace.

The team lugged 83,000 pounds of passengers, luggage and cargo across the Pacific in four KC-10s, with two of the aircraft serving as tankers. Among the baggage were a spare engine, 11 extra wheel sets, 30 tire skins, red, white and blue paint and a trailer of tools and headsets.

More than half of the Pacific team is made up of aircraft maintainers, who painstakingly examine the Thunderbirds&#8217; show jets for any potential malfunction and keep their exteriors shiny and polished. Crew chiefs are assigned to a specific aircraft and ultimately are responsible for everything that happens to their F-16.

An assistant crew chief, Staff Sgt. Marisa Tui helps the lead maintainer of jet No. 3 with all maintenance issues &#8212; from changing oil to checking tire pressure. The only female maintainer on the Pacific trip also is a structural maintenance specialist, checking all the show fighters for cracks.

Though maintainers say the F-16s require a lot of upkeep, the Thunderbirds in their 51-year history never have had to cancel a show due to a maintenance problem, a streak the current crew says they&#8217;re determined to uphold.