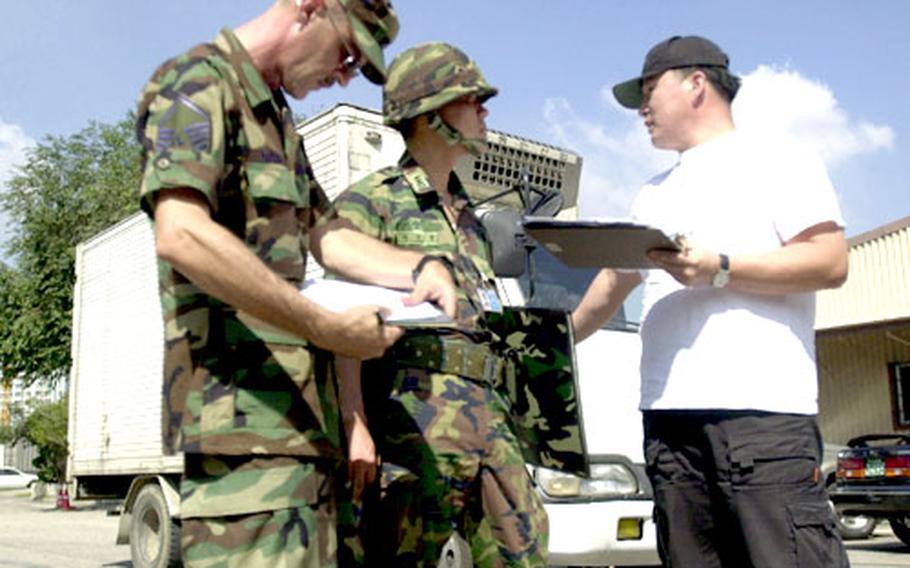 Air Force Master Sgt. Andy Davis, left, of Special Operations Command Korea, finishes paperwork during an exercise to test the transition of civilian assets into military use. A South Korean soldier and private contractor look on. (By Joseph Giordono / S&S)

CAMP KIM, South Korea &#8212; Not every part of the Ulchi Focus Lens exercise is done on computer screens in musty bunkers or green Army tents. Some scenarios, in what&#8217;s referred to as the &#8220;world&#8217;s largest computer war game,&#8221; require actual movement of actual equipment.

Part of the exercise tests the Wartime Host Nation Support (WHNS) system, which converts civilian assets to military equipment that would be used in war.

Everything from construction equipment to bottled water trucks would be &#8220;conscripted&#8221; from local contractors, officials said, adding some 1,000 different categories of support equipment that would keep U.S. and South Korean forces on the move during the early days of a possible conflict.

&#8220;Our declared intent is to defend the Korean Peninsula,&#8221; said Lt. Col. Pat Kelly, of the U.S. Forces Korea WHNS office. &#8220;But we obviously would need the help of the Korean government. This system allows us to mobilize assets in case of an emergency, and it allows us to support U.S. and ROK forces.&#8221;

If a contingency occurred, he said, shipping or flying support equipment onto the peninsula would take days. With U.S. forces tied up in Afghanistan and Iraq, Kelly said, the &#8220;strategic lift&#8221; capacity might not be available immediately &#8212; making essential the ability to use civilian assets to augment military assets.

So in advance, the command signs agreements with contractors specifying what kind of equipment would be handed over quickly in time of war. &#8220;Once we take possession, we assume all maintenance, gas, operations,&#8221; said Air Force Master Sgt. Andy Davis of Special Operations Command, South Korea.

The military also makes an agreed-upon cash payment to the contractor when it takes control of the equipment. &#8220;The system helps us to help them,&#8221; Kelly said. &#8220;This is really a great example of cooperation not just between the [South] Korean military and the U.S. military but with all branches in U.S. Forces Korea.&#8221;

WHNS serves all forces on the peninsula, he said.

On Thursday, WHNS team members completed the 11th and final field transfer exercise for Ulchi Focus Lens. In this case, it was a refrigeration truck from a local vendor, delivered to the U.S. Special Operations Command, South Korea.

&#8220;It isn&#8217;t sexy but it&#8217;s a representation of what would happen all over the peninsula,&#8221; said Larry Monaco, a civilian member of the WHNS team. In recent days, the team has traveled to an Air Force base in central South Korea to hold exercises and observe the transfer of construction equipment to 2nd Infantry Division troops at Paju.

On Thursday, Davis, clipboard in hand, inspected the refrigeration truck and handed over cash to the South Korean contractor who delivered the vehicle. &#8220;At the end,&#8221; Davis said, &#8220;we would just hand it back over to the contractor.&#8221;