System cleans up almost any water 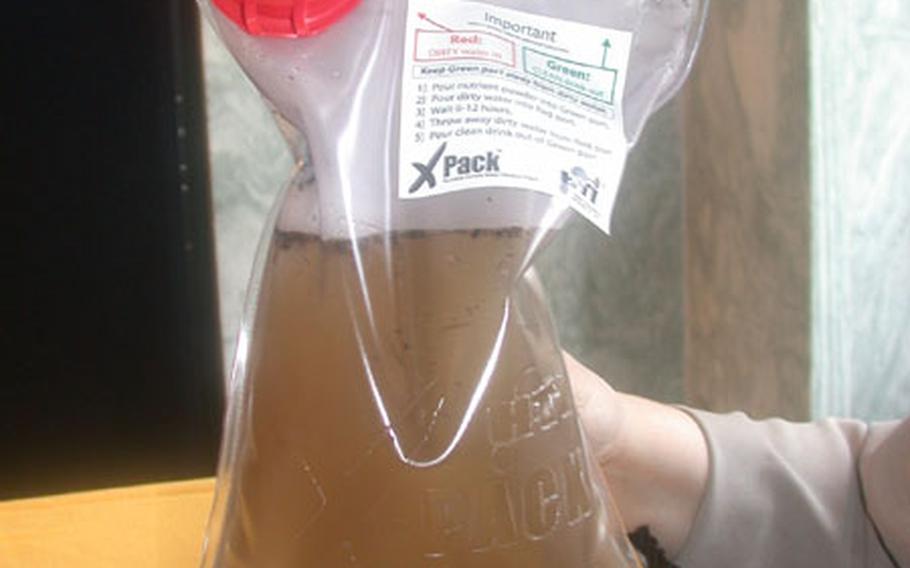 The HydroPack is a new portable osmosis bag adopted by the U.S. military from commercially developed technology. The device can produce one liter of purified water from any water source except salt water, no matter how contaminated. The osmosis filtration process removes 99.9 percent of all bacteria and viruses, according to developer Hydration Technologies Inc. of Albany, Ore. The bags have been tested by Special Operations troops in Iraq and Afghanistan. (Lisa Burgess / S&S)

The director of the Defense Department&#8217;s Combat Feeding Directorate was not trying to deter politicians and their aides seeking a free lunch during the June 17 demonstration of the directorate&#8217;s latest innovations.

Quite the opposite: Darsch was showing off an advanced, commercially developed portable water filtration device that can help prevent troops from dying of thirst when they are too far from the Pentagon&#8217;s logistics train to get fresh, clean water.

Known as the HydroPack, the device can produce one liter of pure &#8220;nutrient liquid&#8221; from any water source &#8212; except salty or brackish water, as from a sea or marsh &#8212; no matter how dirty or contaminated.

&#8220;I can literally take water from a septic tank or a toilet, place it in the bag, and about two hours later have one liter of best-quality water, complete with electrolytes and sugar,&#8221; Darsch said.

The bags are made by Hydration Technologies Inc., or HTI, of Albany, Ore., which sells them on the commercial market for $40 to $50 each, depending on quantity.

For the past two years, the Combat Feeding Directorate, which is part of the U.S. Army Soldier Systems Center in Natick, Mass., has been conducting tests with Army Rangers and special operations forces who often work far from DOD&#8217;s logistics safety net.

Water is one of the heaviest and most quickly consumed essentials troops must carry, Darsch said.

The trials have ranged from an airborne jump test in March 2002, to real-world field tests in Iraq and Afghanistan, Darsch said.

The commandos have given the HydroPack a thumbs-up, Darsch said.

According to Darsch, the HydroPack works using &#8220;forward osmosis,&#8221; a scientific principal that says molecules will always distribute themselves equally within a liquid, unless there&#8217;s something preventing that.

That something is a permeable membrane inside the HydroPack, whose microscopic holes are large enough to permit hydrogen and oxygen molecules to pass but so small that viruses and bacteria can&#8217;t get through, Darsch said.

The osmosis process is greatly enhanced by a powder made of electrolyte salts and sugar, which acts like a sponge to draw the hydrogen and oxygen molecules through the membrane wall and into a sterile chamber, while the contaminants are blocked.

Inside the chamber the clean water mixes with the powder to form a nutrient liquid that tastes like a sports fluid replacement drink.

Each bag can be used three times a day, for up to 10 days, Darsch said.

One drawback to the bags is that they don&#8217;t work without the electrolyte powder, which has to be added fresh every time the bag is used. That means the liquid they produce can&#8217;t be used for cooking, or to rehydrate freeze-dried rations, Darsch said.

The good news is that the sugars in the electrolyte solution can provide energy, while the salts can replace essential salts lost to sweating and dehydration, Darsch said.

Natick is working with HTI researchers to develop an advanced version of the bag that doesn&#8217;t require electrolytes, as well as a bag that can filter salt water &#8212; the one kind of water the HydroPack cannot filter, Darsch said.

Combat Feeding is investigating the technology to develop a product. Limited testing has been done on this item in Operation Iraqi Freedom. The item is commercially available. For more information write to: info@hydrationtech.com