Syrian forces begin battle for Raqqa with help of US advisers, airstrikes 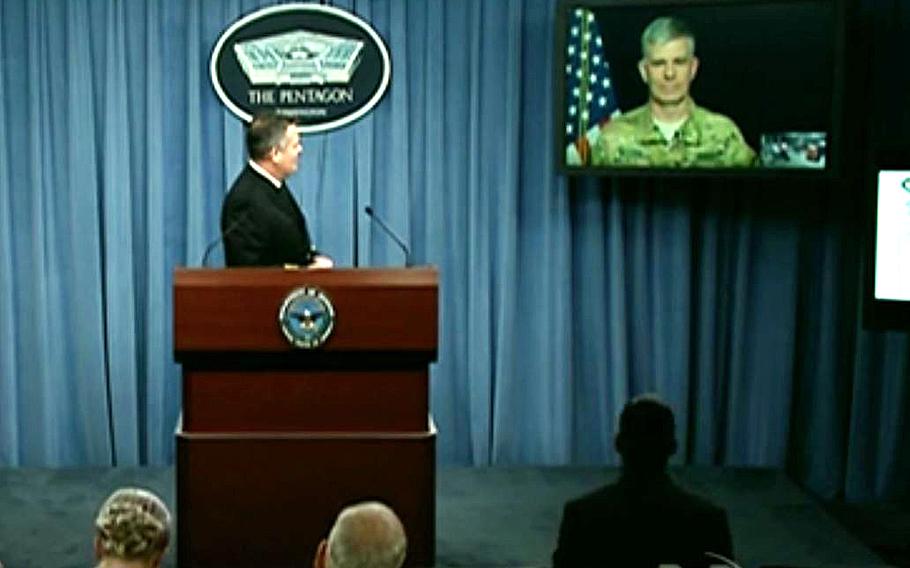 Army Col. Steve Warren, Operation Inherent Resolve spokesperson, gives a video briefing at the Pentagon, May 13, 2016. In a similar video briefing Tuesday, May 24, Warren said that several thousand fighters from the Syrian Democratic Forces were "moving on Raqqa now." ()

Army Col. Steve Warren, Operation Inherent Resolve spokesperson, gives a video briefing at the Pentagon, May 13, 2016. In a similar video briefing Tuesday, May 24, Warren said that several thousand fighters from the Syrian Democratic Forces were "moving on Raqqa now." () A B-52 Stratofortress arrives at Al Udeid Air Base, Qatar, on April 9, 2016, in support of Operation Inherent Resolve, the effort to eliminate the Islamic State militant group and the threat it poses to the Middle East and wider international community. Since Friday, May 20, coalition aircraft have conducted 10 airstrikes against IS positions in Raqqa, Syria, officials said Tuesday, May 24. (Nathan Lipscomb/U.S. Air Force)

WASHINGTON — Syrian forces aided by U.S. airstrikes and advisers have begun their assault to take back Raqqa from the Islamic State group, the Pentagon confirmed Tuesday.

Several thousand fighters from the Syrian Democratic Forces, the umbrella group that also includes fighters from the Syrian Arab Coalition and the Kurdish People’s Protection Forces, or YPG, are massed about 30 to 40 miles north of Raqqa, two senior defense officials told Stars and Stripes on the condition that they not be named. On Tuesday, those forces began to advance toward Raqqa, which is the Islamic State’s primary headquarters in Syria.

Since Friday, U.S. and coalition aircraft have conducted 10 airstrikes against Islamic State group positions in Raqqa and hit tactical units, an Islamic State garrison and oil infrastructure, according to Defense Department news releases on the airstrikes.

The two defense officials confirmed Syrian forces are being re-supplied and supported by U.S. advisers who are located behind the forward line of troops.

The Islamic State group is estimated to have several thousand fighters defending Raqqa, Warren said. In the last week, U.S. and coalition jets have dropped leaflets warning civilians to flee, warning of the coming fight for the city. On Friday, the Islamic State group allowed civilians in the city to leave, according to the Associated Press.

The effort to retake Raqqa is occurring as Iraqi forces, also aided by U.S. and coalition airpower, are advancing on Fallujah, an Islamic State-controlled city located west of Baghdad. It is believed Islamic State fighters in Fallujah are responsible for a recent string of deadly bombings in Baghdad, Warren said last week.