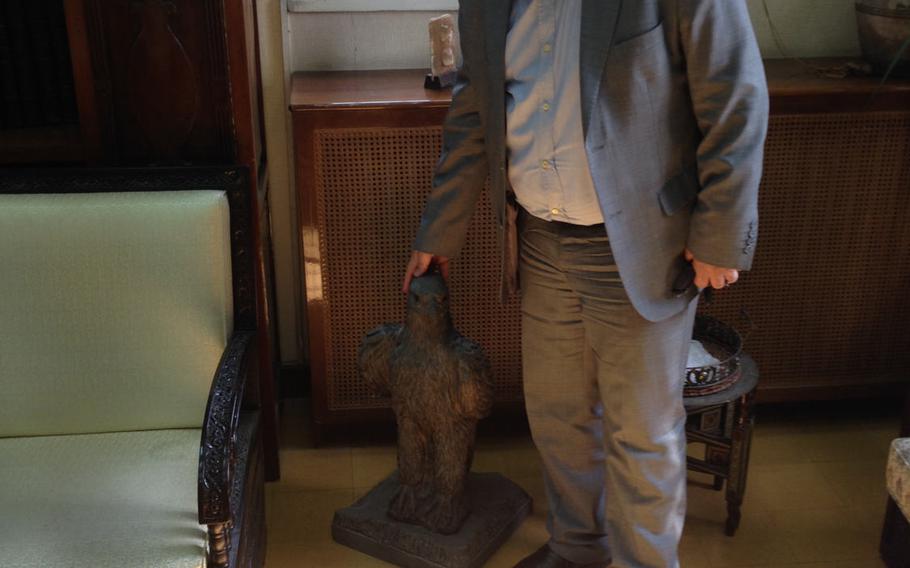 Buy Photo
Prof. Dr. Maamoun Abdulkarim, Syria's General Director of Antiquities and Museums, pats a fake "Maltese Falcon" in his office on April 23, 2016. Many of the artifacts being smuggled out of Syria for sale to Western collectors include fakes like this one, he said. (Slobodan Lekic/Stars and Stripes)

Buy Photo
Prof. Dr. Maamoun Abdulkarim, Syria's General Director of Antiquities and Museums, pats a fake "Maltese Falcon" in his office on April 23, 2016. Many of the artifacts being smuggled out of Syria for sale to Western collectors include fakes like this one, he said. (Slobodan Lekic/Stars and Stripes) Buy Photo
The National Museum of Damascus on April 23, 2016. The museum's collection was removed in 2012 and placed in a secure location until the end of Syria's civil war. (Slobodan Lekic/Stars and Stripes) 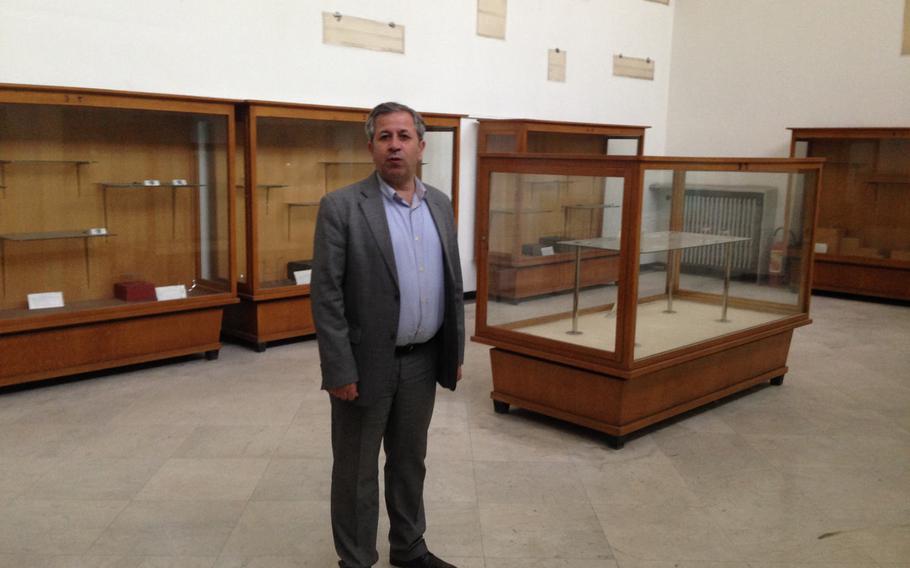 Buy Photo
Prof. Dr. Maamoun Abdulkarim, Syria's General Director of Antiquities and Museums, stands in an empty hall of the National Museum in Damascus on April 23, 2016. Almost all of the 300,000 historical items in Syria's 34 museums have been removed for safekeeping during the civil war. (Slobodan Lekic/Stars and Stripes) Buy Photo
Prof. Dr. Maamoun Abdulkarim, Syria's General Director of Antiquities and Museums, diiscuses measures taken to protect Syria's cultural heritage from looting at his office in the national museum. Almost all of the 300,000 historical items in Syria's 34 museums have been removed for safekeeping during the civil war. (Slobodan Lekic/Stars and Stripes) 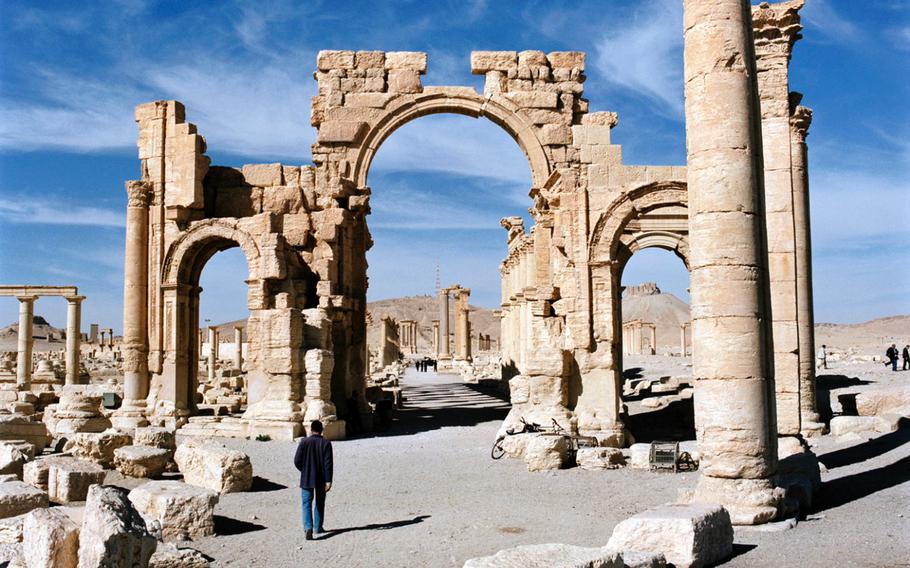 A pre- civil war photo of the ruins at Palmyra, Syria, one of the most important cultural centers of the ancient world. (Courtesy UNESCO) A pre-civil war photo of the minaret at the Great Mosque of Aleppo. The mosque has been damaged and the minaret destroyed in the fighting between government and rebel forces. (Courtesy UNESCO) A pre-war photo of the Bel Temple in Palmyra, Syria. The ancient structure was partially demolished by Islamic State militants last year. But after the recapture of Palmyra by government forces, Syrian archaeologists have said it can be rebuilt from original material left over at the site. (Courtesy UNESCO) 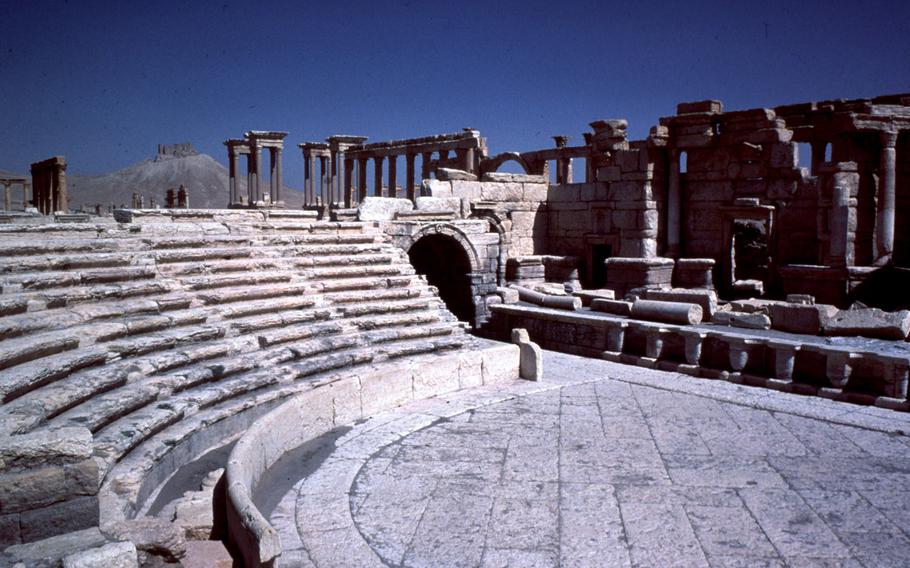 A pre-war photo of a Roman theater in Palmyra, Syria. Parts of the ancient city were demolished by Islamic State militants, who were ousted from Palmyra by Syrian and Russian forces in March 2016. (Courtesy UNESCO)

DAMASCUS, Syria — The director of Syria’s antiquities agency patted the head of a dark-grey falcon statuette in a corner of his office and smiled broadly.

“This is a fake antiquity. It was meant for American buyers,” said Maamoun Abdulkarim, general director of Antiquities and Museums. “The forgers intended it to be sold as the real, historic Maltese Falcon, not the movie prop.”

It was a rare moment of levity during a discussion of efforts to save the country’s antiquities and historical heritage from looters.

Despite the widespread destruction during the five-year civil war, Syria’s 34 museums have managed to safeguard nearly all of their vast collections, Abdulkarim said. However, archaeological sites around the country have been plundered. And the Islamic State group has famously destroyed heritage sites in areas under its control.

At least 250,000 people have died since 2011, and many cities and villages have been reduced to rubble in the fighting.

Emma Cunliffe, a researcher at Oxford University’s Endangered Archaeology in the Middle East project, said Abdulkarim’s agency had succeeded in saving a huge amount of collections and archaeological sites. “Obviously, it’s very difficult for them because they can’t reach many areas due to the fighting,” she said.

Many of the country’s sites are being systematically looted by well-organized armed criminal gangs, according to government officials and the United Nations.

It is impossible to estimate how much has been stolen, since much of the haul has disappeared into the international black market in antiques. Satellite images of archaeological sites in rebel-held areas show hundreds of exploratory boreholes dug around them.

In order to pre-empt the mass plunder that devastated Iraq’s archaeological heritage after the 2003 U.S. invasion, the Syrian government and UNESCO — the U.N. agency dealing with culture — have launched a campaign to raise awareness of the importance of preserving Syria’s heritage.

As part of the Fertile Crescent, a region in the Middle East also known as the “Cradle of Civilization,” the territory of present-day Syria has been ruled by the Babylonians, Assyrians, Greeks, Persians, Romans and Arabs. All have left behind their own layers of civilization. Syria has some of the world’s best-preserved ancient cities such as Apamea and Palmyra, and the stunning Crusader castle Krak des Chevaliers. Damascus and Aleppo, the hard-fought city in northwestern Syria, are considered among the longest continuously inhabited cities in the world.

In 2012, a year after the civil war erupted, all 34 museums were closed and emptied of their contents, their collections packed up and moved into secure locations for safekeeping. “We did not want to see them ransacked like Baghdad’s museums in 2003,” Abdulkarim said.

“Ninety-nine percent of all 300,000 objects in our collections have been saved,” the 46-year-old French-educated university professor said during a tour of the National Museum of Damascus.

However, the museum in the northern city of Raqqa was overrun in 2012 by militants of Ahrar al-Sham, a Saudi-backed Salafist militia. “We still don’t know what happened to that museum’s 500 exhibits,” Abdulkarim said.

The National Museum of Damascus has also been emptied of its treasures. Its cavernous halls are bare, their glass cases empty and large brown squares or rectangles on the walls mark where exhibits once hung.

“Clearly, the cultural heritage of Syria and surrounding regions is being impacted in sometimes extreme ways through military activity, looting, and ideologically motivated destruction,” said an article in a recent issue of the prestigious Near Eastern Archaeology magazine.

Irina Bokova, the head of UNESCO, warned recently that archaeological sites in Syria were being looted “on an industrial scale.”

“Limiting the trafficking in cultural property is a top priority because it finances the actions of the extremists,” she said.

The intense combat has damaged or destroyed many sites. The Great Mosque of Aleppo, dating from the 11th century, has been badly damaged because of its location on the front lines between the government- and rebel-held areas of the city. Its minaret, considered unique in Islamic architecture, was blown up by fighters of the Nusra Front, al-Qaida’s branch in Syria, in 2013. The city’s medieval, labyrinthine market was burned down at the same time.

The most dire threat to Syria’s heritage, however, comes from the extremist Islamic State group.

Last year, the fundamentalists, who adhere to a puritanical interpretation of Islam, overran the famous ancient city of Palmyra, located in an oasis 130 miles northeast of Damascus, Its preserved ruins were one of Syria’s prime tourist destinations before the war.

Before they were chased out in March by a Syrian-Russian offensive, the jihadists destroyed or damaged some important monuments, ransacking the city’s museum and blowing up the 2,000-year-old temples of Baalshamin, the Roman Triumphal Arch and parts of the 13th-century castle. And they beheaded Khaled al-Assad, a renowned scholar, after he refused to reveal the hiding place of some artifacts.

Despite the devastation, specialists say many of Palmyra’s monuments can be repaired or rebuilt.

“At least 80 percent of the sites are undamaged and several more can be completely rebuilt,” Abdulkarim said.

An outreach program organized by UNESCO and Abdulkerim’s agency has successfully engaged local communities and authorities to actively protect their cultural heritage by providing more security around archaeological sites in danger of being excavated. But Syrian officials complain that Western countries have provided little help in hunting down looted relics being smuggled out through Turkey.

“Some of the looting is opportunistic — the conflict has left sites unguarded, providing easy access, but other reports suggest some thefts are planned,” Cunliffe said in a telephone interview. She said that such excavations ranged from small-scale digs by “guys with shovels” to crews equipped with bulldozers and other heavy equipment.

Cunliffe said that theft from such digs was potentially more damaging than ransacking a museum. “All the items in a museum are inventoried, and as such are difficult to sell and easier to subsequently retrieve. But the objects found in illegal digs are not recorded and are therefore much more difficult to trace and recover.”

Unlike the situation with Iraqi antiquities, which flooded markets a decade ago, not many artifacts from Syria have shown up in traditional centers like Paris, Brussels or London, experts say.

Abdulkerim attributes that to a greater sensitivity to stolen artifacts in the international community since the experience with Iraq in the past decade, and to the realization that many of these may be fakes.

“Statues, coins, mosaics, icons and Bibles are being mass-produced in some areas” outside government control, he said. “This ‘Maltese Falcon’ — which the Syrian police impounded last year — is an example.”