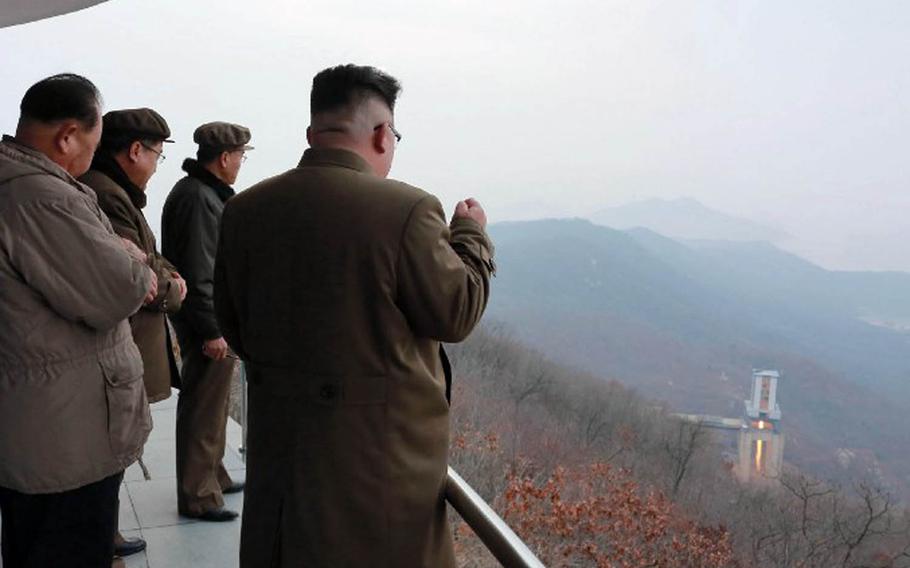 SEOUL, South Korea — President Donald Trump’s decision to target Syria with a barrage of cruise missiles wasn’t just aimed at a government air base but also at sending a powerful warning to North Korea.

While Trump insisted the missiles were needed for national security following a horrific chemical attack against Syrian civilians, the timing was a clear signal that the new commander in chief means business.

“This clearly indicates the president is willing to take decisive action when called for,” Secretary of State Rex Tillerson said, following the missile strike.

The strike was launched shortly after Trump dined with Chinese President Xi Jinping at the start of a two-day summit that is expected to be dominated by the growing threat from the North, which has conducted two nuclear tests and nearly 30 missile launches since last year.

North Korea, which is known to have a large stockpile of chemical and biological weapons, also has come under criticism for allegedly having its leader’s half brother, Kim Jong Nam, assassinated with VX nerve agent at a Malaysian airport on Feb. 13. North Korea denied any involvement in that attack.

The new U.S. administration has repeatedly suggested it will take a harder line toward Pyongyang, saying ex-President Barack Obama’s policies that relied on diplomatic pressure and economic sanctions have failed.

Trump has yet to provide details, but he and other administration officials have said all options are on the table, including military action.

Thursday’s attack — which came less than three months after Trump became president and was the first direct American assault on the Syrian government — was also a warning that the president is willing to order a unilateral military attack.

“It does seem to suggest that Trump is more willing to pull the trigger than Obama,” said Robert Kelly, a political science professor at South Korea’s Pusan National University.

“The most important thing is that Trump is new so the North Koreans don’t really know what to expect of him, so this helps set a frame for Trump in the future,” he added.

The North’s next move

What’s less clear is how North Korea and its young leader, Kim Jong Un, will respond.

North Korea, which is known for its fiery rhetoric, has warned that it too is prepared to stage a pre-emptive strike, and analysts said its actions will speak louder than words in coming days.

South Korea’s military has said the North could carry out a sixth nuclear test at any time and it is on alert for another “provocation” from Pyongyang to exploit upcoming holidays. The reclusive state is gearing up to celebrate the birthday of its late founder and the current leader’s grandfather, Kim Il Sung, on April 15 and the founding of the army on April 25.

Kelly said a lack of activity could be telling, although he stressed it would also be hard to gauge.

“Now the North Koreans don’t know what’s coming and they could react in some way that we can’t predict because they think that Trump is coming to get them,” Kelly said. “Do they get scared and pull back or do they get anxious and start building up?”

North and South Korea, which are divided by the world’s most fortified border, remain technically at war and the United States maintains some 28,500 servicemembers on the divided peninsula in a constant state of readiness.

But all-out violence has been largely contained for decades by a delicate diplomatic dance, despite North Korea’s continued defiance of U.N. Security Council resolutions and sanctions aimed at persuading it to stop its nuclear weapons program.

The North has conducted four missile tests since Trump took office on Jan. 20, including an apparent failed launch on Wednesday.

That the Syria strikes were reportedly ordered shortly after Trump had dinner with the Chinese leader at his Mar-a-Lago resort in Florida appeared to send a message to Beijing as well as Pyongyang.

Trump has not yet detailed his plans for a new North Korea policy but has said he would press China to do more to rein in its communist protégé and would consider unilateral responses if Beijing failed to act.

He told reporters on Air Force One en route to the summit that he thinks China will “want to be stepping up” in trying to deter North Korea’s nuclear ambitions, although he didn’t offer specifics, according to The Associated Press.

Beijing, North Korea’s largest military and trade partner, has shown increasing annoyance with Pyongyang. It signed on to toughened sanctions and suspended coal imports from the North through the end of the year.

But China is reluctant to go too far due to its fears that a North Korean regime collapse could lead to a refugee crisis and possibly bring U.S. forces closer to its borders.

China also is angry over the deployment in South Korea of an advanced U.S. missile defense system known as Thaad, which it fears could be used against its military. Washington and Seoul insist it is solely a defensive measure against the North.

Bruce Bechtol, a former intelligence analyst who has published several books on North Korea, noted the conflict with North Korea is more complex since any action would have to be coordinated with the South.

That is complicated by a recent political crisis, with May 9 presidential elections widely expected to usher in a liberal government that favors a softer approach toward the North.

But he said the leadership of both China and North Korea were likely to think twice about Trump’s unpredictability.

“I think there’s no doubt in Kim Jong Un’s mind and in the minds of the elite who are advising him that this is a new paradigm,” Bechtol said.