Symbols of US, Myanmar cooperation with a divergent fate 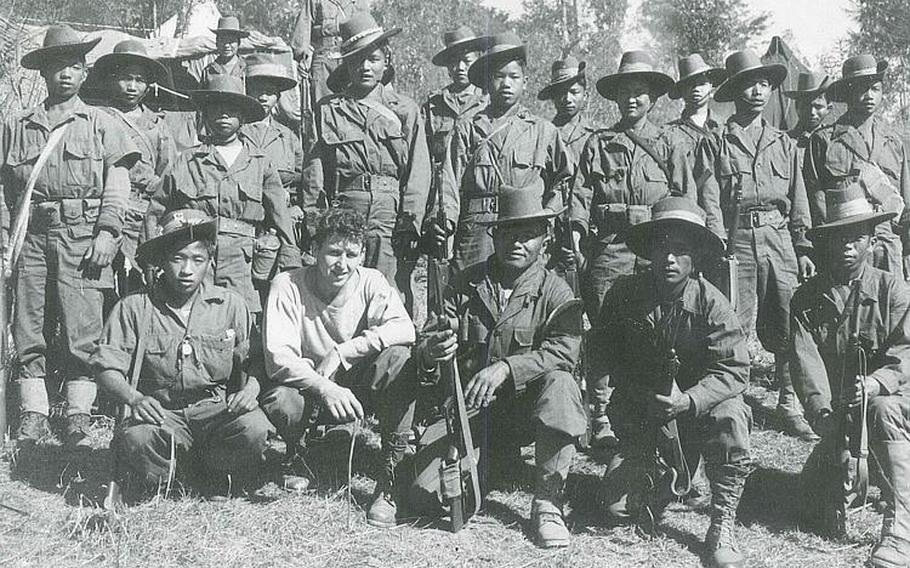 A hatless Sam Spector poses with a group of Kachin Rangers from Company C in 1944. Spector was a radio operator in Burma during World War II and transmitted coded messages via Morse code. (Courtesy Sam Spector)

A hatless Sam Spector poses with a group of Kachin Rangers from Company C in 1944. Spector was a radio operator in Burma during World War II and transmitted coded messages via Morse code. (Courtesy Sam Spector) 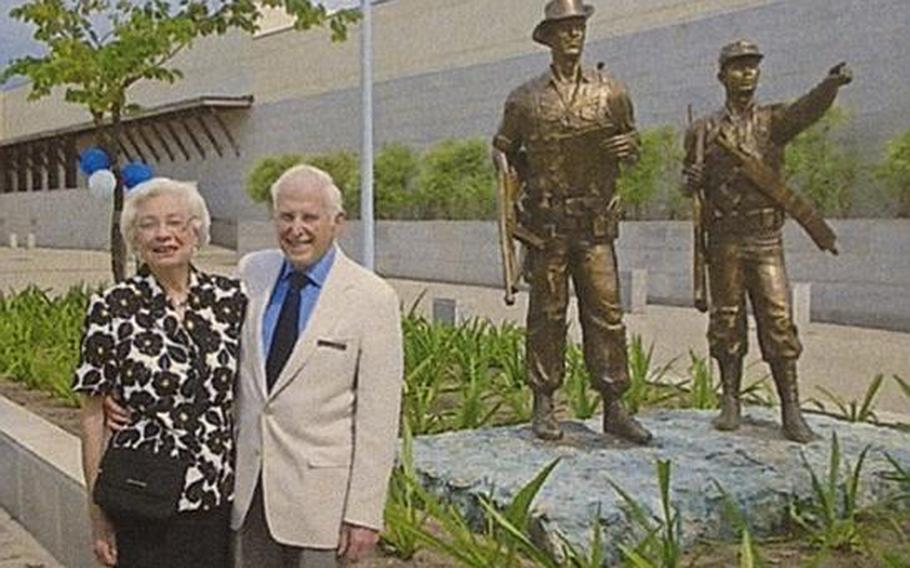 Sam Spector and his wife Virginia pose beside the Kachin Rangers statue on the day of its dedication at the U.S. Embassy in Yangon. (Courtesy Sam Spector)

YANGON, Myanmar — Standing inside the security gate of the U.S. Embassy here are two life-size bronze figures straight out of World War II.

One is a Kachin Ranger, representing the thousands of young men from the northern ethnic group who assisted Allied forces in espionage tactics against the occupying Japanese army.

Towering to his right is a statue of an American agent of the Office of Strategic Services Detachment 101. He carries a Thompson submachine gun, and the left brim of his bush hat is upturned — the hallmarks of those guerrilla-force leaders.

The dual statues are venerated each Sunday with fragrant jasmine flower wreaths draped around their necks.

Replicas of the pair were built with the intent of placing them at the headquarters of the CIA in Langley, Va. Today, those duplicates likely lie dumped at the bottom of the Irrawaddy River in Kachin State, almost 400 miles to the north.

The story behind the statues’ divergent fates began in 2003 when a small group of American WWII veterans visited Myitkyina, capital of Kachin State. More accurately, they were revisiting the city roughly 50 years after serving with OSS Detachment 101 in that region.

“When we got there we found that the Japanese had a war monument along the main street of Myitkyina, and the Americans didn’t,” said Sam Spector, 88, who was a radio operator with Detachment 101 during the war and now lives in Georgia. “We thought that if they had one and we don’t, we have to do something about that.”

They found a local sculptor named Michael Naw Bawk, whose grandfather had been a Kachin Ranger, and commissioned him to build a monument to commemorate the American-Kachin war effort. Returning to the U.S., the veterans collaborated with Bawk on the design. A year later he had completed the two figures, which were mounted on jade. The tallest stood 6 feet.

The Ranger figure was designed with his left arm pointing forward, just as the living ones did during three years of war as they guided their American allies. Together they gathered intelligence and performed sabotage behind enemy lines, helping the Allies retake the precious airfield in Myitkyina.

The veterans intended to install the statue in Myitkyina, along with a playground, near a culture center.

“We were getting ready to do that when the Burmese military at the time said no,” Spector recalled. With the help of the military attaché at the U.S. Embassy in Yangon, the statue was transported by plane to the capital. It was placed temporarily on the grounds of the residence of the U.S. chargé d’affaires, who was the ranking diplomat because the U.S. had not appointed an ambassador to the country since 1990.

The statue remained there until it was moved to the newly built embassy in 2007.

Dan Tarter, the military attaché in Myanmar in 2005-08, said the statue had the misfortune of being caught up in a coup within the controlling military junta. Myanmar’s chief of intelligence, who had possessed a relatively sophisticated attitude toward Americans in Myanmar, was ousted in 2004, he said.

“They arrested him overnight and threw all his intelligence officers in jail for life,” Tarter said. They were replaced with ordinary infantrymen, “grunts,” he said. “Things got rather harsh for a while there. The statue was one of the things the replacements thought was bad. Anything to do with foreigners was bad. So they stomped that out.”

In the midst of this, Spector said, his group approached the CIA, to which the OSS had been a forerunner, and proposed having Bawk build a replica for the agency’s museum.

“The CIA was receptive to getting it at that time,” Spector said. “We had a relationship with [the CIA] back when I was younger.” In fact, he’d earlier donated his dog tags to hang on a statue at that museum.

With the CIA showing interest, the vets in 2005 commissioned Bawk to sculpt a duplicate statue, along with 10 pair of 6-inch miniatures, or maquettes.

This time, however, Bawk was caught up in the junta’s paranoia.

When he had completed work on the statues, the military raided his workshops and arrested him. While the soldiers were loading the sculptures onto a truck, though, Bawk escaped into the jungle. He made his way through the nearby China border and then down to Thailand, said Spector, whom Bawk later contacted.

The veterans learned that the soldiers had dumped the figures into the Irrawaddy River, which runs through the city.

Later, some Kachins dived into the river and managed to retrieve three of the maquettes — one American and two Kachin figures, Spector said. They were smuggled into China, then Thailand, and then back to the U.S. Embassy in Yangon.

The embassy handed them over to the OSS vets. Spector possesses one of the Kachin maquettes that once lay in the Irrawaddy.

The CIA’s full-size replicas might or might not still be in the river — the vets have heard rumors of sightings, but their whereabouts aren’t known.

The daughter of an OSS veteran, however, has made it her mission that the original sculpture at the Yangon embassy be esteemed as much as its replica has been abused.

Paula Helfrich’s father was a lieutenant colonel with Detachment 101. She was born and raised in the country but was deported when she was 17 in 1963. She moved back seven years ago.

She buys jasmine garlands from an embassy-approved vendor, who delivers them each Sunday at 3 p.m. so that they can be placed on the statues.

“The guards happily change out the leis,” she said.

She said the flowers “honor the fighting spirit, the camaraderie, the accomplishments and the long-term partnerships” that have endured among the Kachin and American veterans in the decades since they fought side by side.