MRAPs lumber down a road under construction Saturday in eastern Afghanistan’s Tagab Valley. Provincial reconstruction teams must check to ensure contractors are building quality roads, but the drives can be dangerous. U.S. soldiers on Saturday found that heavy spring rains had swelled the waters of a nearby river, nearly tipping a vehicle that =attempted to cross through the rushing water. (James Warden / S&S)

MRAPs lumber down a road under construction Saturday in eastern Afghanistan’s Tagab Valley. Provincial reconstruction teams must check to ensure contractors are building quality roads, but the drives can be dangerous. U.S. soldiers on Saturday found that heavy spring rains had swelled the waters of a nearby river, nearly tipping a vehicle that =attempted to cross through the rushing water. (James Warden / S&S) 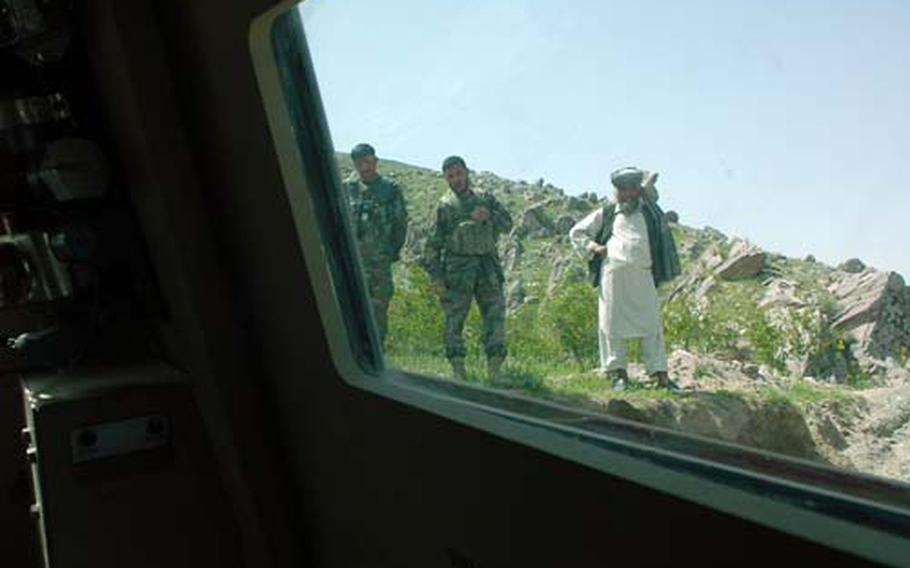 Afghan soldiers and a local villager watch U.S. soldiers try to pull out an MRAP that threatened to tip over when it tried to cross a river Saturday in the Tag Ab valley of eastern Afghanistan. Villagers warned the Americans that the water was chest high before they tried to cross. (James Warden / S&S) 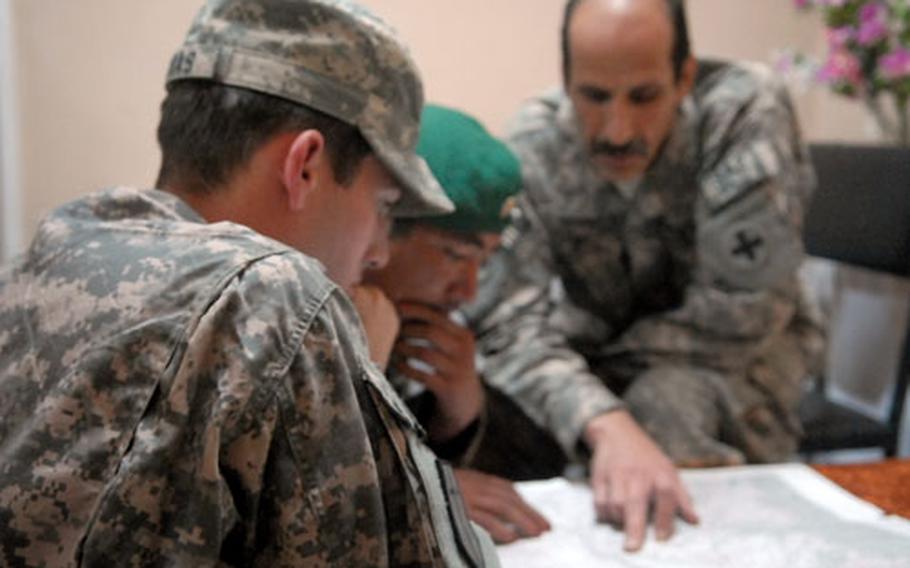 Capt. Jim Gingras, the Kapisa Provincial Reconstruction Team’s lead engineer, discusses options for inspecting a road project in Tag Ab, Afghanistan, with the commander of the local Afghan National Army unit (not pictured). The commander refused to let his soldiers go with the Americans because he thought the only route open was too dangerous to travel on such short notice. (James Warden / S&S) An interpreter (front right) translates for Afghan soldiers upset about the decision to take a risky route to inspect a road project and meet with local leaders Saturday in Afghanistan’s Tag Ab valley. The soldiers eventually decided not to go on the mission without the permission of their commander. (James Warden / S&S)

BAGRAM, Afghanistan - The Afghans motioned that the river was chest high as the U.S. armored vehicle approached the river crossing Saturday. It was a bad sign, but the top-heavy Mine Resistant Ambush Protected Vehicle continued down the steep road to a ford where the convoy could usually cross.

But as the Afghans predicted, the soldiers found that heavy spring rains had swelled the waters to whitewater kayaking levels. The ponderous vehicle crept into the river like a swimmer in a frigid pool, but the slope or the soft ground still caused it to list at a frightening angle. The rushing water prevented any attempt to right the vehicle, each move making the situation worse.

The gunner in the turret ducked inside the vehicle and battened the hatch as the passengers pondered the possibility that they might have to swim for it.

The driver backed the MRAP out slowly and &#8212; by some combination of luck and skill &#8212; managed to get it upright. Soldiers hooked a tow rope to another MRAP and pulled the stranded vehicle the rest of the way. No one got their feet wet, but it was already looking like it was going to be a bad day.

No trip can be taken for granted in Afghanistan. The Tagab district in eastern Afghanistan borders some of the most contested terrain in this part of the country. The Boudreau valley, leading into the same valley where the soldiers tried to ford the river, is an insurgent thoroughfare. Enemy fighters have long used it to venture into the area, especially now that French forces are taking the fight into areas where the fighters were once secure. Maps of enemy actions showed clusters of attacks around the Boudreau valley.

The mission actually started the day before. The Air Force-led Kapisa Provincial Reconstruction Team had to travel to Tagab to meet with local officials and check on a crucial road project. They spent the night in a luxurious lake house just on the edge of the district. It was about as far from a combat mission as you can get.

But the team then had to contend with wicked terrain. Pothole-filled switchback roads snaked their way in and out of the valley. Few rivers had bridges strong enough to hold an MRAP. At the briefing before the team left Friday, someone asked what the alternative was if the water was too high at the crossing where the MRAP nearly tipped. The answer: There was no alternative.

Still, the team had to continue its mission. After they extracted the MRAP, Capt. Jim Gingras, the team&#8217;s lead engineer, discussed other options with the contractor building the road. The contractor promised to lead them to another crossing up river that was wider and shallower.

The soldiers bumped through Afghan villages until they arrived at the new crossing. It was as the man promised, but the MRAPs would have to cross a mud flat to get to the river and then climb a small bank to get out of the river. Pulling out any stuck MRAPs could be impossible. Once across, the village streets could be too narrow for the convoy to move forward or turn around.

Gingras scouted the area and wanted to try crossing. Afghans who lived nearby told the soldiers that water trucks cross the river there daily. But Pechiney, a stealth fighter pilot who commands the PRT, vetoed the idea after a sergeant who also went to look at the crossing told him that he didn&#8217;t think the MRAPs could make it.

Instead, the soldiers would cross the river on a bridge running straight out of Tagab village and get on a road that runs right past the Budro valley. The road is hemmed in with claustrophobic walls and dense foliage that offers perfect cover for enemy fighters to attack Americans. Roadside bombs were an all-too-real possibility.

A contingent of Afghans traveling with the Americans didn&#8217;t like the idea. They told the Americans that the route was too dangerous and asked permission to bring along some more of their fellow soldiers.

Some of the American soldiers were excited about the possibility of a fight, but most were bracing themselves for a rough time. Vehicle commanders instructed others in the truck what to do if the worst happened. The convoy stopped en route and Pechiney ordered all gunners to get their guns ready to fire at the flick of a switch.

The Americans tried to contact other units to tell them where they were going, but communications stopped working as they moved into the valley floor. The soldiers switched channels on their radios and sent text messages back to headquarters from their vehicle computers but received no response. The convoy was all on its own.

As they neared the Afghan base, the Afghan soldiers flagged down the Americans. The route was simply too dangerous, they said again. They wanted their commander&#8217;s permission before they went anywhere. The Afghans left the Americans no choice. The convoy stopped at the base, and Gingras and his interpreter dismounted to go visit the commander.

The commander began by protesting that his other soldiers were too busy preparing for a mission the following day. Gingras would need 40 to 45 Afghan soldiers to go into the area, he said, and he just didn&#8217;t have enough troops to spare.

But he became more explicit as Gingras continued talking with him. The area was simply too dangerous to go into at a moment&#8217;s notice. Give him a week, he said, and they could come up with a plan to go into the area with sufficient force. For now, though, he didn&#8217;t want his soldiers in the area.

"If something were to happen to these boys, how would I answer my higher ups?" he asked.

The commander&#8217;s words effectively killed the plan. The Afghan called his own commander for support, and the answer was still no.