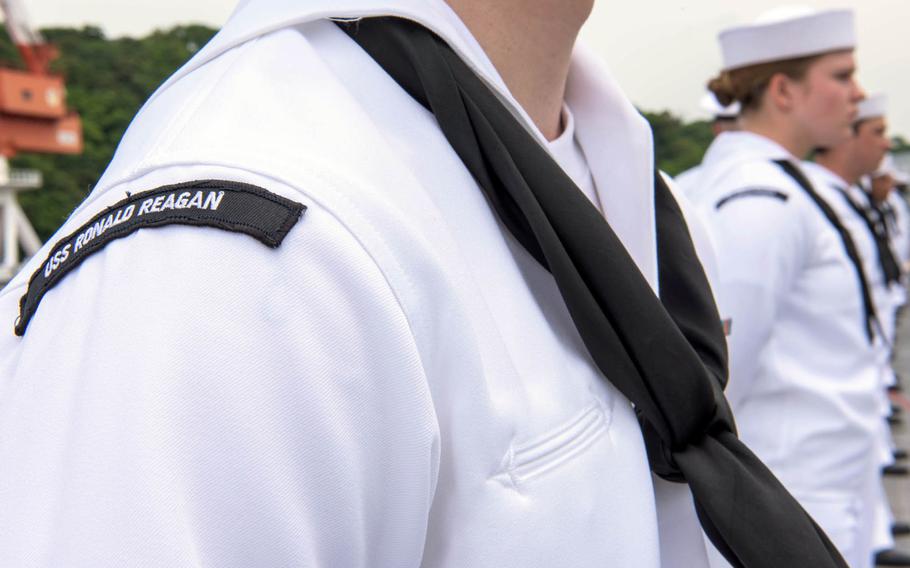 Sailors stand at parade rest on the flight deck of the USS Ronald Reagan in Yokosuka, Japan, May 16, 2017. (Kenneth Abbate/U.S. Navy)

YOKOSUKA NAVAL BASE, Japan — The Navy’s Pacific commander warned sailors against complacency and urged a back-to-basics approach to their duties during an operational stand-down ordered after a U.S. warship collided with a commercial ship for the second time in two months.

“History has shown that continuous operations over time causes basic skills to atrophy and in some cases gives commands a false sense of their overall readiness,” Adm. Scott Swift, Pacific Fleet commander, said in a statement issued Wednesday.

The servicewide, one-day safety stand-down, which is being observed at the discretion of individual commands, was ordered Monday after the USS John S. McCain collided early Monday with a Liberian-flagged oil tanker just east of Singapore, injuring five and leaving 10 missing. The pause is aimed at allowing Navy commanders to review safety fundamentals and ensure proper procedures are being enforced.

Swift directed his units to dedicate “a full workday, with full command participation” to the stand-down no later than next Monday, the statement said.

“There can be no bystanders,” he said. “Bystanders become weak links and need extra attention and leadership. During this pause, focus on fundamentals – both individual and team.”

Commands have been directed to “develop and work through challenging scenarios that address topics such as rules of the road, standing orders, Naval Air Training and Operating Procedures Standardization, operating and casualty response procedures,” the statement added.

The McCain is the fourth Navy ship to be involved in a serious accident in the Pacific this year. In January, the USS Antietam ran aground and spilled roughly 1,100 gallons of hydraulic fluid into Tokyo Bay. In May, the USS Lake Champlain collided with a South Korean fishing boat while operating off the east coast of the divided peninsula. In June, a deadly collision between the USS Fitzgerald and a Philippine-flagged merchant ship killed seven sailors and injured three. The commanding officers of the Antietam and Fitzgerald were relieved from their duties.

Adm. John Richardson, the Navy’s chief of operations who ordered the stand-down, told reporters at the Pentagon Monday that the string of accidents are “very similar” and have left Navy leadership with “great cause for concern that there is something out there that we are not getting at.”

“In the Pacific, every aspect of our training and operations support our preparedness for winning a challenging high end fight,” he said, according to the 7th Fleet statement.

“Our mission ultimately is to decisively prevail in all contingencies from war to peace. We cannot complete this mission without first mastering – and continually re-mastering – the basics of our profession.”