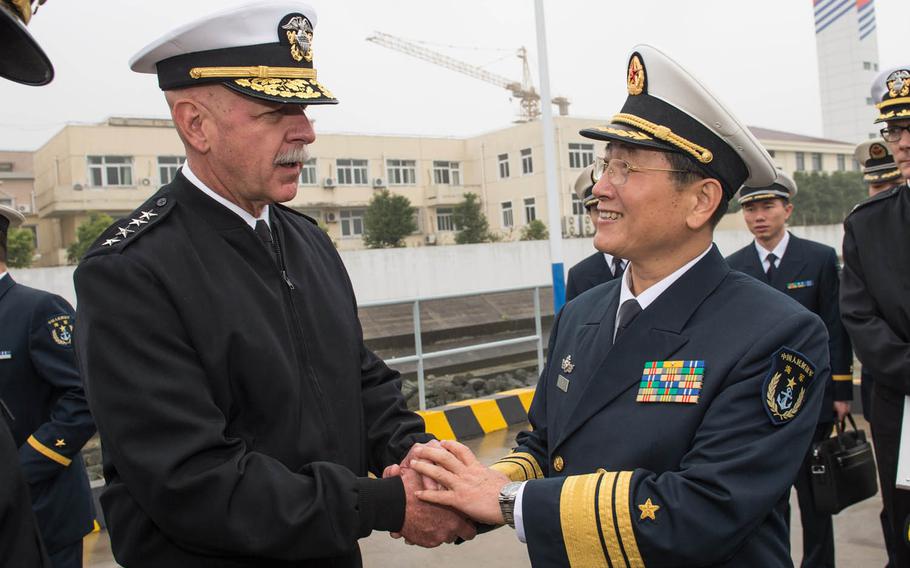 International mediation is the best solution to avoid “force and coercion” in disputes among China and Southeast Asia nations over ownership of islands in the South China Sea, the Wall Street Journal quoted the U.S. Pacific Fleet commander as saying Tuesday.

Adm. Scott Swift’s comments to reporters came during a visit to Shanghai that coincided with Monday’s arrival of guided-missile destroyer USS Stethem at Wusong naval port, the first time a Navy ship has berthed at a Chinese military facility.

Making his first trip to China, he met with his counterpart in the People’s Liberation Army Navy. As commander of the Pacific Fleet, Swift is in charge of freedom-of-navigation patrols that began last month near disputed atolls in the Spratly Islands, whose claimants include China, the Philippines, Vietnam, Malaysia, Brunei and Taiwan. U.S. officials have said four such trips are planned annually.

For the past year, China has been dredging sea sand to expand the size of the islands, some of which are little more than peaks of reef at low tide. China has built several runways and other structures on them, construction that the U.S. has described as militarization.

The Navy had avoided approaching closer than 12 nautical miles of the islands until the USS Lassen, a destroyer based at Yokosuka Naval Base, Japan, sailed near Subi Reef on Oct. 27. China has condemned such patrols as provocative actions.

Swift said he had seen no evidence that China had altered its behavior in the South China Sea since President Xi Jinping met with President Barack Obama in Washington, D.C., in September.

“I think it’s the status quo,” Swift told the Journal.

After the port call, the Stethem, also based at Yokosuka, will conduct a joint training exercise with Chinese naval ships near the Yangtze River on signaling communication and the Code of Conduct on Unplanned Encounters at Sea, PLA’s official news website reported. They will also conduct a joint search-and-rescue exercise.