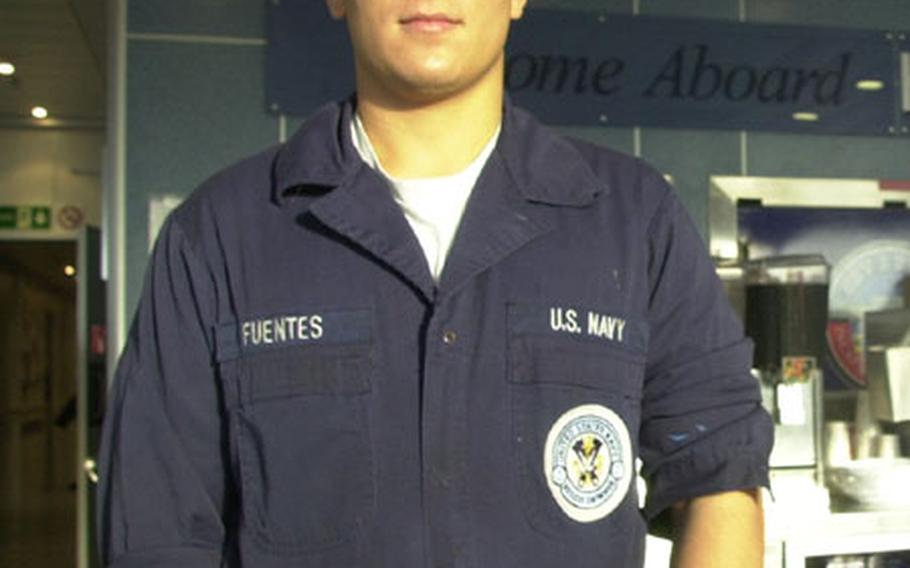 Seaman Andres Fuentes, 20, said even as a little boy, he knew trying to cross the Straits of Florida in a raft to Miami was dangerous. But it was worth it to escape communist Cuba. (Terry Boyd / S&S)

Seaman Andres Fuentes, 20, said even as a little boy, he knew trying to cross the Straits of Florida in a raft to Miami was dangerous. But it was worth it to escape communist Cuba. (Terry Boyd / S&S) Petty Officer 1st Class Nega Muluneh thought at best he&#39;d end up a talented, though relatively poor farmer like his father, Demeke. Instead, he, his wife and kids are "living the American dream," he said. (Terry Boyd / S&S)

One escaped communist Cuba. The other survived the fighting and famine of Ethiopia.

The two former refugees &#8212; Seaman Andres Fuentes and Chief Petty Officer Nega Muluneh &#8212; enlisted in the Navy for different reasons, with different goals. But they share one thing in common: They risked their lives to go to America.

When Andres Fuentes was 10 years old and living in Holquin, Cuba, his mother, Narian, decided her only son was not going to grow up in Fidel Castro&#8217;s impoverished dictatorship.

So in 1995, Fuentes, his mother and his father, Hernande, made their first attempt to raft across the 90-mile crossing to Miami.

They were caught by the Cuban police.

They tried again, but failed a second time when their raft sank.

Each time, Hernande Fuentes ended up in jail. He stayed for weeks until the family could make his bail, his son said.

Finally, on their third attempt in late November 1995, a U.S. Coast Guard ship picked them up and took them to the U.S. base at Guantanamo Bay, where Andres celebrated his 12th birthday on Jan. 7, 1996.

After months in refugee camps in Guantanamo &#8212; ironically, only a few miles from his hometown &#8212; the Fuentes made it to Miami.

The family eventually moved to Louisiana, where his father works long hours as a welder, Fuentes said. His mother, whose English is better, works as a nurse.

But a year ago, Fuentes decided to postpone college and join the Navy, volunteering in gratitude instead of the forced abeyance of Castro.

Now, he works in the Swift&#8217;s kitchen and as the ship&#8217;s search-and-rescue swimmer. He said he looks forward to qualifying as a SEAL someday.

For Muluneh, joining the Navy was the chance of a lifetime for a man who probably should already be dead.

When he was 18 years old, Nega Muluneh&#8217;s options in Gojjam Province were not terribly inviting.

If he didn&#8217;t join rebels fighting Mengistu Haile Mariam, the Ethiopian army was going to force him into service against the invading Somali army.

Armed only with his education, Nega walked three weeks to refugee camps on the Ethiopia-Sudan border, where he caught malaria and at times survived on rations of bread and tea.

He made it to Khartoum, Sudan&#8217;s capital, and worked as a houseboy for four years.

Then, in 1984, he got a break. Sponsored by the United Church of Christ, Muluneh leaped ahead of Cubans, Vietnamese, Cambodians, all vying to come to the United States.

But when he landed in Denver, he found little to like.

It was unbearably cold compared to Khartoum&#8217;s 110-degree heat. He was foundering at Denver Metro College, struggling to master the language and customs of his new land.

The Navy, he said, has given him &#8220;unlimited potential,&#8221; and shipmates say Muluneh maximizes that potential. He and his wife, Woineshet, managed to buy a house while he was still a seaman.

Now he&#8217;s a chief petty officer, the Swift&#8217;s mess management specialist. He has found a tranquil and satisfying life, he said.

Muluneh has traveled back to Ethiopia four times, and he supports his extended family. But his overriding concern is that his 14-year-old son, Daniel, and 11-year-old daughter, Sheba, make the most of their opportunities.