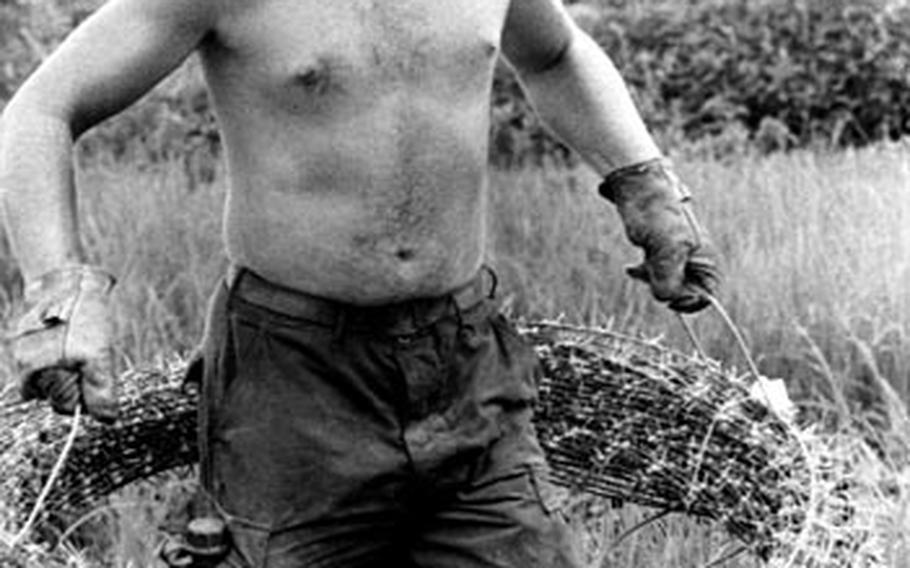 Buy Photo
A Seabee has no room for error as he carries a sharp, heavy coil of barbed wire while working on the "Da Nang Line." (Kim Ki Sam/Stars and Stripes)

In the midst of a catch-as-catch-can war that has placed a premium on mobility and speed, a World War I style line of defense is creeping inland from the South China Sea Coast just south of Da Nang.

An eight-man team of Seabees from the U.S. 62nd Navy Mobile Construction Bn. is working on the last segment of a 16-mile stretch of barbed wire and cleared earth which Allied military leaders hope will help stem the tide of any new Communist attacks on the city or the vast complex of military installations around it.

It has been rough work. The Seabees have been plowing their bulldozers through swampland and heavy jungle to clear a field of fire on both sides of the double fence of barbed wire. The "Da Nang Line" will be studded with armed watchtowers, with eight checkpoints to handle the north-south flow of military and civilian traffic.

Some military men say the barrier, much like the ones guarding the Iron Curtain in Europe, is out of place in Vietnam; that it will be difficult to defend against any sizable attack and that the guard towers would be sitting ducks for enemy snipers hiding in the thick cover flanking the cleared strip.

Its sponsors, however, point out that it provides an obstacle to enemy rocketeers trying to sneak within range of the city. The barrier runs roughly 15 miles south of Da Nang.

To get into position with their five- to 10-mile-range missiles, any Communists approaching from the south would have to cross it or make a long, hazardous trek to outflank it, making their way through the heavily patrolled mountain country, to the west.

It may work, if only as a warning system.