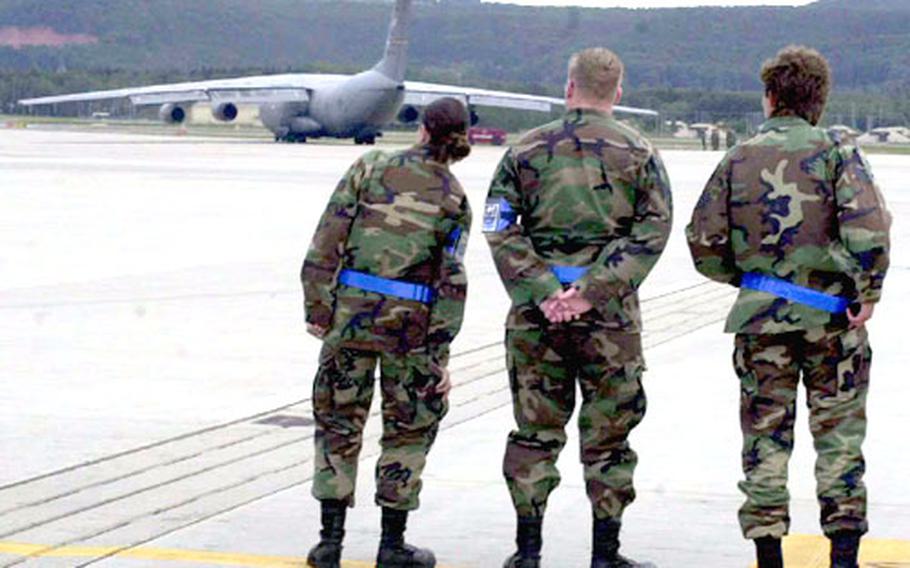 Airmen watch a C-141 Starlifter taxi before take off at Ramstein Air Base, Germany, on Friday. (Scott Schonauer / S&S)

Airmen watch a C-141 Starlifter taxi before take off at Ramstein Air Base, Germany, on Friday. (Scott Schonauer / S&S) 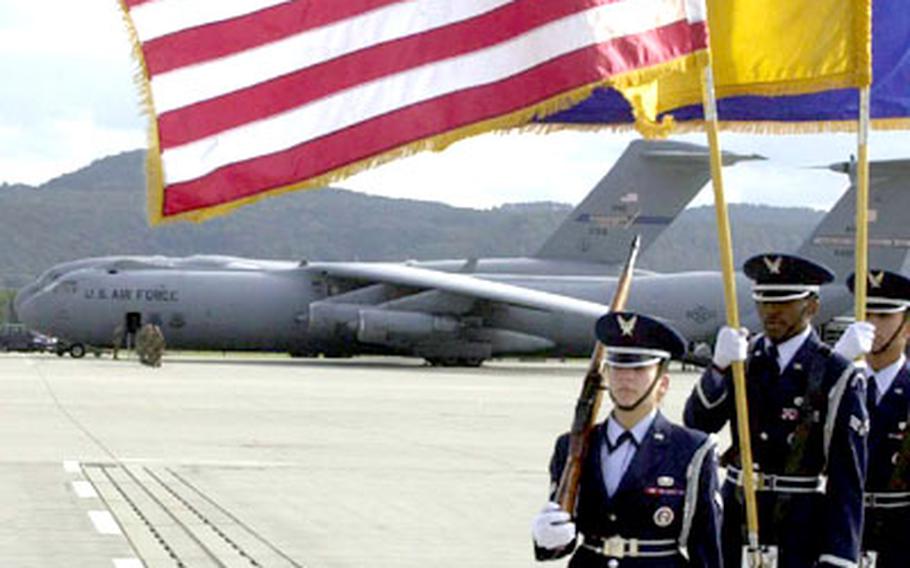 An Air Force Honor Guard stands near a C-141 Starlifter before take off at Ramstein Air Base, Germany, on Friday. (Scott Schonauer / S&S)

For the last time in its storied career, the plane took off from Ramstein Air Base packed with patients from Iraq and headed to the United States, where it will soon retire to an airplane graveyard in the desert.

The last C-141 won&#8217;t actually leave Ramstein until Saturday, when maintenance crews fly out with their gear in the very last plane, but airmen on Friday symbolically bid farewell to more than four decades of the aircraft.

One of President Kennedy&#8217;s top priorities after he was elected was to order the creation of an all-jet, military cargo plane that would become the C-141 StarLifter.

Since then, it has been involved in nearly every military conflict, from Vietnam to the war in Iraq. During Vietnam, it served as an air ambulance. It was nicknamed the &#8220;Hanoi Taxi&#8221; for airlifting more than 500 prisoners of war held by the North Vietnamese.

The plane could carry 13 pallets of cargo or more than 100 wounded patients. Maj. Hans Lauderbach, a C-141 Air Force Reserve pilot, said airmen also called the plane the &#8220;Tube of Pain&#8221; because it was so violently loud inside during flight.

It was the first plane Lauderbach flew when he got out of flight school in 1989 and it took him across the world. He has logged more than 4,500 flight hours in the C-141.

&#8220;If something was going on somewhere in the world, you knew you were to be involved in that operation because the C-141 would be there,&#8221; said Lauderbach, who works as a pilot with Federal Express when not in the reserves.

Only Air Force Reserve squadrons based in the United States fly the C-141, but they also will say goodbye to the aircraft by the end of 2006.

On Friday, airmen loaded 35 wounded servicemembers onto a C-141 before take off. As the plane taxied down the runway, a pair of firetrucks sprayed water over the plane in tribute. Airmen watching on the tarmac took photos, while some saluted.