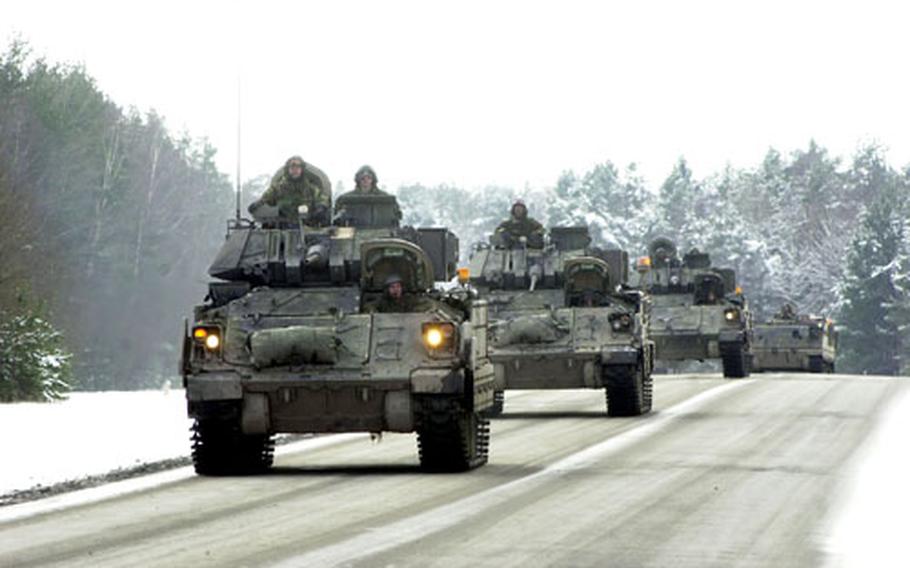 1st Armored Division units are shown in this 2003 file photo in Grafenwöhr, Germany, preparing for a possible war with Iraq. (Terry Boyd / S&S)

1st Armored Division units are shown in this 2003 file photo in Grafenwöhr, Germany, preparing for a possible war with Iraq. (Terry Boyd / S&S) 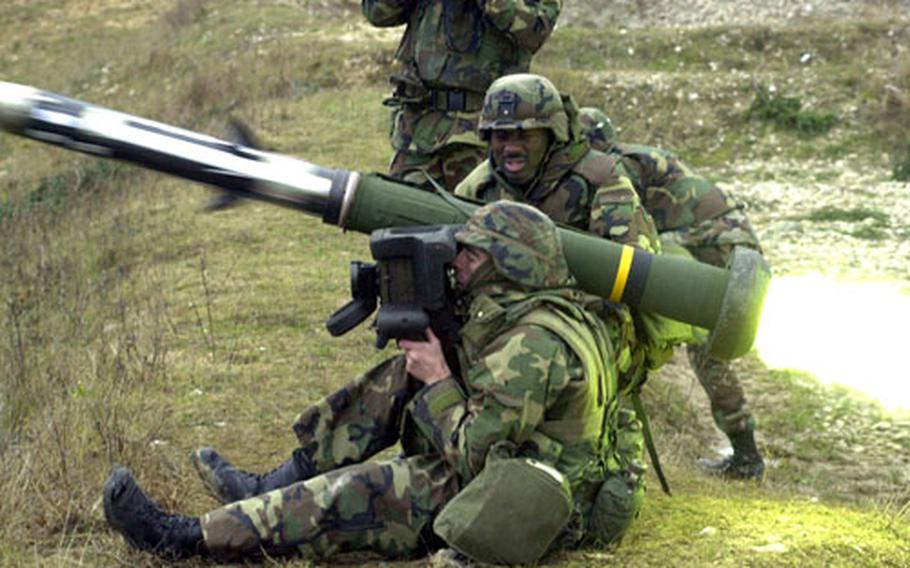 1st Armored Division soldiers shoot a Javelin anti-tank missile at the Grafenwöhr Training Area in 2002. Army officials say despite its geological faults, Grafenwöhr is still one of the best places for training. (Terry Boyd / S&S)

From the beginning, there have been reservations about training at Grafenw&#246;hr.

The Germans first considered what is now the U.S. Army&#8217;s Grafenw&#246;hr Training Area in the early 1900s, but found it too swampy, according to an exhibit from the Oberpfaltz Military History Museum in Grafenw&#246;hr.

It took a second inspection in 1904 before the kaiser&#8217;s commanders decided Grafenw&#246;hr was suitable for gunnery and artillery training, according to museum documents.

But after the advent of tanks, the main German Panzer training area was not Grafenw&#246;hr, but Wildflecken, about 100 miles west.

An ongoing geological survey of Grafenw&#246;hr related to a fatal 2002 tank accident indicates the kaiser&#8217;s men may have been correct &#8212; Grafenw&#246;hr is too swampy. It&#8217;s also geologically unstable, filled with underground caves and sinkholes, the survey indicated.

Army officials concede the training area has its flaws.

Grafenw&#246;hr is not a perfect maneuver area, but it&#8217;s as good as most, and better than many, said Col. Roger King, public affairs commander at U.S. Army Europe headquarters in Heidelberg. For example, environmental concerns, including rare animal species, limit maneuvers at many stateside bases, King said.

Grafenw&#246;hr&#8217;s karst substructure &#8212; made up of porous limestone with sinkholes and underground streams &#8212; is a concern, but a manageable one, he said in a recent interview.

As a maneuver area, Grafenw&#246;hr leaves much to be desired.

A large percentage of the area already is inaccessible or off-limits to training because of environmental impact concerns, heavy forests or surface danger zones, according to a 2004 hydro-geological study done for the U.S. Army Corps of Engineers.

Only about 6 percent of Grafenw&#246;hr is open for free maneuver exercises, with artillery impact areas making up the majority of off-limits areas, Army officials said.

Even though the ongoing study may place more of the training area off limits, the total free maneuver area could actually increase with the arrival of lighter, Stryker combat vehicle, Shoemaker said.

With the realignment of U.S. forces worldwide, there will be fewer tanks at Grafenw&#246;hr as the 1st Armored Division and 1st Infantry Division leave Germany for stateside bases. Their 68-ton tracked tanks will be replaced by much lighter Strykers, King said. Strykers weigh about 19 tons, according to Army fact sheets.

Americans started training at Grafenw&#246;hr shortly after the World War II, with the first tank maneuvers in the 1950s. Tankers attended courses at the 7th Army Tank Training Center at Vilseck, while artillery and infantry units trained at Grafenw&#246;hr and Wildflecken, according to 3rd Armored Division and 33rd Armored Regiment archives.

It wasn&#8217;t until 1998 that the 7th Army Training Command expanded from limited off-road maneuvers and initiated a live-fire exercise to train armored task forces and infantry companies at Grafenw&#246;hr, according to Army documents.

Tank crews must learn to cope with everything from blinding dust to getting stuck in mud, Zimmerman said: &#8220;I&#8217;ve seen tanks get stuck so badly they had to stop the exercise to recover [them].&#8221;

Still, Grafenw&#246;hr is the best possible range setup in Europe, a facility that the Army is unlikely to ever give up, Zimmerman said

The beauty of Grafenw&#246;hr is its proximity to the Combat Maneuver Center at Hohenfels, Zimmerman said. Crews can qualify on the gunnery range at Grafenw&#246;hr, then go straight to Hohenfels for live-fire maneuver exercises.

&#8220;You can shoot first at Grafenw&#246;hr, get soldiers qualified on weapon systems, then transfer as a company to the maneuver phase at Hohenfels,&#8221; Zimmerman said.

But, if more and more safety and environmental issues arise, Grafenw&#246;hr&#8217;s value as a training area may decrease to the point that the Army is forced to look outside Germany, Zimmerman said.