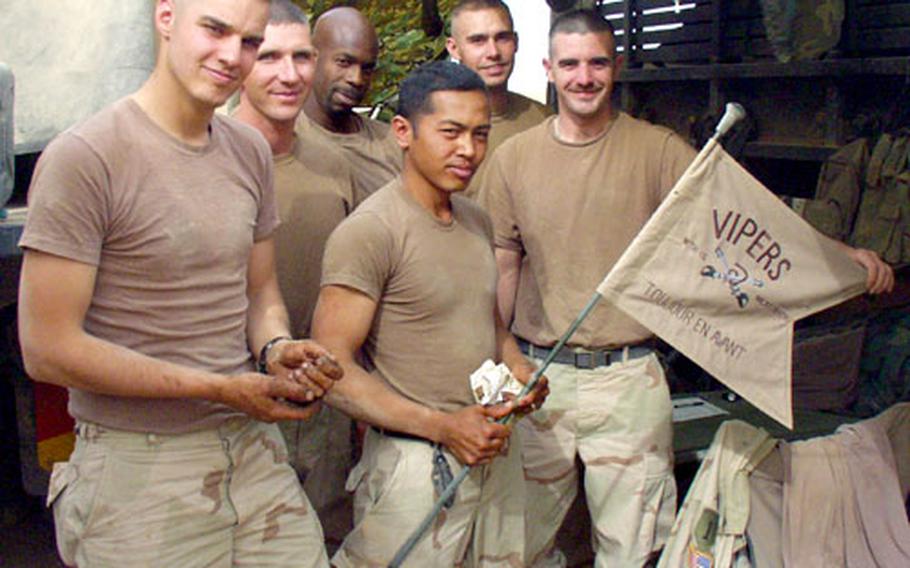 U.S. ARMY AVIATION BASE CAMP, Central Iraq &#8212; When two 11th Aviation Regiment units flew in to check out a suspicious truck, no one thought it would be full of stolen Army duffle bags.

Two AH-64D Apache Longbow helicopters from the 6th Squadron, 6th Cavalry Regiment based in Illesheim, Germany, were on a routine patrol of the area around the camp about 4:30 p.m. local time Saturday.

They spotted a blue Iraqi truck and hovered low, as they do with all trucks they see. An old man, a child and some women were in the truck, but they got out when the helicopter flew overhead.

The other aircraft landed, and the pilots looked inside. First Lt. Bryan Darilek and Chief Warrant Officer 4 Ron Thompson spotted some soldiers&#8217; duffle bags and what looked like a generator.

They called for the Viper Team, a security platoon organized by the 6-6 Cavalry&#8217;s sister squadron, the 2nd Squadron, 6th Cavalry Regiment. One of the helicopters flew to the base about seven miles away and guided them to the site.

The truck had been abandoned next to a small village called Khan ar-Rabbah, which made the soldiers a bit anxious, said the team leader, Staff Sgt. Bradford Lynch.

They surrounded the truck and set up a security perimeter. Lynch, 24, and Spc. David Boswell, 31, carefully approached it and looked inside.

They checked every inch for booby traps before unloading the truck. They counted 46 duffle bags, all from the 101st Airborne Division. What the pilots thought was a generator turned out to be a tent heater. There were two bags of camouflage netting, too.

The Vipers loaded the gear aboard their 2&#189;-ton truck and dropped it off at 11th Aviation Regiment headquarters for return to its owners.

Before they left, they asked for permission to blow up the truck. They were told to disable it without using explosives.

Lynch said they used bayonets to flatten the tires, cut the brake lines and hoses and punch a hole in the fuel tank. They smashed the windshield and headlights and broke the steering column. They left the keys inside.

No one is sure how the Iraqis got the gear. Lynch said his best guess is someone found an Army truck that had broken down during a convoy because the stolen gear also included a tire chock and truck tools.

He said recovering the gear was good experience for his Vipers, who are to guard convoys and forward refueling teams. So far, the team has not engaged the enemy.