Suspension of tuition assistance programs under fire from troops, educators 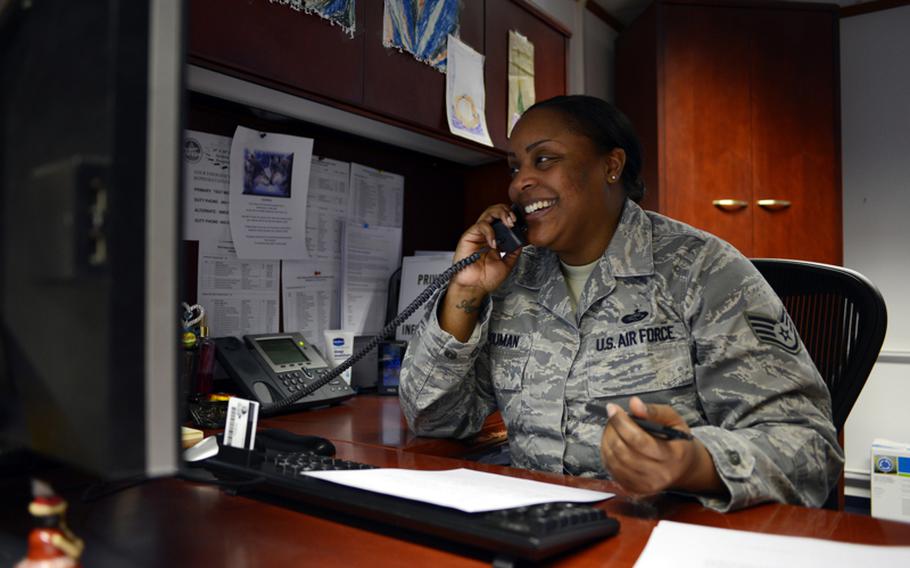 Air Force Staff Sgt. Nikia Youman, noncommissioned officer in charge of Formal Training, talks with a customer on March 13, 2013 at Ramstein Air Base, Germany. Youman is one of many servicemembers affected by the recently suspended tuition assistance program. Her family can't afford to pay for her education outright and she'd like to leave what remains of her GI Bill benefits to her children. (Joshua L. DeMotts/Stars and Stripes)

Air Force Staff Sgt. Nikia Youman, noncommissioned officer in charge of Formal Training, talks with a customer on March 13, 2013 at Ramstein Air Base, Germany. Youman is one of many servicemembers affected by the recently suspended tuition assistance program. Her family can't afford to pay for her education outright and she'd like to leave what remains of her GI Bill benefits to her children. (Joshua L. DeMotts/Stars and Stripes) 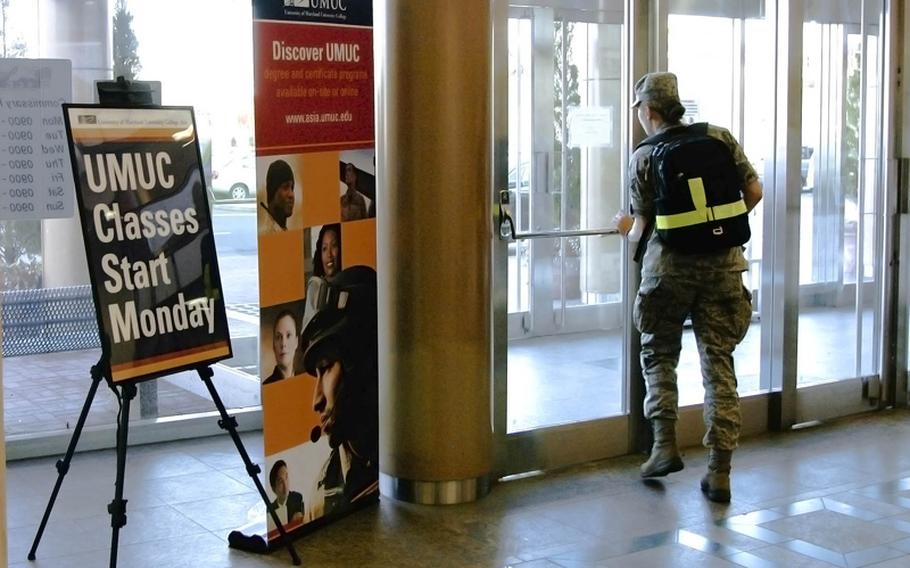 An airman walks past signs in an on-base shopping arcade advertising university classes due to start at Yokota Air Base, Japan, March 11, 2013. (Eric Guzman/Stars and Stripes)

WIESBADEN, Germany — The suspension of tuition assistance programs for servicemembers has sparked outrage, anxiety and despair.

Many servicemembers already enrolled in education programs are wondering how they’ll pay for their remaining courses; others wonder what the impact will be on their promotion potential with the military’s emphasis on education as a key factor in advancement.

Schools that cater to the military are reeling at the prospect of losing millions of dollars, and lawmakers are lobbying to overturn the decision by the Army, Air Force and Marines to suspend their tuition assistance programs. The Navy has not yet announced plans to curtail its program, but was expected to make an announcement soon.

“My biggest concern is how it may affect promotability for soldiers at the higher ranks,” said Sgt. 1st Class Wesley Thompson, a Fort Gordon-based soldier currently serving in Afghanistan, who was just passed up for a promotion.

“All the individuals in my unit who did get picked up [for promotion] all have Masters Degrees and significantly less leadership or deployment experiences than many who do not have Masters Degrees,” Thompson said. “What kind of message does that send?”

An Active Guard Reserve recruiter, who requested anonymity to avoid the appearance of speaking for his command, said it will be tougher to recruit, especially in the low-income region of Maryland where he works.

“College benefits are the absolute main reason they do it, it’s going to be pretty hard,” he said. “You start wondering what else will be cut.”

The cuts will likely save the government about $600 million a year and could affect more than 300,000 servicemembers, based on fiscal 2012 enrollment numbers provided by the services.

The benefits have long been considered one of the unique perks of military service, particularly during a time of war.

The outcry over the discontinuation of a benefit that’s helped countless troops get their degrees without going into debt has reached Congress, with lawmakers planning bills to restore funding.

A pair of senators, Kay Hagan, D-N.C., and Jim Inhofe R-Okla. will push to restore the military’s tuition assistance programs during Congress’ budget debate this week.

“Though I understand that the Department of Defense has tough budget decisions to make, I believe that it is shortsighted to completely suspend this program,” Hagan wrote in a letter to Secretary of Defense Chuck Hagel this week, according to a release from her office.

The cuts will have a “devastating impact” on enrollment at universities that cater to servicemembers stationed overseas, school officials said.

University of Maryland University College (UMUC) senior vice president of overseas operations Allan J. Berg said Tuesday that there’s no doubt student numbers will fall as a result of cuts to the programs, which provided up to $250 per semester credit hour and up to $4,500 a year to active duty personnel pursuing associate’s, bachelor’s and master’s degrees.

Enrollment at the school, which teaches 25,000 to 30,000 active duty students on 75 bases in Europe and Asia, will likely drop 10 to 15 percent next term due to the cuts, Berg said. But the academic year’s final term, over summer, would be devastated.

“Nobody saw tuition assistance suspension coming,” he said. “For our students this is such a hard blow.”

At UMUC, courses typically cost $212-a-credit hour. At that rate a bachelor’s degree encompassing 120 credit hours of study would cost $25,000 – an amount that, in recent years could be paid in full by tuition assistance, Berg said.

“The government is paying everything for most of our students,” he said.

UMUC is running financial aid workshops at bases on Okinawa, Japan, Korea, Guam and in Europe to inform students of other options for financing their degrees such as scholarships and interest free loans, he said.

University of Phoenix Asian Campuses director Tom Hawks said his for profit institution, which teaches 140,000 active duty students worldwide, will likely see enrollments drop, although it’s not yet clear by how much.

Students “are very unhappy with the military for cutting this off,” he said.

This week, officials from Southern New Hampshire University announced plans to give one-class scholarships to all active-duty military students.

Greg Mazzola, spokesman for the college, said about 800 active-duty troops took classes at the school in the last year. “We’ve heard from a lot of them already about how much the loss of [tuition assistance] is going to hurt,” he said. “We wanted to help where we can.”

The scholarships cover classes at the school’s late spring and summer semesters.

At UMUC, Berg said, the cuts in funding could also affect staff.

UMUC has 200 full-time faculty and 500 to 600 adjunct staff working in Europe and Asia, he said. “If your revenue drops by 75 percent, your costs have to do something.”

Paul Harris, an associate director of the Auburn University Honors College and associate professor of political science, said education isn’t just a tactical advantage to the individual soldier, but a strategic advantage to the entire force.

“I am hopeful that the message gets to Congress and the White House that a 21st century military requires an educated workforce; it requires soldiers who can think critically and see the big picture,” Harris said.

So, how to pay for classes?

At Ramstein Air Base, Staff Sgt. Nikia Youman, 31, is weighing her options for financing two masters’ programs that she started. She finished her bachelor’s in psychology with the help of tuition assistance, paying about $700 to $800 out-of-pocket annually. Her family can’t afford to pay for her education outright and she’d like to leave what remains of her GI Bill benefits to her children.

“I did take a big hit with it, but there are other avenues,” she said, hopeful that she can find a scholarship or grant to help defray costs. “I’m going to stop for now to figure out how I can come up with some funds. I’m determined to get my masters’ degree.”

Master Sgt. Kimberly Waters, 39, enrolled in her master’s program Wednesday – two days after the Air Force cut off new tuition assistance applications. “I was dragging my feet for all those years,” she said of waiting seven years to go back to school. “I can’t believe it.”

She plans to use her GI Bill to pay for courses but hopes tuition assistance is reinstated.

Sgt. Maj. of the Army Raymond Chandler, who used tuition assistance to earn his bachelor’s degree, said the Army understands the impact of the suspension and will re-evaluate should the budgetary situation improve.

“I also expect that leaders will continue to encourage Soldiers to explore all education options during this suspension of TA benefits, and if no other options are available at this time for Soldiers, I ask leaders to ensure their Soldiers maintain their commitment to lifelong learning,” Chandler said in an email to Stars and Stripes.

Capt. Nicholas Plante, an Air Force spokesman at the Pentagon, said there are no changes to the current promotion requirements as a result of the tuition assistance suspension, also noting others funding options.

“I think even without tuition assistance, we have a wide variety of opportunities to obtain those important credit hours that will help (airmen) achieve their degree and make them competitive for promotion,” said Chief Master Sgt. James A. Morris, the 86th Airlift Wing command chief.

For those counting on the tuition assistance, those reassurances ring hollow.

“The Army has been such sticklers about education, if I didn’t counsel the soldiers to make sure they are improving themselves, I would get into trouble,” Clark said. “Oh, the irony that is this Army.”