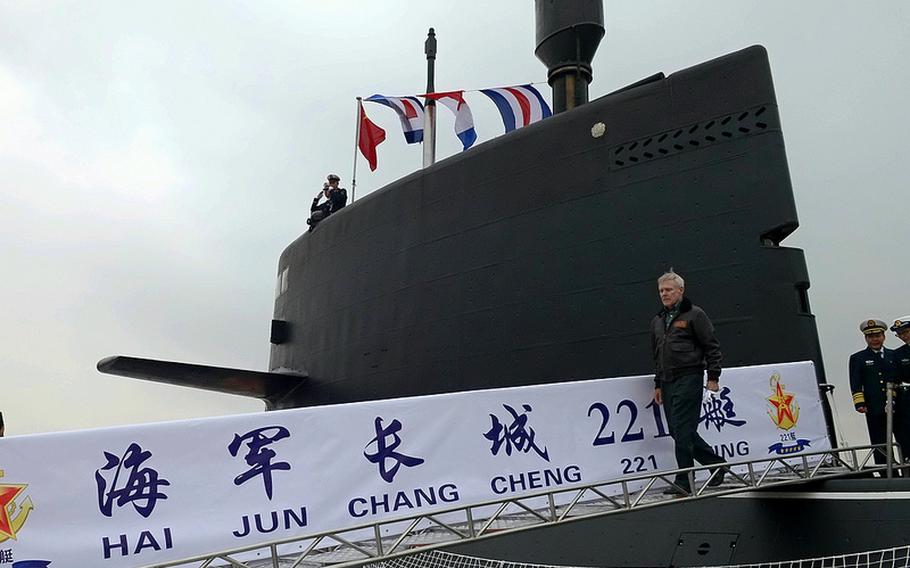 SASEBO NAVAL BASE, Japan —Foreign submarines have been spotted unusually close to Japanese turf three times this month, raising concerns that China is escalating a territorial dispute and flexing its sea might.

The subs were spotted just outside Japan’s territorial waters off the coast of Okinawa and the southern Japanese prefecture of Kagoshima. Japanese officials have either declined to comment on the vessels’ nationality or said it is not yet known; Japanese media are reporting they are Chinese.

The submarines did not infringe on Japan’s sovereignty but were traveling in a zone where it has economic rights – and were close enough to draw Tokyo’s ire. Prime Minister Shinzo Abe told legislators last week — before the latest incident Sunday — that the use of force is an option. He said the country involved “needs to understand to never take such action.”

“If submarines enter our territorial waters while underwater, they will be subject to maritime security operations,” he said.

Japanese Self-Defense Forces are allowed to use force in self-defense under this scenario, a Japanese Ministry of Defense spokesman said. The U.S.-Japan Security Treaty promises U.S. assistance in the event of a conflict involving Japan.

The escalation is alarming considering the ongoing dispute between Japan and China over the Senkaku Islands, called the Diaoyu by China, and recent comments from Chinese officials that have even questioned Japan’s claim to Okinawa, where thousands of American servicemembers are based.

China is in the midst of a dramatic military upgrade and has been trying to throw its weight around recently with multiple nations -- including the Philippines and Vietnam – over small resource-rich tracts of sea that it hopes will help fuel the country’s continued economic growth. Officials from the U.S. Navy’s 7th Fleet and Commander Naval Forces Japan declined to comment to Stars and Stripes. Defense Department officials said they were aware of the reports but much of the issue deals with classified information.

“As a matter of policy we do not comment on matters of intelligence,” said Army Lt. Col. Cathy Wilkinson, Defense Press Officer for Asian and Pacific Security Affairs. “We urge all parties to avoid actions that could raise tensions or result in miscalculations that would undermine peace, security and economic growth in this vital part of the world.”

The first submarine was spotted the night of May 2 cruising underwater west of Amami Oshima Island in Kagoshima prefecture, the MOD spokesman said. The second was detected at night on May 12 by a JMSDF P-3C aircraft south of Kume jima Island in Okinawa; it was confirmed to have left the area by Monday morning heading southeast.

Early Sunday morning, a submarine was spotted by a JMSDF P-3C aircraft navigating underwater south of Minamidaito jima Island in Okinawa. It was later confirmed to have left the area heading northeast.

In all three instances, the subs were in Japan’s “contiguous zone,” a 12-mile zone that follows Japan’s sovereign territorial seas, which extend from its shores for 12 miles. It lies within Japan’s 12-200 mile off-shore exclusive economic zone, according to the United Nations’ Convention on the Law of the Sea. The U.S. believes in the freedom of movement within exclusive economic zones, but China has asserted itself when others have ventured into its zone.

Submarines that enter sovereign territorial waters are required to surface and display their flag in accordance with international law, the MOD spokesman said. If they do not - in Japan’s case - the Self-Defense Forces tell them to leave and escort them out.

Toshiyuki Shikata, a retired Japanese Ground Self-Defense lieutenant general and professor at Teikyo Univeristy in Tokyo, said foreign submarines passing through Japan’s contiguous zone and even its territorial waters is nothing new but is alarming nonetheless.

In 2004, a Chinese nuclear-powered submarine was spotted navigating underwater in Japanese territorial waters near the Sakishima islands in Okinawa. Japan used an acoustic mine to warn that it was violating international law, Shikata said.

He said the Self-Defense Forces have Anti-Submarine Warfare Operation Centers that collect data and analyze submarine noises, which can detect the nationality of each submarine.

Shikata believes the Chinese will only stop such provocations if Japan responds.

“We cannot just leave it alone,” Shikata said. “If we do, it will continue to escalate.”