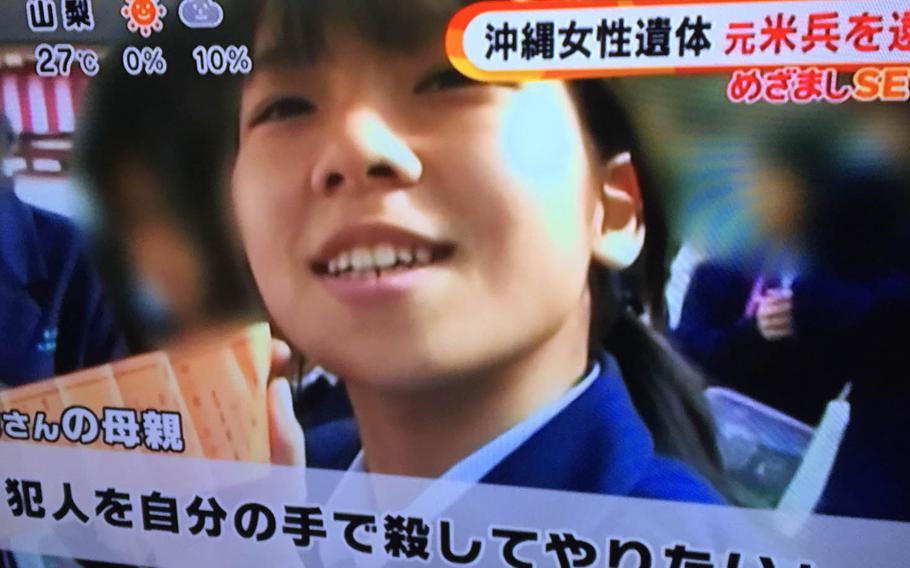 This image taken of a Fuji Television broadcast shows Rina Shimabukuro, the 20-year-old Okinawan woman who went missing in late April and was found dead last week. Kenneth Franklin Gadson, 32, who goes by his Japanese wife's family name of Shinzato, was arrested May 19 on a charge of illegally disposing of Shimabukuro's body. (Aaron Kidd/Stars and Stripes)

CAMP FOSTER, Okinawa — A former Marine suspected of killing a 20-year-old Okinawan woman told investigators she was still alive when he left her in the wooded area where her body was found, a source close to the investigation said Wednesday.

Kenneth Franklin Gadson, 32, who goes by his Japanese wife’s family name of Shinzato, was arrested May 19 on a charge of illegally disposing of Rina Shimabukuro’s body, although other charges are possible.

An autopsy conducted last week could not determine the cause of death because of severe deterioration, police said.

Gadson, a civilian working for a military contractor at Kadena Air Base, reportedly told police he attacked Shimabukuro, who was out on her evening walk, from behind with a stick before strangling her.

Police found a stick, which matched the description that Gadson provided, during an intensive search Tuesday of a river bed in the area where Shimabukuro’s cellphone GPS tracked her last known location on April 28.

A keychain was also found in the area that resembled one that Shimabukuro had with her that night, police said.

The Uruma City Assembly on Tuesday unanimously adopted a protest resolution condemning the alleged crime by “a U.S. civilian military employee.” Gadson was working at Kadena Air Base.

President Barack Obama and Japan Prime Minister Shinzo Abe will discuss the case prior to the G-7 economic summit in Ise-shima, a Japan Foreign Ministry official said Tuesday. The two leaders will hold a bilateral meeting sometime before the economic summit begins Thursday.

About 2,000 people attended a protest rally Sunday in front of the main gate of the Marine Corps headquarters on Camp Foster. About 20,000 people are expected to attend an Okinawa-wide rally scheduled for June 19.