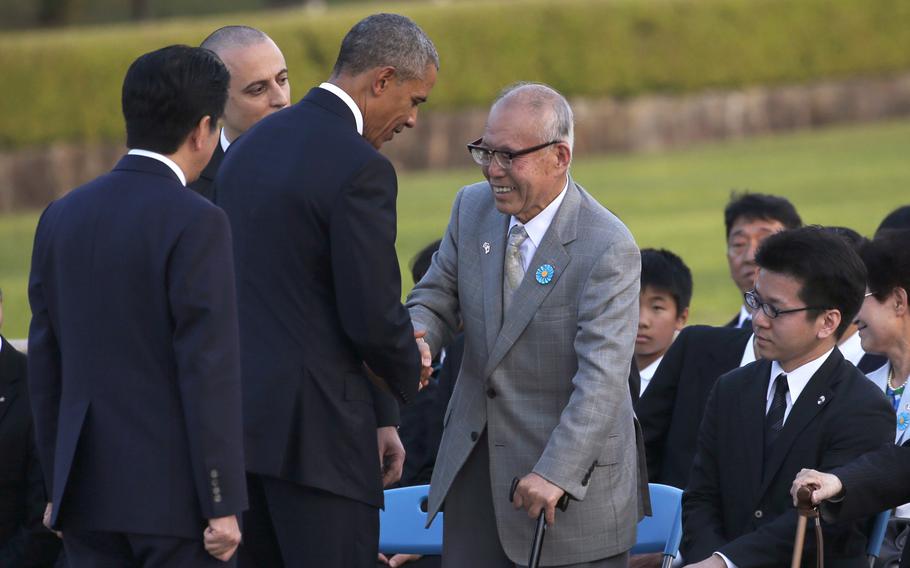 U.S. President Barack Obama, third from left, shakes hands with Shigeaki Mori, an atomic bomb survivor and a creator of the memorial for American WWII POWs killed in Hiroshima, during a ceremony at Hiroshima Peace Memorial Park in Hiroshima, Japan, Friday, May 27, 2016. Obama’s visit Friday to Hiroshima was generally welcomed by the city’s people, particularly relatives and survivors of the 1945 atomic bomb attack. (Shuji Kajiyama/AP)

Hiroyuki Tatsumi, 76, a retired teacher, was 5 years old when his father died from radiation sickness, 16 days after the massive blast.

Tatsumi said he understands that many Americans view the Hiroshima and Nagasaki bombings as events that quickened the end of WWII. That hasn’t lessened Tatsumi’s deep hatred for what he called an “abominable weapon.”

“Nuclear weapons are not a threat from the past,” Tatsumi said. “They are an imminent threat to the world today and to our future generations.”

“I am sure his visit will develop a momentum for the world to move toward nuclear arms reduction,” said Morino, whose mother survived radiation exposure after she searched Hiroshima for her cousin, the day after the bombing.

Obama made it clear prior to arriving that he would not be apologizing for the atomic attacks 71 years ago. Japanese officials made it equally clear that they weren’t looking for one, despite calls among some peace activist groups.

Kazue Hashigami, 63, of Hiroshima, said it wasn’t Obama’s responsibility to apologize for something that happened before he was born.

“What matters is for him to see and feel that the tragedy was real,” said Hashigami, whose father was 15 when the bomb fell.

In interviews with 115 atomic bomb survivors, 15.7 percent said they wanted to an apology from Obama, according to a Kyodo News poll released Sunday.

Today’s Hiroshima is nothing like the historic images of ashes and destruction. It is a city of 1.2 million people, with modern amenities and a nearby U.N. World Heritage site renowned for its natural beauty.

Despite that, the word “Hiroshima” remains synonymous with disaster for many outside Japan. The Hiroshima residents who spoke with Stars and Stripes say they know that, and to a point, they are comfortable with it.

“It cannot be helped that Hiroshima is connected with atomic bomb,” Hashigami said. “It is a symbol. And we need to keep the legacy because it is a message to the world.”