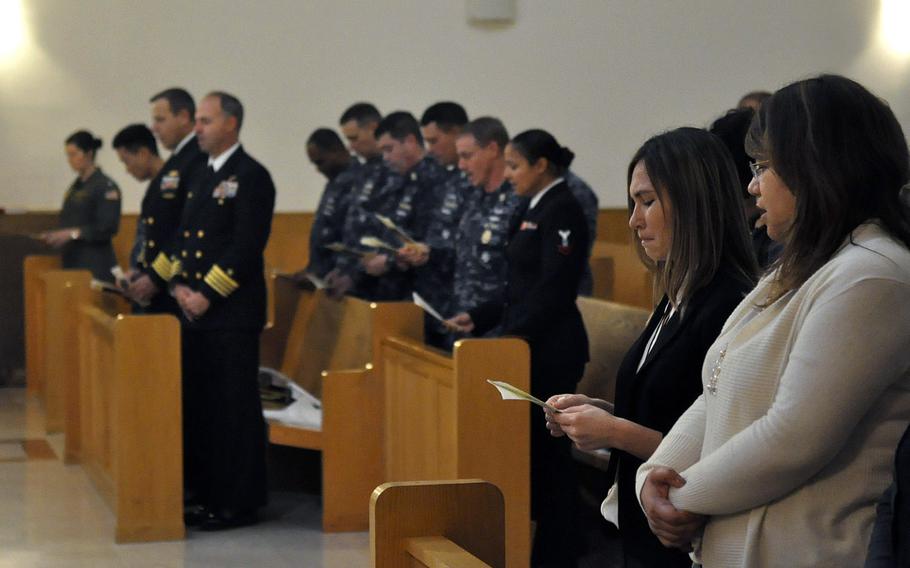 Buy Photo
Jennifer Cruz, holding the program in the foreground, participates in a Nov. 12, 2013, ceremony commemorating the 1988 bombing of the city's USO club, which killed her sister, Petty Officer 3rd Class Angela Santos, and four Italians. Maurizio Garzelli, a USO accountant and survivor of the attack, also spoke during the program. (Steven Beardsley/Stars and Stripes)

Buy Photo
Jennifer Cruz, holding the program in the foreground, participates in a Nov. 12, 2013, ceremony commemorating the 1988 bombing of the city's USO club, which killed her sister, Petty Officer 3rd Class Angela Santos, and four Italians. Maurizio Garzelli, a USO accountant and survivor of the attack, also spoke during the program. (Steven Beardsley/Stars and Stripes) 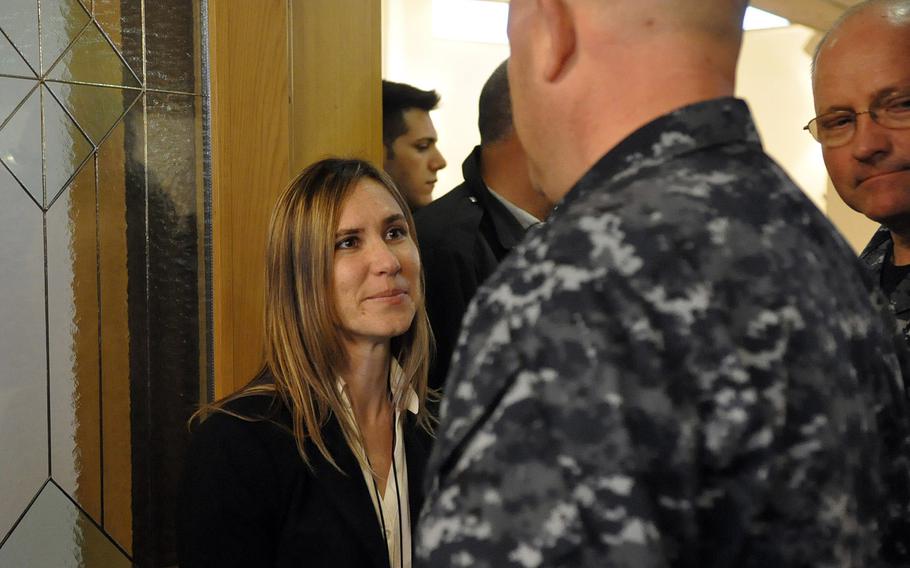 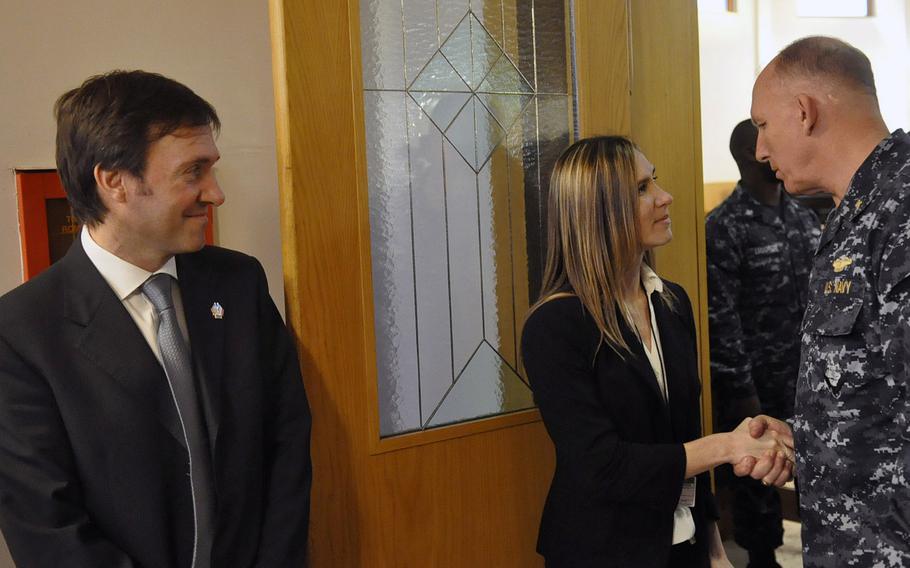 Buy Photo
Jennifer Cruz and Maurizio Garzelli, left, greet Navy personnel in Naples, Italy, following a Nov. 12, 2013, ceremony commemorating the 1988 bombing of the city's former USO club. Cruz's sister, Petty Officer 3rd Class Angela Santos, was one of five people killed in the blast. Garzelli was working at the club on the night of the attack. (Steven Beardsley/Stars and Stripes) 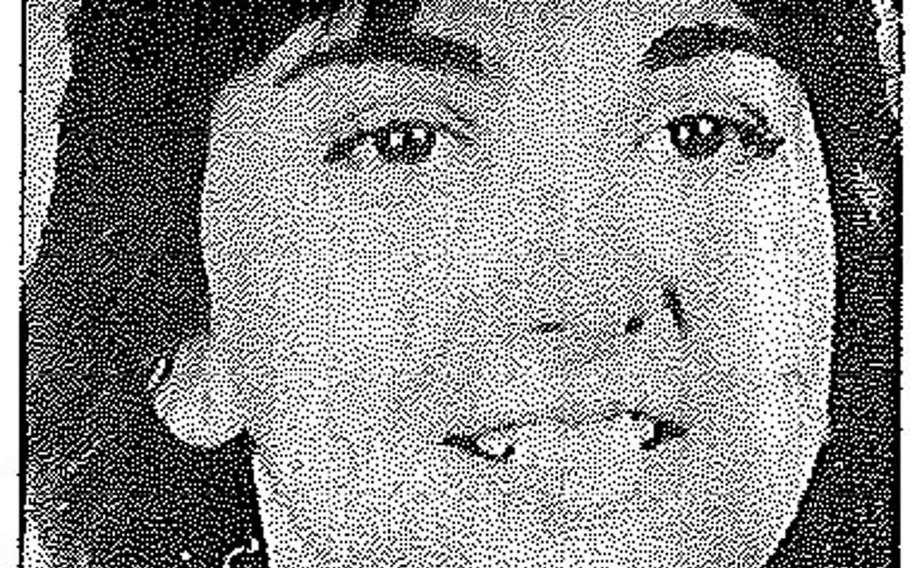 Petty Officer 3rd Class Angela Santos was one of five people killed in the 1988 car bomb attack against the USO club in Naples, Italy. A Nov. 12, 2013, ceremony at the naval base in Naples commemorated the attack and Santos' death. Among the speakers were Santos' sister, Jennifer Cruz, and survivor Maurizio Garzelli, a USO accountant. (Courtesy USO Naples)

NAPLES, Italy — Jennifer Cruz was five years old when a car bomb exploded outside a packed USO club in this southern Italian city, killing her sister — a petty officer and budding musical talent.

Maurizio Garzelli was a 26-year-old USO employee who survived the attack but struggled with anxiety in its aftermath.

During a Nov. 12 ceremony at the naval base here to commemorate the 25-year-old bombing and its victims, Cruz and Garzelli came together for the first time to recall an attack that changed their lives and was yet another reminder that overseas troops remain targets even in peacetime.

“I always think about that night,” Garzelli said in an interview. “It’s not easy to forget.”

It was the evening of April 14, 1988, and the USO was holding a talent show for sailors from two Navy frigates ported in the city, the USS Paul and the USS Capodanno. Ships arrived regularly in those days, Garzelli said, and sailors flocked to the USO in search of phones, pool tables and televisions.

Among the crowd was Petty Officer 3rd Class Angela Santos, a 21-year-old radioman from Ocala, Fla., who was stationed at Naples and had recently started volunteering with the USO. A guitarist and singer who had recorded personal compositions, she was also interested in the talent show.

One of Cruz’s earliest memories is of Santos playing the guitar at home.

“I sat in her lap and she put the big guitar in my arms, and my fingers were just so small I couldn’t even wrap my hands around it,” Cruz said. “And she helped me strum.”

If convenient for sailors coming off ported ships, the USO center was, by modern standards, vulnerable to attack. Located by the port and surrounded by tight alleys with no security barriers or ID checks, it was a throwback to when terrorism was just beginning to shape force protection measures across the globe.

Recent bombings had given military officials reason for concern. Car bombings twice targeted servicemembers in Frankfurt in 1985, once at Rhein-Main Air Base and again at the post exchange. Other attacks focused on troops outside their bases, such as a 1985 bomb in a Madrid restaurant frequented by airmen and one at a West Berlin disco in 1986.

Following the lead of other USO centers, the Naples branch installed bulletproof glass on the exterior and made other small modifications, Garzelli said. But few believed the center was a legitimate target.

“After (the bombing), then we were like even in Naples they can do something like that,” Garzelli said. “But before that, we never thought about it.”

The show was running late and sailors were just beginning to leave the stage area for the exit when the blast hit. Garzelli had been outside, talking to a regular at the center — Antonio Gaezza, a 62-year-old Italian man who sold souvenirs outside and whom sailors called “Popeye” — before he headed back inside toward the stage.

“The moment, I just saw this fire, this thing,” Garzelli said. “Then, after two seconds, I realized it was a terrorist attack. So we start to call each other. We start to call everybody’s name to see if everybody was OK, and of course Angela was missing.”

He later saw her body, covered with a sheet inside the building. Someone had covered it with a flag. Also among the dead was Gaezza, who had been seated outside.

“He invited me two minutes (before) to sit out there, and I was going out there to sit with him, but when I saw all the people coming up, I thought maybe they need my help coming up,” Garzelli recalled.

In Florida, Cruz remembers a cameraman coming into her house, seeing herself on TV and then a picture of her sister and damaged buildings.

“My mom was crying so hard I just knew that Angie would never be back,” she said. “That’s all I knew.”

Five people were dead and 18 wounded. Investigators determined the blast came from a Ford Fiesta parked across from the building. The stage’s location in the basement and the late exit of sailors upstairs likely spared more from being killed.

Blame was quickly assigned to Junzo Okudaira, a member of the Japanese Red Army, a now-defunct leftist militant group tied by investigators to the Libyan regime of Muammar Qaddafi. The blast occurred on the anniversary of the Navy’s bombing of Libya two years before.

Years passed and Cruz learned more about her sister. In her early teens, she found cassette tapes of Santos playing the guitar and singing and hastened to preserve them on CD. She also learned more about the political motivations and connections of the group responsible for Santos’ death.

Although the Red Army’s founder was convicted and imprisoned in Japan in 2006 for other attacks, Okudaira has never been captured.

“I just don’t understand how someone can do that,” Cruz said. “Set a bomb like that to hurt somebody else.”

Garzelli fought anxiety in the aftermath of the attack, and he was taken to the hospital for a panic attack about a year after the blast, he said. But he stayed with the USO, helped rebuild it in a different location and lead the drive to dedicate part of the structure to Santos.

Now working as an accountant for the organization, Garzelli met Cruz, a high school Spanish teacher, as she deviated from a tour of Rome to visit Naples for the first time. She had contacted the USO, which arranged the meeting and the memorial.

Cruz spent the night at a hotel just down the street from the bombing site, which she didn’t recognize until Garzelli pointed it out. After 25 years, the little sister finally had an image to place alongside the stories and facts and memories she continues to gather.

“When it happens when you’re so little, it’s just a part of your life,” Cruz said. “And then, when I got older and started to be aware of things and the world and what’s happening, then I started to research, and it impacted me. I want to know more, and why.”