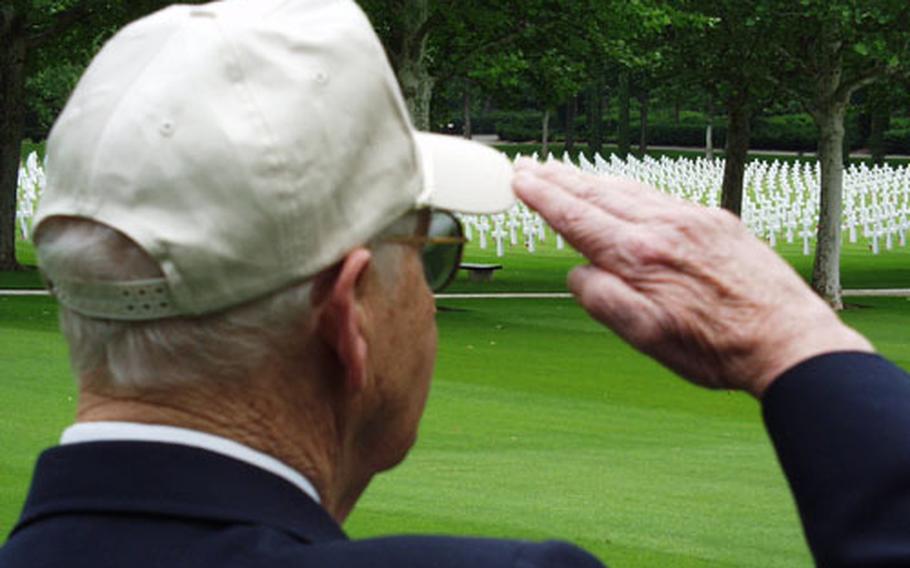 Peter Austin, a World War II veteran, salutes the flag during the playing of the national anthem at a Memorial Day Service at the Florence American Military Cemetery in Italy. Crosses marking the burial spots of thousands of his former comrades are in the background. (Kent Harris / S&S)

IMPRUNETA, Italy &#8212; It&#8217;s been almost 60 years since members of the 10th Mountain Division attacked a series of heavily fortified positions in the hills north of Florence in some of the heaviest fighting of World War II.

But there are times, such as Memorial Day, that the years seem to slip away.

A group of more than 200 veterans and their family members made the pilgrimage from the United States to Florence to remember their fallen comrades and loved ones.

It&#8217;s become a tradition for the 10th, which lost almost 1,000 soldiers in Italy. More than 300 of them are buried in the Florence American Military Cemetery, just a few miles south of the city that draws millions of tourists each year.

But those visiting the cemetery Monday weren&#8217;t interested in marveling at the large, marble statue of David nearby. After attending a memorial service, they were straining their eyes to make out the names on thousands of white crosses that sprouted hundreds of years after the time of Michelangelo.

To the veterans, some of those names belonged to faces from the past.

Peter Austin, making his fourth visit to the cemetery with his wife, Jane, had one particular cross in mind. That one held the name of his friend Mitch, a fraternity brother who joined the unit at the same time he did.

Austin, a quartermaster with the division&#8217;s headquarters, survived to tell about his experiences. His friend didn&#8217;t.

He said there are still about 2,400 World War II veterans in the division&#8217;s association, though there are fewer every year.

Mattson didn&#8217;t let his age stop him from making his first trip to the area since he was injured.

Ruso Perkins, 88, was visiting the cemetery for the ninth time. A staff sergeant when he left the military, Perkins made his first trip with other former members of the division in 1962. Every three years since then, with a few exceptions, former members of the division have made the trip &#8212; centered on the Memorial Day service and visits to some of the mountain towns they helped liberate.

Austin said the people of those towns often throw parties to thank the Americans.

Monday, hundreds of Americans and Italians gathered at the cemetery to do the same thing. Among the Americans was a platoon from the 173rd Airborne Brigade from Vicenza, which is currently deployed to Iraq. The Southern European Task Force (Airborne) also supplied a color guard and rifle squad.

James Nicholson, the U.S. ambassador to the Vatican; Rear Adm. Richard Jaskot, deputy for plans and policy for the U.S. European Command; and Italian Sen. Francesco Bosi, the undersecretary of Defense, were among those making remarks.

John Duffy, president of the 10th Mountain Division&#8217;s National Association, paid tribute to the 975 soldiers from the division he said were killed in Italy and to the thousands of others who are buried in cemeteries around Europe.