Survival in the outskirts 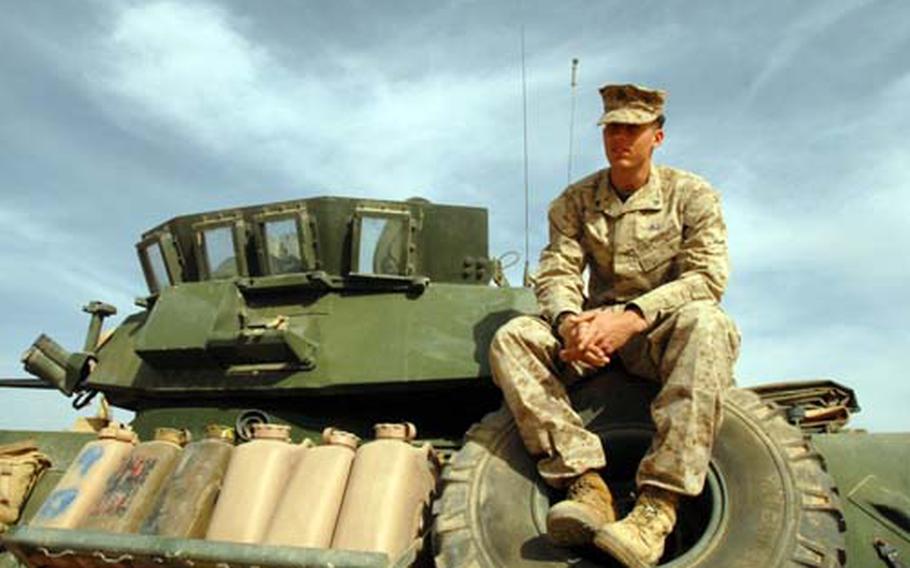 Cpl. Asa Akins sits on top of a Light Armored Vehicle at Al Asad Air Base, Iraq. Akins was one of 28 Marines who conducted a three-month presence patrol along in Anbar and Ninewa provinces. The group lived and worked out of four LAVs during their patrol, meeting with military convoys every three or four days to resupply themselves. (Ashley Rowland / S&S)

Cpl. Asa Akins sits on top of a Light Armored Vehicle at Al Asad Air Base, Iraq. Akins was one of 28 Marines who conducted a three-month presence patrol along in Anbar and Ninewa provinces. The group lived and worked out of four LAVs during their patrol, meeting with military convoys every three or four days to resupply themselves. (Ashley Rowland / S&S) 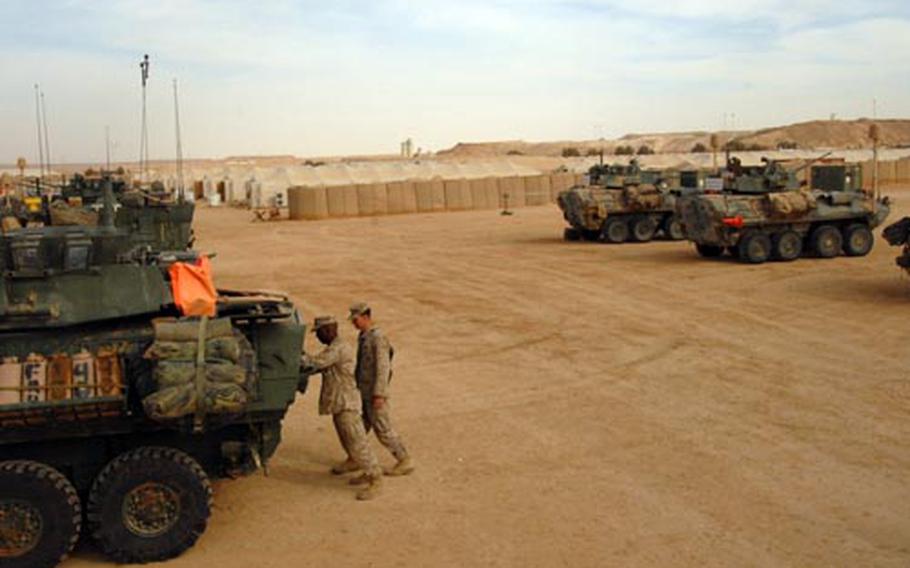 Sgt. Lonnie Richards and Cpl. Asa Akins close the door of a Light Armored Vehicle at Al Asad Air Base, Iraq. The Marines and their LAVs recently returned from an 87-day patrol of the Iraqi border, and plan to leave for another patrol after a few days of rest and vehicle maintenance. (Ashley Rowland / S&S) 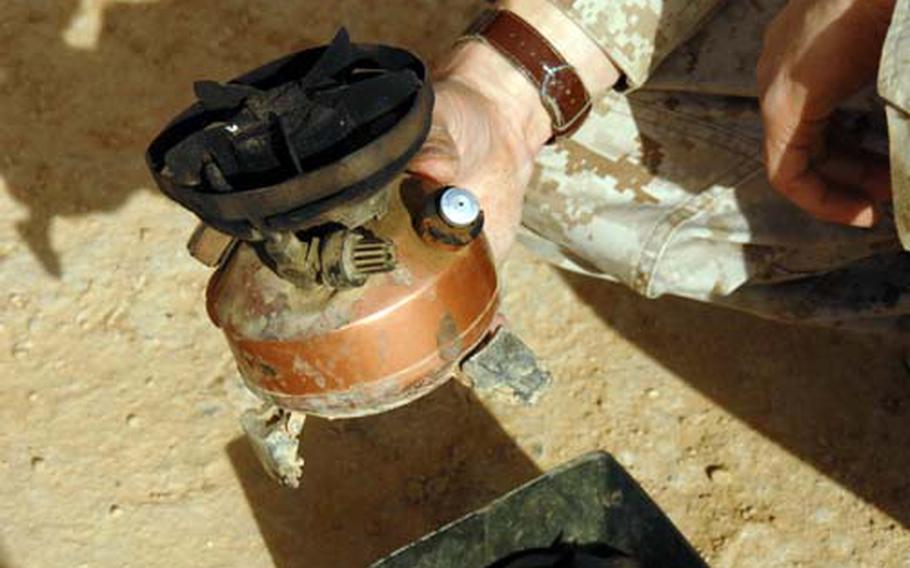 Cpl. Asa Akins holds a Coleman stove that members of Fox Company, 1st Light Armored Reconnaissance Battalion used to cook hot meals during their 87-day presence patrol along the Iraqi border. He called the stove their “most vital piece of equipment.” The 28 Marines lived out of their Light Armored Vehicles during the mission, and ate Meals, Ready to Eat, food from local markets, and Ramen noodles and macaroni and cheese they cooked on the stove. (Ashley Rowland / S&S)

AL ASAD AIR BASE, Iraq &#8212; The most important piece of equipment on Cpl. Asa Akins&#8217; Light Armored Vehicle is something that might be stashed in your garage back home.

Small enough to fit in a hungry Marine&#8217;s hand, a Coleman stove was nearly all that stood between him and a three-month diet of Meals, Ready to Eat, he said. Same for the other 27 Marines of Company F, 1st Light Armored Reconnaissance Battalion, who recently returned from an 87-day patrol in Ninevah and Anbar provinces.

During the patrol, they lived and traveled in seven-man LAVs. Sometimes they bought food from local markets, but mostly they ate prepackaged food or cooked Ramen noodles and macaroni and cheese on their stoves. Sometimes they mixed in tuna, or heated water to make coffee.

During presence patrols meant to discourage insurgent activity and smuggling along the border, the Marines rode in four-vehicle platoons and took turns keeping watch inside the LAV and sleeping outside in two-man tents.

In some of the colder areas, "you were guaranteed to wake up with your sleeping bag lined with ice," Richards said.

They strapped their food and gear to the outside of their vehicles in makeshift wire containers, and met up with supply convoys every three to four days to refuel and get food.

"It&#8217;s a survival mentality out here," Akins said. "You&#8217;re basically living out of your pack. Everything you have with you is everything you need."

Except, perhaps, running water. At one point, they went 30 days without showers.

"You go through a lot of baby wipes, I can tell you that," Akins said.

They rode through the once-violent cities of Baghdadi and Hit, and hamlets of a dozen or so houses. They said they found no insurgents. Sometimes, the Iraqis would meet them on the outskirts of their village with tea.

Richards said the region has grown much calmer and the capabilities of the Iraqi forces have improved since he was stationed at Al Asad in 2004 and 2005.

"When I was here, sometimes it seemed as if we were doing most of their jobs. Now it&#8217;s as if the locals are carrying the torch and are more motivated," he said.

After spending a few days at Al Asad for rest and vehicle maintenance, they were to leave for another patrol. Lance Cpl. Daniel Sturge said he was glad to get back to the larger base, but wants to go back to his less-regimented life in the field.

Their biggest problem while on patrol was the Iraqi children, who swarmed around the LAVs for a closer look and constantly asked for pens and candy.

They also started to learn Arabic, since there was a shortage of interpreters and they were on their own.

The phrases they used most often were "Hello," and, for the kids, "Go away."