Survey finds Americans fail to wash up during the day 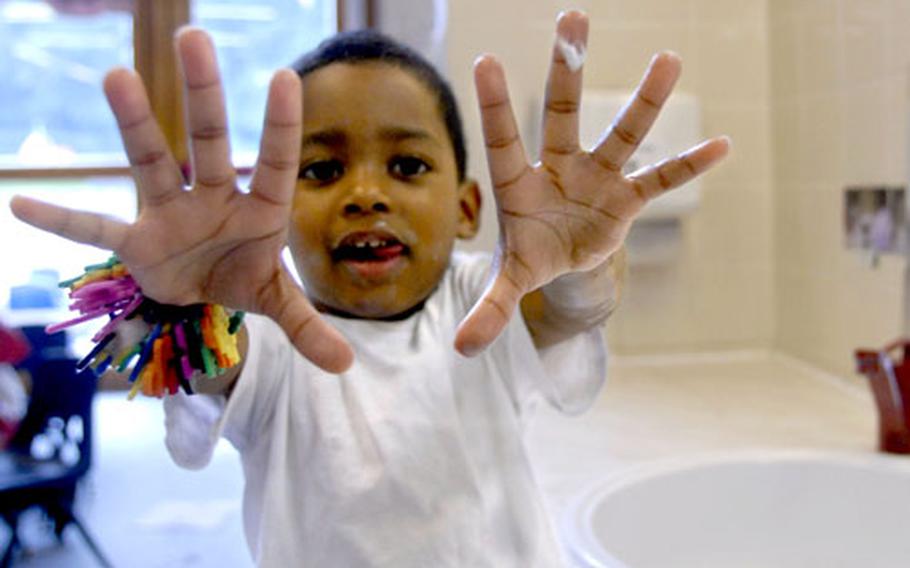 Omarian Jusino, a preschooler at the Vogelweh Child Development Center, shows how clean his hands are after a messy crafts session on Saturday. Even though many are taught as children to wash their hands, the Soap and Detergent Association gives the United States a “C-minus” for hand-washing. (Ben Bloker / S&S)

Sometimes it&#8217;s the smallest things that can do you the most harm. Germs, for instance &#8212; swarming on that doorknob, saturating the shoelace that touched the public bathroom floor, hopping onto your fingertips, careening down the crevices of your fingerprint grooves, sticking to that French fry and then falling into your gut to make all types of sickness and malady, persistently multiplying and oozing &#8230;

One preventative measure is rather simple: Keep your hands clean.

The Soap and Detergent Association reported recently that nearly 70 percent of respondents to a national survey done this year don&#8217;t wash their hands for the 20 seconds recommended by the group and the Centers for Disease Control and Prevention to remove dirt and germs.

More than a third said they seldom if ever wash after coughing or sneezing, and another third don&#8217;t wash before eating lunch. The association gave Americans a C&#8211; for washing their hands, down from a C in 2004.

Mothers enforce a clean-hands-before-dinner policy for children at the earliest ages. So why are so many adults not keeping their hands clean, when washing them can prevent sickness?

The latest report was based on a phone survey of more than 1,000 American adults earlier this year. But the association has also sent spies into bathrooms to observe people in action.

While dirty hands are nasty, and all scientific study says that washing them helps prevent you and others from getting sick, it can be a hard subject to broach, Sansoni said.