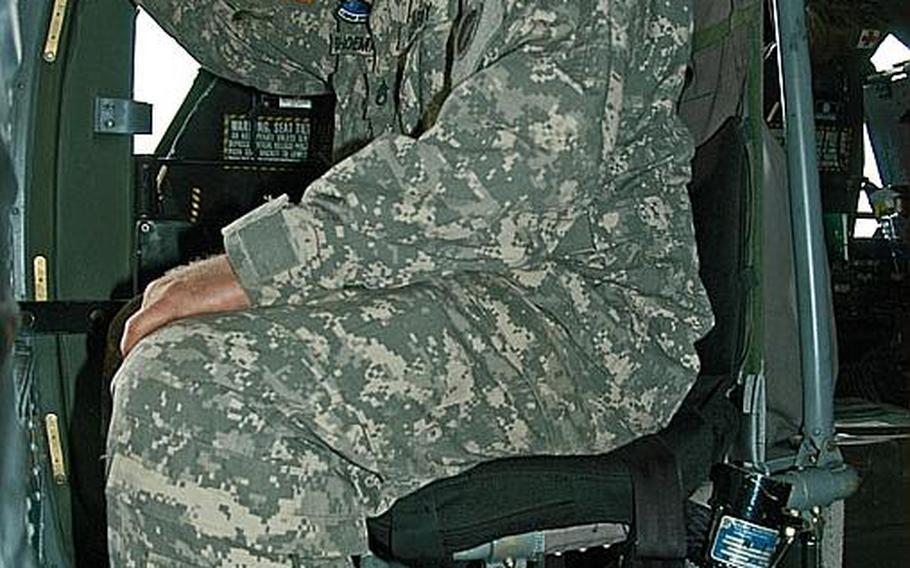 Buy Photo
Staff Sgt. Wesley Shoemaker, 33, of Camarillo, Calif., demonstrates how he sits during missions with U.S. Army Aviation Detachment Japan. Shoemaker is a crew chief with the detachment. (Seth Robson/Stars and Stripes)

TOKYO &mdash; Military helicopter pilots who suffer chronic back and neck problems &mdash; thought to be caused by long missions in constantly vibrating aircraft &mdash; have been secretly seeking treatment at civilian medical facilities for fear the injuries could jeopardize their careers, an unreleased Navy study has revealed.

Back and neck injuries were the focus of the survey of 1,800 Navy and Marine Corps aviators conducted last year, according to Kurt Garbow, director of aviation and operational safety in the Office of the Deputy Assistant Secretary of the Navy (Safety).

&ldquo;What we are finding out is that many pilots and aircrew have been going outside the military to obtain treatment because they are concerned about their ability to be medically qualified (to fly). They are afraid of losing their careers,&rdquo; said Garbow, who explained that it is not uncommon for such military studies not to be released to the public.

The results of the Navy study, obtained by Stars and Stripes, confirm what previous investigations have found.

Now, the military is attempting to gather more detailed information about the extent of the problem and come up with potential solutions, Garbow said. More than 8,000 military aviators from all service branches, including the Coast Guard, took part in a more in-depth survey last month. Dick Healing, a former U.S. Navy safety chief, who leads a team from defense consultant R Cubed that is analyzing data from last month&rsquo;s survey, said the survey asked aviators about the number of hours they had flown, the type and intensity of pain they had experienced and whether they had sought medical treatment.

Healing said there is a large discrepancy between the general population, where 20 percent of people suffer back pain, and helicopter crewmembers, where as many as 80 percent to 90 percent suffer lower back pain.

&ldquo;In the worst cases, people have had to stop flying or go into surgery for fused spinal discs,&rdquo; he said.

Poor posture and heavy gear such as body armor, helmets and night-vision goggles are believed to be part of the problem, he said. But the biggest problem might be in the design of helicopter seats.

&ldquo;A significant issue is that the seats have been designed to sustain forces of a crash with little accommodation of normal flying comfort,&rdquo; Healing said. &ldquo;Even though the crashes occur infrequently, about 90 percent of the design is focused on that rare event.&rdquo;

A panel of active and retired admirals and generals will meet in Washington, D.C., in late July to hear a report on last month&rsquo;s survey along with testimony from subject matter experts and industry representatives about potential solutions to the problem. Garbow, who retired as a Navy captain in 2006 with 27 years&rsquo; experience flying helicopters and said he is still receiving physical therapy for a sore neck, said the panel will then make recommendations to the Defense Department.

Those recommendations are likely to incorporate new technology that should be able to accommodate crashworthiness and, at the same time, provide a seat that will eliminate most or all of the pain and injuries that result from the present system, Healing said.

Helicopter crews experience &ldquo;whole-body vibration&rdquo; that is a lot stronger than what people feel in, for example, a commercial jet aircraft, he said.

&ldquo;Ten years ago the average flight in a helicopter was 90 minutes,&rdquo; he said. &ldquo;Today in Iraq and Afghanistan, it is not unusual to have six to eight hours (in the seat) so the amount of wear and tear on the body is significant.&rdquo;

&ldquo;Right now, vibration of the helicopter is transmitted directly to the seat and the only interface is a foam cushion,&rdquo; he said. &ldquo;NASCAR seats have virtually no padding at all but they are made to fit the drivers.&rdquo;

NASCAR seats provide drivers with strength where they need it and accommodate weaknesses in their posture, Healing said.

&ldquo;There is a strong case for changing not only the seats (in military helicopters) but also the whole cockpit layout so it is designed with the human being in mind rather than designing the helicopter to do a mission and then saying: &lsquo;Where do we put the person?&rsquo; &ldquo; he said.

A short-term solution might be putting helicopter crews on a regimen of physical exercises to help protect against vibration injuries, he said. Other fixes might range from putting vibration isolators between the seat and the airframe to make seats adjustable to particular body types.

&ldquo;There has to be new technology in the 21st century to bring solutions to this long-standing problem,&rdquo; he said.

Data from the latest survey will be analyzed to look at things such as the severity of aviators&rsquo; back injuries and how they might be related to the number of hours flown, types of helicopters and service components, Healing said.

It isn&rsquo;t the first time the military has examined this issue. In a 2005 study, &ldquo;Back Pain in the Naval Rotary Wing Community,&rdquo; Navy doctors Lt. Paul Sargent and Lt. Angela Bachmann described the uncomfortable posture of helicopter pilots as a &ldquo;helo hunch&rdquo; that leads to &ldquo;fatigue, overload and pain.&rdquo;

And a 2010 report released by the Army suggested that more flight time during the wars in Iraq and Afghanistan has led to more back pain among aviators.

The report cites one unit &mdash; the 160th Special Operations Aviation Regiment (Airborne) &mdash; which reported 50 pilots grounded due to herniated discs and the permanent loss of 10 pilots and 15 aircrew over three years. Each lost aviator cost the Army $200,000 to $600,000 to recruit and train, the unit reported.

Lt. Col. Robert Brinson, commander of U.S. Aviation Detachment Japan, out of Camp Zama, said the vibration hazard of helicopters was known when he joined the Army 20 years ago.

Two Camp Zama-based aviators are currently being treated for back problems, he said, adding that it&rsquo;s about time new technology was introduced to protect people against vibration hazards.

&ldquo;We come out with new devices to protect our hearing so it only makes sense that new devices will come out to protect against the vibration hazard,&rdquo; he said.